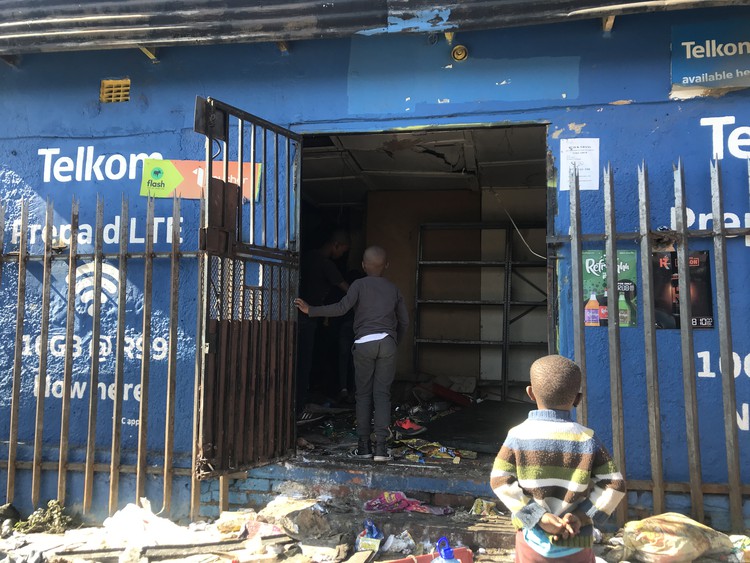 Children stand at the door of a looted shop in Alexandra, Johannesburg. Photos: Masego Mafata

Looting and protests from the weekend continued in Alexandra, Johannesburg, on Monday. Reports initially linked the protests to calls for the release from prison of former President Jacob Zuma.

Spaza shop owner Sayabo Wodimu lost all his stock and some of his equipment.

“I don’t know what I did to deserve this. My shop is the only shop on this road that was looted. There are two on the corner and they were left untouched,” said Wodimu.

He said his shop has been operating from this location for the last five years. The shop was looted at around 8am on Sunday morning as unrest broke out in parts of Alexandra and other areas in Johannesburg.

“I know the people in this community, I help them where I can, so I don’t understand why they destroyed my shop. They took clothes, groceries and even the engines for my refrigerators,” he said.

Wodimu said it will cost him about R60,000 to replace the stolen stock and equipment. “I don’t know where I will get that money because I have nothing,” he said. As GroundUp spoke with Wodimu, a group of boys carrying wooden planks ran past us, shouting that CashBuild was open for looting. 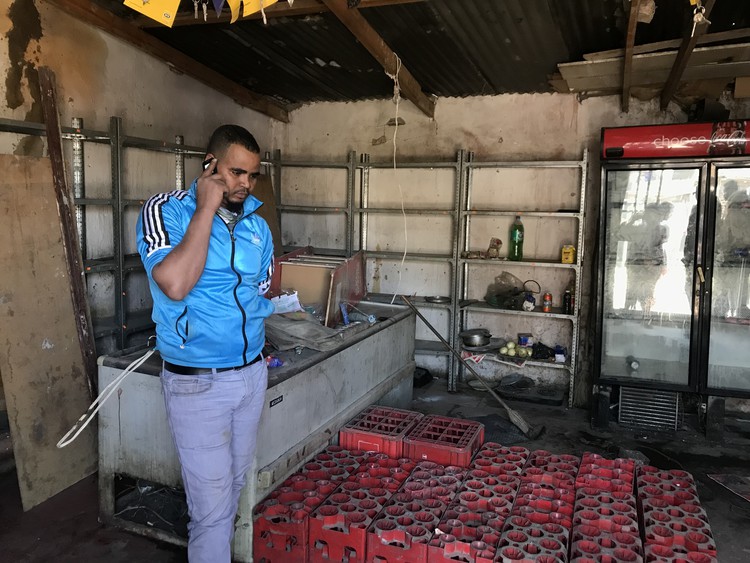 Ales Gedigano stands inside Sayabo Wodimu’s shop. He said he had been there since the morning to make sure that what remained after the looting was safe.

Larger stores in Alex Plaza were looted on Sunday, and smaller shops nearby were targeted on Monday. GroundUp saw people carrying away bags of mielie meal, cooking oil and cooldrinks.

A community member who asked not to be named said she was concerned that shop owners were being targeted.

A receptionist at a dentistry in Alex Mall who also declined to be named said that patients had stayed at home due to the unrest. She said some people were scared to leave their houses. “It’s difficult to move around because the protests have disrupted things. I had to wait much longer for a taxi this morning, when I was coming to work,” she said.

Many shops in the Alex Mall did not open on Monday morning, and the entire mall was closed by about midday.

The Gauteng provincial government has expressed concern at the impact of the unrest on people going to workplaces “due to limited access to services, and services being disrupted across the province”.

“Some provincial government services, including vaccination sites in the affected areas, have had to temporarily close due to safety concerns by both the staff and members of the public. Emergency Medical Services (EMS) teams are equally experiencing difficulty in responding to distress calls in communities due to limited access,” said Vuyo Mhaga, spokesperson for Gauteng Premier David Makhura.

Other key services have been shut down, with the City of Johannesburg announcing that the Rea Vaya bus service was suspended until further notice, and SASSA announcing that no cash points will be serviced by the cash in transit industry.

96 people have been arrested and four people have died in the unrest in Gauteng, according to a statement released by the National Joint Operational and Intelligence Structure (NatJOINTS) on Monday morning. 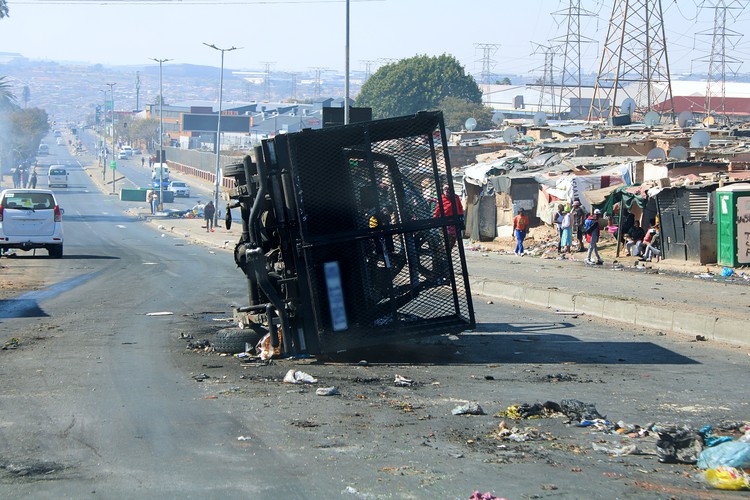 An overturned car blocks the road in Alexandra, Johannesburg.

Next:  Alexandra was already “a ticking time-bomb” says SAHRC report

Previous:  Health services in KZN struggle to function amidst looting and violent unrest