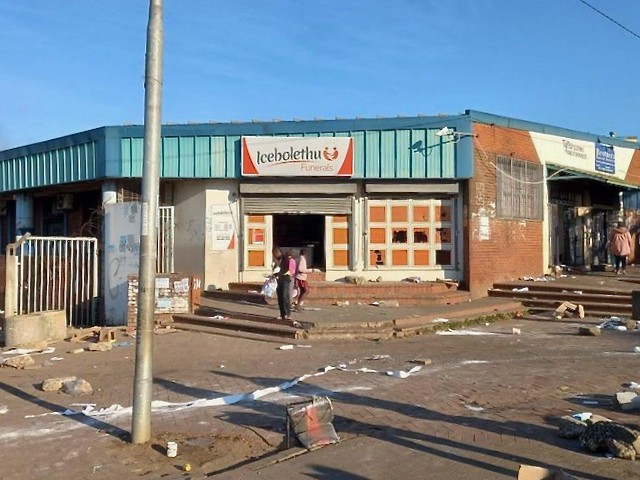 Widespread unrest and looting of shops in KwaZulu-Natal, like these at KwaMashu shopping centre, has badly impacted health services in the province from hospitals trying to function, with skeleton staff to the Covid-19 vaccination program halting. Photo: Nokulunga Majola

Health services are stretched thin by widespread violent protests that have erupted in KwaZulu-Natal. On Monday, Health MEC Nomagugu Simelane said, “A number of hospitals, community health centres and clinics across KwaZulu-Natal have been operating on skeleton staff, with many nurses, doctors, allied health workers and support staff unable to report for work due to the blockades, as well as lack of public transport.”

“Many who were working during the night shift last night also could not go home,” she said.

“There are scores of people in our hospitals who are fighting for their lives, who need to be attended to by our doctors and nurses as a matter of urgency. Some are in critical condition, in ICU, while others are in labour and need to go into theatre,” Simelane said.

“Those who are protesting need to realise that by blocking health workers or ambulances from doing their job, they could be placing the lives of their own relatives in jeopardy,” she said.

An ambulance driver based at KwaMashu Community Health Care Centre told GroundUp there was a group of people in the morning who wanted to get inside the centre, but security managed to stop them. “We have been sitting here all day. There is nothing we can do. I only saw one nurse this morning and since then the clinic has been closed,” he said.

A patient currently on oxygen at a Durban hospital, said, “They are working flat out but with no transport services, they are understaffed. As a government hospital, I have to say I am impressed with the workers. I am just heartbroken that ordinary citizens have to suffer because no help can come to the premises.”

The City of eThekwini closed its clinics. “The ongoing civil unrest has also affected community vaccination sites which have been unable to operate today,” the City said in a statement.

“The protests have all but put a stop to the province’s all-important Covid-19 vaccination programme,” said Simelane.

“In Howick an ambulance was burnt, while another was attacked with rocks in Marriannhill. There have also been reports of delays with the collection of mortal remains, as Forensic Pathology Services battle to reach scenes where people have passed away. They are also unable to collect bodies from Primary Health Care facilities (clinics) that do not have mortuaries,” she said.

On Monday morning, 123 people had been arrested in KZN. Police also reported that there were six deaths. “In KwaZulu-Natal there is a report that two people were killed, one in Inanda and the second person in Umbilo. The circumstances leading up to their deaths is under investigation. The extent of damage to property and the looting of businesses will be determined at a later stage.”

Meanwhile, the cabinet has taken a decision to deploy the SA National Defence Force.

Next:  “I don’t know what I did to deserve this” says looted shop owner