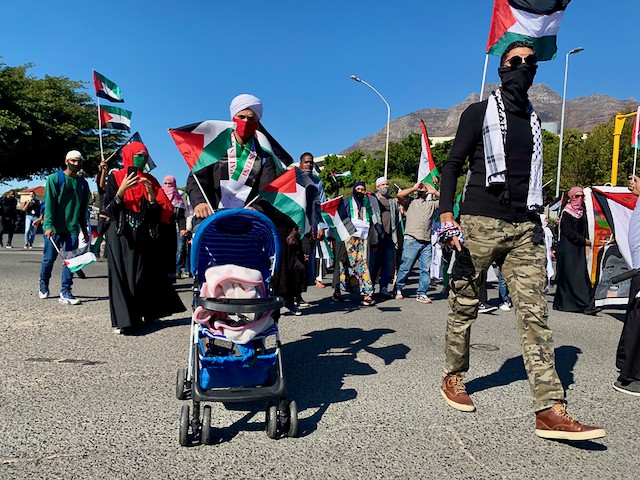 About 300 people marched to Parliament on Tuesday afternoon protesting against the recent deadly Israeli air strikes in the Gaza Strip.

About 300 people marched to Parliament on Tuesday afternoon to protest against the recent deadly Israeli air strikes in the Gaza Strip.

Riaaz Khan said he joined the protest because of the “atrocities being perpetrated” in Palestine. “Innocent women and young children are being killed by the Israeli government and the occupiers of Gaza,” he said.

“They [the South Africa government] must take our message out to the global community,” he said.

Athlone resident Gadija de Vries said, “When I see young children and mothers being killed it makes me cry as a mother.” She said she hoped the protest would help stop the killing of women and children.

At the gates to Parliament, Martin Jansen, Palestine Solidarity Cape Town branch chairperson, delivered a memorandum to the Department of International Relations and Cooperation.

He said the protesters were “expressing our frustration with the South African government for not doing anything meaningful in support of Palestinian liberation”, and “we are calling on the South African government to adopt boycott, divestment and sanctions legislation that will prohibit and prevent all South Africans from doing business … with Israel. Whether it is academic relations, cultural, sport, [or] especially political relations, [it] must come to an end”.

DIRCO spokesperson Lunga Ngqengelele said his department will study the memo and “engage” with other departments.

Next:  Explainer: The loopholes police use to protect their own