Workers have been on strike since November 2021 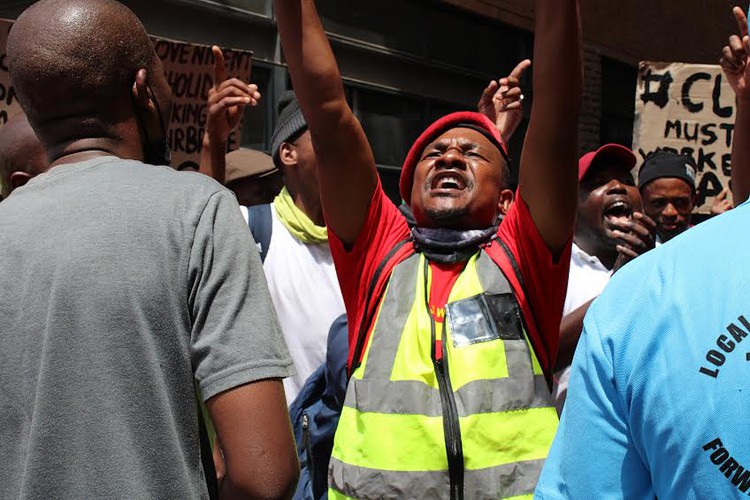 Collin Matjena, who has been working at Clover for the last 13 years, said it has been difficult to make ends meet during the strike. Photo: Masego Mafata

“We strike because our employers leave us with no other option,” says Collin Matjena.

Matjena, who has been working at Clover since 2008, was one of hundreds of Clover workers affiliated to the Food and Allied Workers’ Union (FAWU) and the General Industrial Workers Union of South Africa (GIWUSA) who picketed outside the Department of Trade, Industry and Competition in Pretoria on Thursday. The workers were calling on the department to intervene at Clover to stop retrenchments and factory closures.

“When we strike, we know it’s ‘no work, no pay’. We are surviving on savings from previous earnings and we hope our demands will be met so the strike can end,” Matjena said.

The South African Federation of Trade Unions (SAFTU), the Palestinian Solidarity Alliance and the Workers and Socialist Party joined the picket in solidarity with the workers.

“Since the beginning of the strike in November last year, we have written several letters to the Minister [of Trade, Industry and Competition]. Up to now, he has not officially agreed to a meeting so we have decided to come here and show our dissatisfaction,” said John Appolis, GIWUSA general secretary.

“Government cannot sit idly when the manufacturing industry is being dismantled,” he said.

Clover merchandisers, who pack and stock Clover products in shops, said their jobs are on the line and they fear the number of job cuts will increase beyond 2,000.

“We got dismissal letters for failing to sign and accept salary cuts last year and for participating in the strike,” said one merchandiser who asked not to be named.

The group of merchandisers has lodged a case of unfair dismissal with the Commission for Conciliation, Mediation and Arbitration (CCMA) which will be heard on Tuesday, 18 January. Earlier this week, workers managed to secure an agreement with Clover at the CCMA that overdue bonuses would be paid by Friday, 14 January.

In Cape Town, about 30 people picketed outside Parliament calling for a boycott of Clover products.

In a memorandum read out by Appolis, the workers demanded that the DTIC put pressure on Clover to reinstate all workers and facilitate the process of making Clover independent of the Israeli company Central Bottling Company which owns Clover through the Milco SA consortium.

Sebei said GIWUSA had been objecting to Milco’s involvement in Clover since 2019 “in solidarity with oppressed people of Palestine”.

Malebo Mabitje-Thompson, acting director general at the DTIC, accepted the memorandum on behalf of Minister Ebrahim Patel, who she said is recovering from Covid. “I’ve heard all your grievances and our commitment is that we will respond to the issues you raised,” she said.

She did not say when the workers would receive a response but she said the department was already in consultations with the Industrial Development Corporation and the National Empowerment Fund to assist Clover workers.

The workers then marched from the department to the Union Buildings.

SAFTU General Secretary Zwelinzima Vavi said union officials from SAFTU, GIWUSA and FAWU would meet on Thursday evening to speak about intensifying the strike. He called on all workers to boycott Clover products.

In a statement released on Thursday, Clover management said trading conditions were difficult with poor economic growth, rising costs and subdued consumer spending. Covid had added to these pressures. “For these reasons a comprehensive strategic review of all aspects of Clover’s business was undertaken, which led to the difficult decision to restructure.”

Clover said it had explored “all possible avenues” to minimise retrenchments.

The company had not responded to GroundUp’s questions by the time of publication. 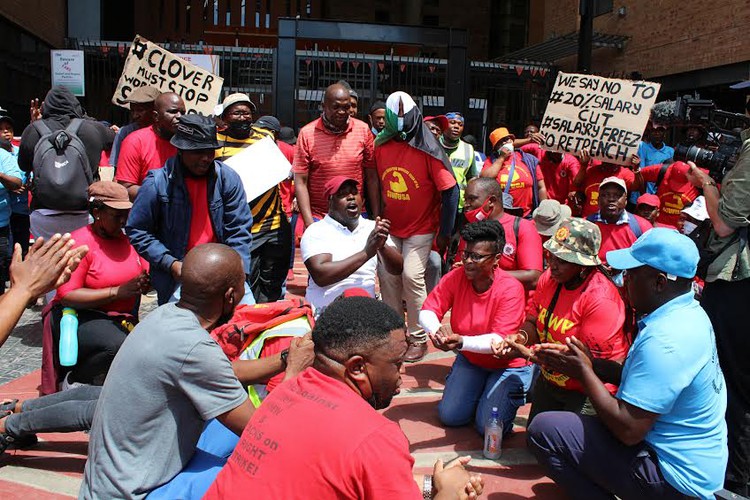 Picketing Clover workers called on the Department of Trade, Industry and Competition to intervene to save jobs at Clover. Photo: Masego Mafata

Next:  Durban beach goers continue to swim despite warning signs