Reclaim the City used Workers’ Day to step up their campaign for access to affordable housing near Cape Town’s city centre. The housing activist group occupied a lawn belonging to the Atlantic Green Point Bowling Club on Wednesday morning.

The activists also constructed a wall made of concrete blocks, measuring about six metres in length and nearly two metres high. Lukhanyo Madyibi, Reclaim the City’s leader in Sea Point, said the wall symbolises the need for affordable housing on Green Point’s prime public land, some of which is currently used for bowling greens. Activists told GroundUp that the wall is the start of a house, and it is now the City of Cape Town’s job to finish building it.

Some placards read: “Distribute golf club land for affordable rentals”, “I pay R5,000 per month but you pay R1,000 per year VOETSEK” (a reference to the rent golf clubs are paying for City-owned land), and “You should be ashamed”.

They also placed red flags with Reclaim the City’s logo on the poles of the security fence of the bowling club.

SAPS and Metro police officers arrived at the scene and spoke briefly to the protesters. No arrests were made and the protest dispersed without incident in the late afternoon.

“We have a historic acute shortage of housing. We have been campaigning for decent housing in Sea Point, Cape Town city centre, and Woodstock. This site has been identified by the City as a site to build social housing. That in itself is a victory for the black workers who live and work in this area,” said Lucas.

He said it has been more than a year since City officials “earmarked the site” for social housing.

Green Point is a formal “white middle-class area” and post-apartheid has maintained that particular image and it is our objective to undo that, said Lucas. “Black workers have delivered services to their employees for many years in this area and have to travel from the Cape Flats to provide labour. … It is our view that they too should live and enjoy the benefits of this part of the city.”

Mayco Member for Safety and Security JP Smith wrote in response to the protest: “The South African Police and City enforcement services responded to the violation of the Prevention of Illegal Eviction and Unauthorised Occupation of Land Act. The persons occupying the bowling green vacated it within 20 mins after being addressed by SAPS. The structure erected on the bowling green will be removed by the morning. As with any reported land invasion, policing resources were required to be redeployed from other parts of the city. This may have given rise to the renewed shooting that was thereafter reported in Manenberg after Metro Police were redeployed to Green Point in response to the reported land invasion.”

Ashura Eaton was one of the protesters. She is unemployed and looks after her three children. She cannot afford her rent, and she says her electricity and water have been disconnected. She is facing eviction. To cook and access water she uses the facilities of the former Woodstock Hospital, which several hundred people have been occupying since March 2017. She said the City needs to understand that land such as the bowling green needs to be made available for housing “for us to be able to come back to the inner city where we belong”.

Ndifuna Ukwazi spokesperson, Zacharia Mashele, whose organisation supported the protest, said it is unjust that the Green Point Bowling Green is leased from the City for R1,000 per year. 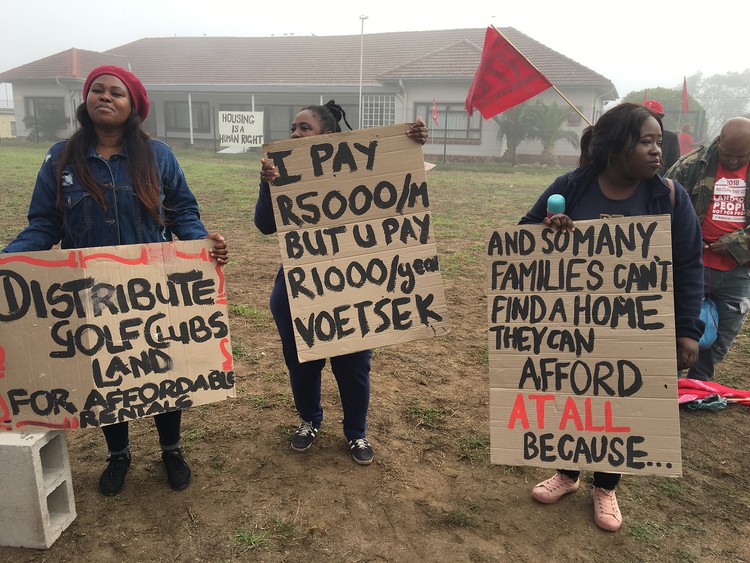 Next:  Cameroonian refugees in Cape Town can’t get legal status

Previous:  Workers’ Day: This industry is not what it used to be, says clothing worker