Porters lost their jobs when a new contractor was appointed 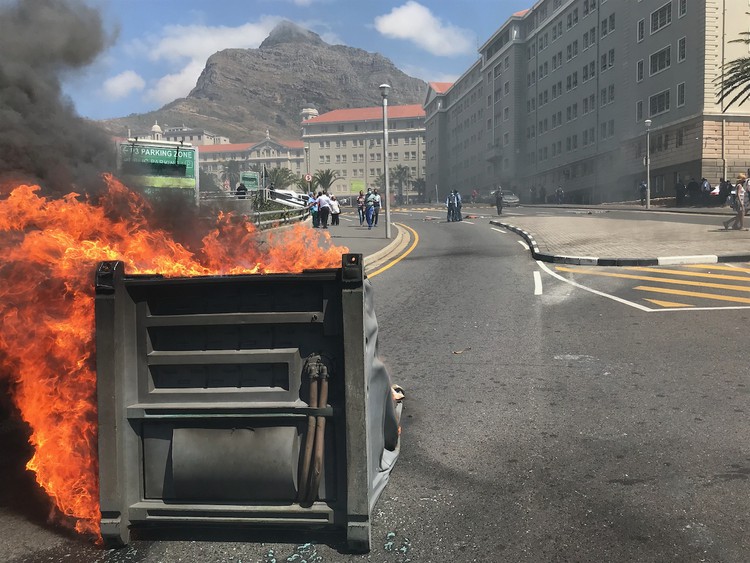 Hospital porters, protesting over the loss of their jobs after a new company was contracted to provide portering services, burnt rubbish bins, mobile toilets, chairs and other materials at the entrance to Groote Schuur on Tuesday. Photo: Steve Kretzmann

The entrance to Groote Schuur hospital was blocked with burning rubbish bins and portable toilets shortly after noon on Tuesday by hospital porters who have lost their jobs after a new company took over the portering contract from 1 March.

A group of about 100 porters waited outside the hospital for the outcome of negotiations with hospital management which began on Monday.

When a delegation from the EFF, which the porters had requested to negotiate on their behalf, announced shortly that no progress had been made, the porters dragged plastic rubbish bins and a mobile toilet into the road and set them alight, effectively blocking ambulances from getting to the trauma unit.

Signposts, paving blocks, and other material were also dragged into the road, hindering patients trying to leave the hospital parking area as security guards idly stood by and a group of about 30 EFF members, clad in red uniform, looked on.

A hospital worker who attempted to bring a fire extinguisher to douse the flames was accosted by the protesters and forced to retreat.

As black smoke billowed toward the hospital entrance, police arrived from 12.30pm. At least two rubber bullets were fired at the protesters. Stun grenades were also used.

Deputy chairperson of the EFF in Cape Town Ntsikilelo Tyandela said a new tender had been awarded to a company called Zara, replacing SD, a company that had long held the contract.

Tyandela said some of the porters had held their jobs for eight, and even 20 years, and had worked through the Covid-19 pandemic, but the new company had not taken them on.

Hospital management had been advised to insource the porters, which would prevent such situations in the future, he said.

Inside the hospital, the newly appointed porters were asking patients for directions to various wards, appearing to indicate that they lacked orientation training.

Khangelani Mabentsela, who has been working as a porter at Groote Schuur for ten years, said he was only informed on the weekend that he would no longer be employed come 1 March. “How am I supposed to feed my children and family with no job?” he asked.

Porter Thuliswa Fadana who has worked as a porter at the hosptial for six years, said, “It doesn’t make sense why they didn’t insource us.”

She said she earned R2,000 a month with no benefits, and worked eight to 12-hour shifts four to five days a week.

“They told us on 27 February that our contracts won’t be renewed. Groote Schuur said they are not involved in this because we work for an agency. It’s as if we don’t work here,” she said.

The provincial health department condemned the disruption. It confirmed that the new contract was concluded at the end of February. “Members employed by the service provider felt it necessary to stage their protest at the hospital, which is not their employer,” the department said.

“A hospital is a place where vulnerable people go for medical services and such disruption not only impacts on the hospital’s capability to ensure uninterrupted service delivery but can also cause mental trauma.”

Next:  PRASA lets stations go to ruin on Pretoria-Pienaarspoort line