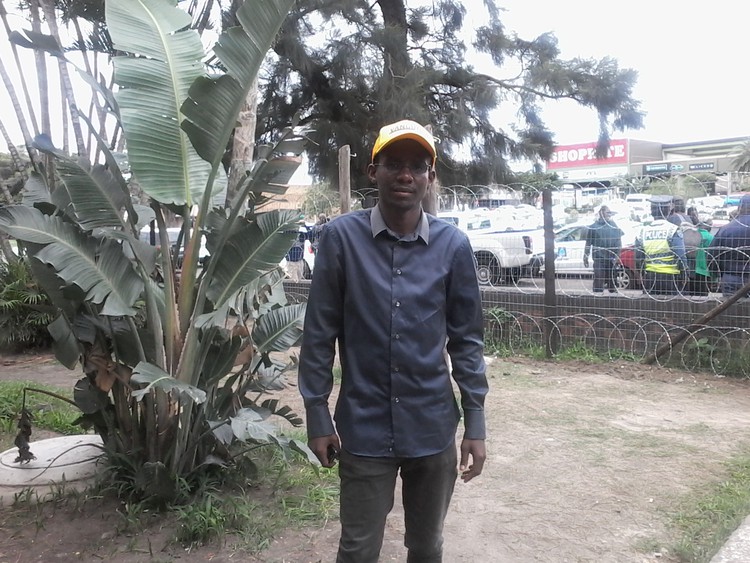 About a month ago, aspiring artist Njabulo Khuzani was reunited with his family after moving into one of the eThekwini Homeless shelters at the start of lockdown in March. Photo: Nokulunga Majola

“Not everything that came out of this Covid-19 situation was bad,” says aspiring artist Njabulo Khuzani.

Khuzani is one of the many homeless people who were moved into eThekwini Homeless shelters across Durban since March as part of the municipality’s attempt to mitigate the spread of Covid-19.

About a month ago, Khuzani, 29, from Mpangeni in northern KwaZulu-Natal, was reunited with his family. He has been living on the streets of Durban since 2017. “When I left home, I had stolen money to feed my gambling addiction and when I returned home to ask for forgiveness, my mother and the rest of my family welcomed me with open arms. I was afraid at first but after meeting with them, I know that I am still loved.

“If it was not for the municipality’s homeless programme, I wouldn’t have been discovered,” he said.

Khuzani was speaking at the World Homeless Day event hosted by eThekwini Municipality at the Bellhaven Memorial Hall on Saturday. The City’s interventions included reuniting homeless people with their families, providing access to employment and business opportunities, drug rehabilitation, access to health services, skills development and training, access to education and giving them accommodation during the peak of the Covid-19 outbreak.

According to the City, it spent R66 million on homeless people during the first three months of lockdown. There are still over 700 homeless people living in shelters, it said.

“The outbreak of the Coronavirus brought something good for me as I got to stay at the shelter where I got all the help I needed to kick this bad habit and start afresh,” Khuzani said.

Khuzani said that during his time at the shelter, he met renowned musician Thina Zungu who is helping him record his first music album. He will continue living at the shelter until his album is done.

Thabiso Dladla, 30, from Umlazi said that even though he has not yet found a job, he too was happy to have found his maternal and paternal families. Dladla said he left home at a young age. “My father died when I was nine and my mother when I was ten. Both my parent’s families took care of me until I was old enough to be on my own. It has not been easy on the streets but I am grateful for the opportunity to change my life,” said Dladla.

He said when lockdown started, he went to live at the shelter where he received treatment and has since stopped using whoonga. “I want to be with my family but at the moment, I am going to continue living at the shelter until I get a job. They have welcomed me back into their lives and the least I can do is to find something to do or go back to school to start a new life for myself,” said Dladla.

EThekwini Deputy Mayor Belinda Scott said: “With the continuous interventions and comprehensive plans to aggressively address homelessness in the city, we are also contributing to the realisation of the National Drug Master Plan which aims to reduce supply and demand of drugs for non-medicinal use, increase harm reduction treatment approaches and prevent new drugs from entering the market.”

Scott said the success in helping hundreds of homeless drug users was a direct result of their partnership with civil society. “We couldn’t have done this without the help from the Department of Health, the Department of Social Development as well as all of our medical NGOs,” she said.

Scott said they are looking into a more sustainable program which will include establishing safe spaces for homeless people.