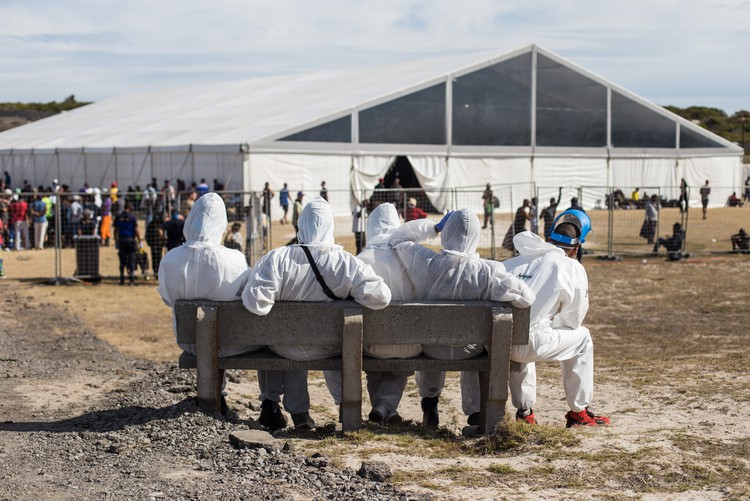 A woman has tested positive for Covid-19 after leaving the City of Cape Town’s Strandfontein camp for homeless people. Archive photo: Ashraf Hendricks

After leaving the City of Cape Town’s Strandfontein camp for the homeless, established for the national lockdown. a woman has tested positive for Covid-19.

The woman, who had no symptoms at the time of the test, left Strandfontein on Monday, along with five other people who had stayed in the camp since its inception. The six were immediately taken for a privately administered PCR test at a Dischem pharmacy. One result , which was positive, was returned yesterday, while the other results are still pending.

The woman had been staying in a tent administered by the Haven night shelter. Initially, she had been living with 600 other people, but was moved to a smaller tent that housed about 200 people.

Speaking to GroundUp, Jesse Laitinen of Streetscapes, who collected the group of six from Strandfontein on Monday, and who has subsequently been tested and has self-isolated, said that the woman was presently staying in a room by herself at one of the shelters administered by Streetscapes.

Laitinen said that the group had been screened upon leaving the camp, but could not confirm whether the screening was only verbal or involved a digital thermometer. Laitinen did say that one member of the group that left Strandfontein, but not the confirmed positive case, had symptoms that could be Covid-19.

Streetscapes manages two shelters, one in Walmer Estate that opened on 1 May, and another in Kuils River. In total, 40 homeless people live in these shelters. They also have 35 more people who are beneficiaries of its programme. There are 16 staff, half of whom are now isolating pending test results.

Laitinen said people wanting to support Streetscapes could purchase Jason Whitehead’s My Lockdown Cookbook for R99, of which R50 goes to Streetscapes.

“The City of Cape Town has been informed that one of the persons moved off-site to a smaller shelter had tested positive for COVID-19.

“In keeping with all protocols, this asymptomatic individual was screened at least three times by City Health officials. The results of these screenings were negative. A test conducted by the organisation at a private facility found a positive result.

“City Health is assisting the NGO with case management at the shelter, and in the process of tracking and monitoring others who were transferred to other facilities during this period.

“The individual is currently in isolation and remains asymptomatic.

“The City’s Health Department, supported by external service providers, are currently assessing the position on site at Strandfontein.

“The City is aware of the misinformation being shared by an appointed Human Rights Commission monitor.

“The monitor has once again failed to consult with the City to verify the information prior to distributing the report to other organisations.

“The City must dispel this misrepresentation of the facts and will impress the necessity to follow the necessary protocols when screening and testing all individuals.

“It is irresponsible for this monitor to create ill-informed mass hysteria.”

The City is currently engaged in litigation against the South African Human Rights Commission (SAHRC). The City is seeking an interdict against the SAHRC, which is represented by the Legal Resources Centre. The matter was before the Western Cape High Court on Thursday, and was postponed to 20 May. GroundUp spoke directly to Laitinen regarding this story, not the SAHRC.

*This article was updated to correct when the matter between the City of Cape Town and the SAHRC resumes in the Western Cape High Court.

Previous:  How we are dealing with Covid-19 in care homes