Hundreds of shacks destroyed and one person killed

A raging inferno killed one person, destroyed hundreds of shacks and displaced about a thousand residents in SST Section, Khayelitsha on Saturday morning.

Mayoral Committee Member for Safety and Security JP Smith said one person had been confirmed dead. Estimates of the number of people displaced have varied and at the time of writing it appears that about a thousand people have been left homeless. We have no information on the person who died yet.

Residents we spoke to said the fire started at about 2:30am. As is often the case with shack fires, the cause is unclear.

At 1pm fire-fighters were still dousing small, stubborn fires in various parts of the informal settlement, popularly known as Blowy.

The high winds blew ashes up, causing them to cover the faces of the people who had lost their life’s belongings, and who were still trying to salvage their building materials. 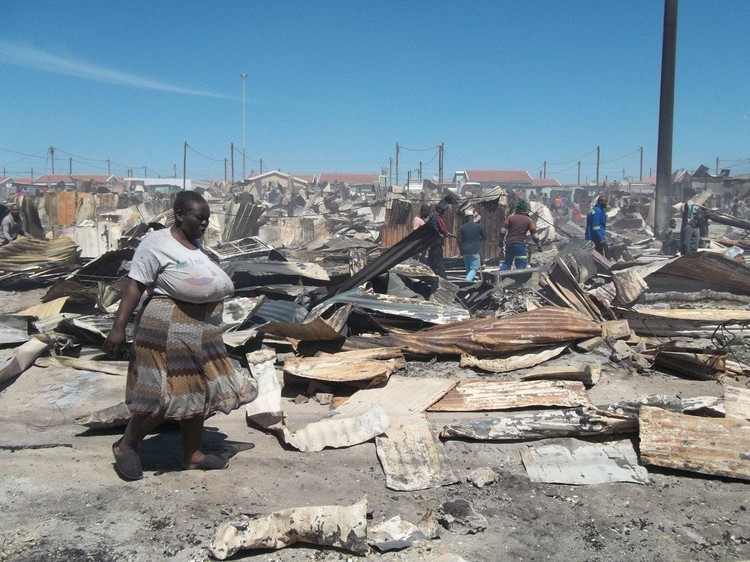 Nomveliso Gxiya wanders through the rubble of what used to be her home.

Nomveliso Gxiya (37) said she was asleep when smoke filled her shack and woke her up. I rushed out of my shack, saw a huge blaze approaching my shack and pulled my children out before I called out to my neighbours,” she said.

Gxiya said she frantically moved out her wardrobe, fridge and bed, but her children’s clothes and another wardrobe burnt.

“I decided to simply move my belongings out and made no effort to put out the fire because it was already big. Besides, the communal taps are located far from my shack,” she said.

Gxiya said the shack dwellers made no attempts to extinguish the fire as they scrambled to pull their possessions out of their burning shacks.

Wearing a T-shirt, a skirt and slippers, she said: “I have no clothes other than the ones I’m wearing.” She said the fire had left her and her children, aged nine and 19, without a place to lay their heads.

Phathiswa Pensele said the fire burned her shack in which she stayed with her boyfriend and her two children, aged one and three. “When I woke up, the fire had already damaged nearby street lights, so I could not see through the black smoke. The only thing visible was a huge blaze coming my way.”

Pensele said: “I watched the fire as it destroyed other shacks and screamed aloud when it reached mine.”

She was lucky enough to manage to move out all her belongings, but her shack burned.

Pensele said she saved money to buy building materials to erect her shack while working as a grape picker at a farm in De Doors in 2004. “Now I have no money to buy more building material. I don’t know where I will sleep tonight,” said Pensele. Currently, she works as a rubbish collector in Blowy. She said her attempts to move her belongings had left her drained of energy.

Andisiwe Ngubo said she was woken up at about 3am on Saturday. “Residents who were drinking alcohol nearby shouted and told us to wake up as the fire was engulfing our shacks,” she said. “I stepped out of my shack wearing only pyjamas and saw the inferno approaching before pulling my children out of their shack and fleeing.”

The fire destroyed her children’s school uniforms, SASSA cards, ID documents, schoolbooks, bed, birth certificates and her other possessions. “Now I have nothing to wear except these pyjamas as the fire destroyed all my belongings,” she said.

Ngubo said she has no job and lives on her children’s government grants. “I have no money to buy building materials to rebuild the shack. If the City doesn’t give me building materials, I will sleep outside,” she said.

Ngubo was hungrily eating bread as she spoke to GroundUp. “I’m famished, confused and shocked as I speak,” she said trying to regain her energy. 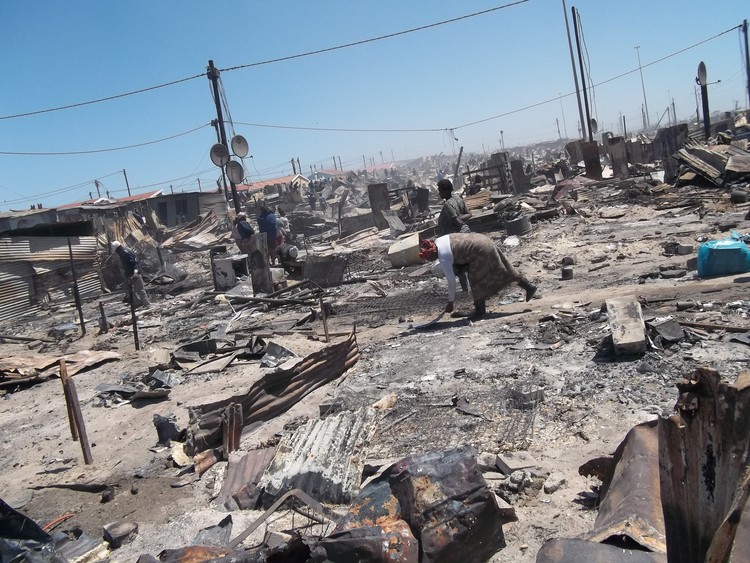 A scene that is far too common in South African informal settlements.

Community leader Nobom Twayise said the fire would have not caused so much devastation if the shacks were not built so close to each other. “We now want the City to remove some residents and place them elsewhere so that there can be space between shacks,” she said.

Twayise said, “If the shacks were not closely clustered, the fire-fighters would have easily entered Blowy to douse the blaze and it would not have destroyed so many shacks …Paramedics can’t enter Blowy; residents must carry a sick person on the shoulders to a nearby street where ambulances wait.”

Asked about the request for removal of some shacks, Councillor Anda Ntsodo said: “No, they can’ be relocated elsewhere. They will be returned to where they stayed before the fire happened.” He said the City has a plan to upgrade all informal settlements but it would kick off with the oldest ones located in Site B and Site C, Khayelitsha.

Asked about potential plans to upgrade Blowy, Ntsodo said it doesn’t feature in the City’s financial plans for this year but it would do so next year.

Western Cape MEC for Human Settlements Bonginkosi Madikizela visited the area. “We plead with the fire victims to allow the Disaster Management department to clear up debris,” he said.

Madikizela said he was anxious that a similar fire might break out in the future and wanted to turn the informal settlement into a serviced site. “We need to deal with a resettlement plan and a long term plan. My view is that we clear up the site and allow them to return and rebuild their shacks in such a way that basic services can be provided.”

When Madikizela mentioned a “long term plan”, Thoba September cut him short, saying the plan never materialized in Hout Bay. He said the mayor had promised to build houses for the fire victims there but it has not happened.

Some residents were not impressed with Madikizela’s intentions to help the fire victims. “You are a failure Madikizela. Where is the land?” shouted local youth leader Mxolisi Godongwana. 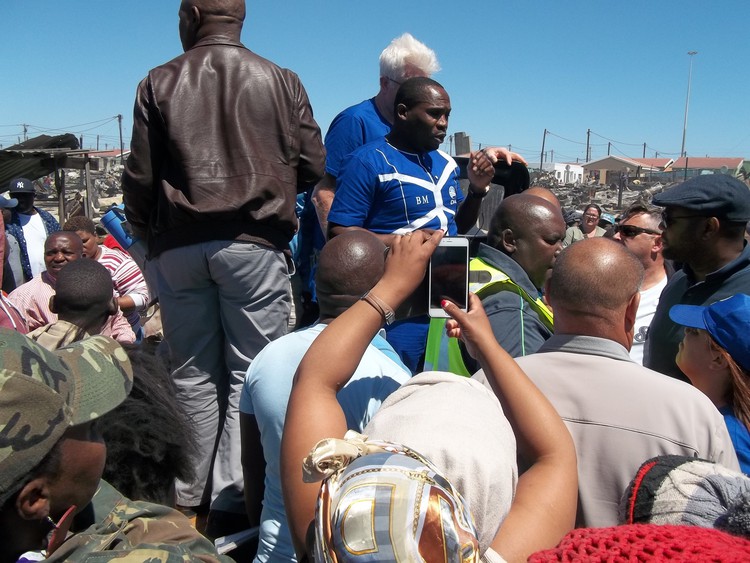 MEC for Human Settlements Bonginkosi Madikizela visited the area shortly after the fire.

Meanwhile on Sunday morning, authorities, including the City’s Disaster Management unit, were counting and registering victims of the fire. JP Smith wrote that the site is being cleared by the Solid Waste Department. Smith said that people will then be allowed to “resettle in an orderly manner”. He said the City wants to “keep access routes clear to allow for services to be reinstalled. Firebreaks will be maintained between structures to allow for formal reblocking to take [place] afterwards.”

Given past experience, where people begin rebuilding their shacks immediately after a fire, and that building firebreaks would require moving some people elsewhere, it’s unclear how this plan can be carried out, at least in the short-term.

Smith also said fire victims will be provided 3,000 meals on Sunday, as well as kits to help them rebuild their shacks. The kits include sheets of corrugated metal and plastic, wooden posts, nails, a window, a door and a frame for the door.

Donations and relief materials can be dropped off at the Khayelitsha Fire Station.

Money donations can be made to the Mayoral Relief Fund (GroundUp has no responsibility for this account or how the funds are spent):
Bank: Nedbank
Account: 1158667043
Branch code: 198765
Ref: A009

Next:  Fire leaves over 1,000 people homeless in Philippi