Heads-up: Making smileys has been in Noluthando Gaika’s family for four generations

It’s a windy afternoon at the corner of NY6 and NY147 in Gugulethu and customers are arriving to pick up their orders of Noluthando Gaika’s famous sheep heads, sheep feet and cow feet.

The stand where she sells her smileys is called Ezintlokweni (the heads).

Gaika says the business of making smileys has been in her family since the early 1980s, started by her grandmother. “My mom and her siblings were taught by great-grandmother how to do everything, from cleaning the smileys to cooking them. They used to make about a hundred smileys a day. Great-grandmother operated the business from right here in this house.”

“She came up with the idea because it was becoming a struggle for her financially since she was the only one with a job in the family. So we started selling from the house again. The business was a success from the get-go, but we ran into a problem of space. We couldn’t make the number of smileys that we wanted inside the house,” explained Gaika.

That is when they erected the corner stand. And because of her mother’s ill health, she took on the business. 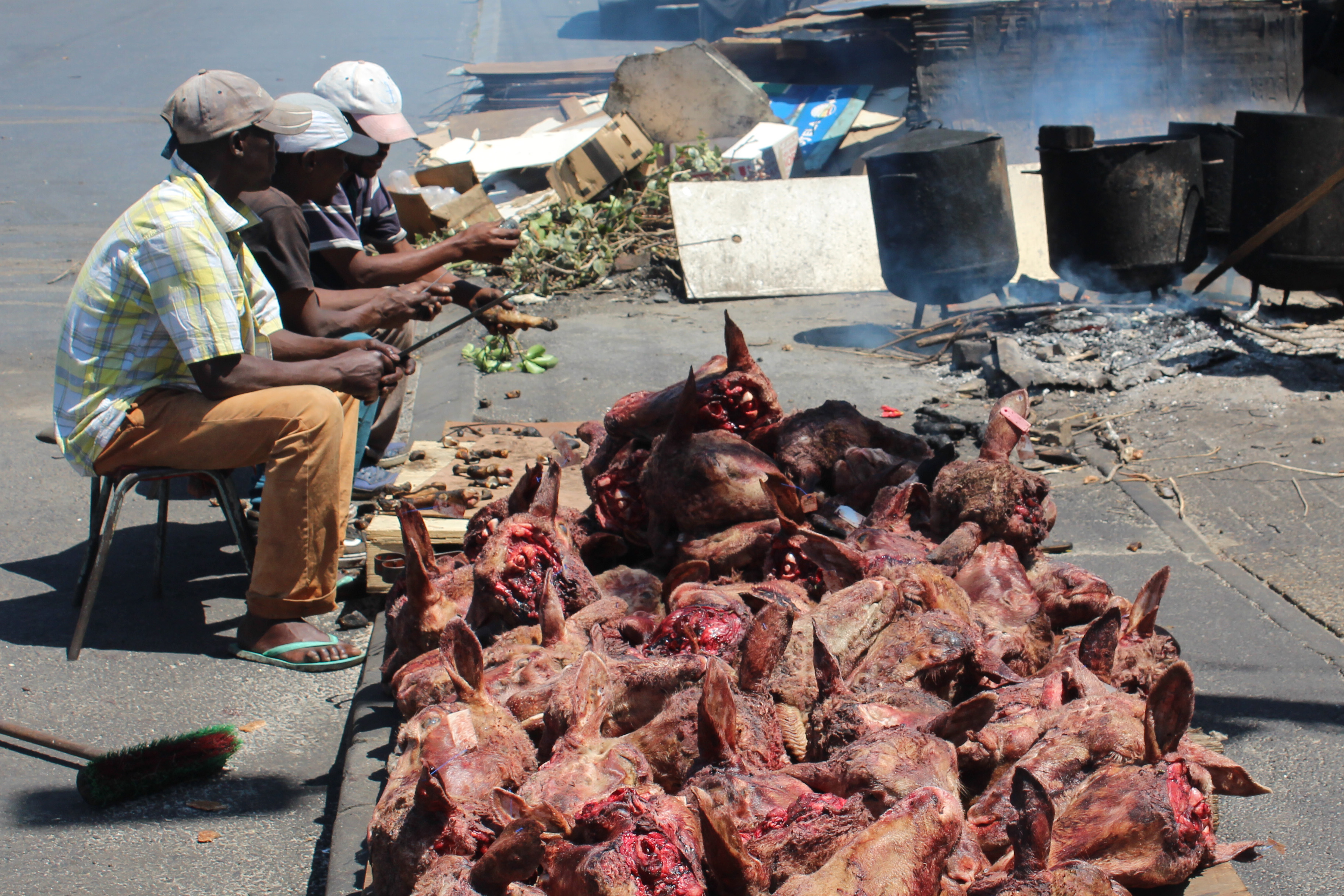 Mlindi Fuku, Jafta Mario and Shaun Dukashe prepare sheep feet that have just been charred. In the foreground are the smileys. Photo: Mary-Anne Gontsana

At the stand, which is just a few steps away from Gaika’s home, Bonny Gotyiwa from Barcelona informal settlement uses a long wooden stick to char the smileys which have just been shaved on an open fire.

Not far away sit Mlindi Fuku and Jafta Mario, also from Barcelona, with Shaun Dukashe from NY6. They are cutting and scraping the sheep feet that have just been charred.

Inside the stand sits Thembalethu Mazinyo, who chars the sheep feet using a blow torch. Beside him, Lista Mcilongo and Desmond Mayekiso, who are tasked with the responsibility of scraping the feet using a silver pot scraper. All three are from Barcelona informal settlement.

Once the heads and feet have been charred and scraped, they are soaked and washed to remove any leftover hair and the brain. Then they are put into hot boiling water to cook for up to an hour.

The stand is open Monday to Saturday from 8am until 9pm. Gaika sells her smileys at R70 for a whole head and R35 for a half. A sheep foot costs R5 and a cow foot R39.

She gets her stock from a meat shop in Maitland and sometimes from a supplier in Gugulethu.

She also has a company which does catering for parties, funerals and other private functions, but Gaika says Ezintlokweni is where she makes the most money. Her team prepares about 180 smileys a day or even more at certain times of the month.

With customers coming from as far as Parklands, Khayelitsha and Pinelands, and with no immediate competition, Gaika says she advertises her business on Facebook and Whatsapp, but depends heavily on word of mouth.

“Ezintlonkweni is what makes me capable of putting food on the table.”

Next:  Township schools run sports events in the street