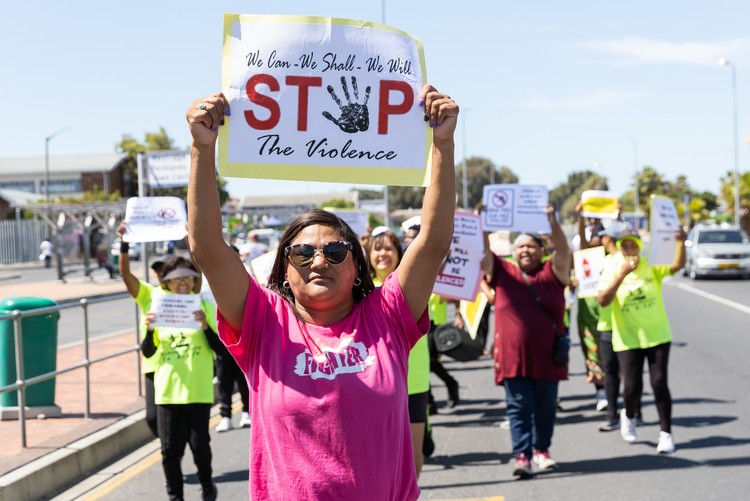 Martina Martin was one of the 50 protesters who marched through Hanover Park in Cape Town, calling for an end to gang and gender-based violence. Photos: Ashraf Hendricks

“The government has failed me and so many other families”, says Washiela Samuels whose son was tragically shot dead eight years ago in Hanover Park. She is yet to see justice for the murder, allegedly committed by a gang member.

On Monday Samuels joined 50 other residents, most of whom were women, who marched through the streets of the community, calling for an end to gang and gender-based violence.

During the march, people chanted “We want change” and “Stop women and children abuse”. At one point the group stopped outside Galway Court, a beige and visibly weathered block of flats. According to protesters, gang violence recently flared up at this block of flats, causing tensions to erupt in the community.

“We really need Hanover Park to get together and fight [against violence],” says Samuels. The march, organised by The Alcardo Andrews Foundation, was also supported by other community-based groups to mark the 16 Days of Activism against Gender Based Violence campaign.

The Alcardo Andrews Foundation runs a number of programs including youth support and assistance for parents affected by gang violence. “Guns are way out of control. Rape and femicide … it’s just out of control,” says Avril Andrews, founder of the Foundation. Andrews says that violence in the community is “traumatising” and police aren’t doing enough.

Andrews says their hope is that the march raises more awareness and encourages victims and affected families to speak out. She says that the youth in Hanover Park have become desensitised to violence. “This needs to change,” she says.

Resident Martina Martin says violence in Hanover Park is an “epidemic”. She says she joined the march because she wants to see change in the community. Growing up, Martin says she was also a victim to physical abuse and later her romantic partner abused her too.

Martin says that somehow, the community, government and police need to “speak one language” and that proper support is needed for victims. She says that they should do more than just raise their voices. 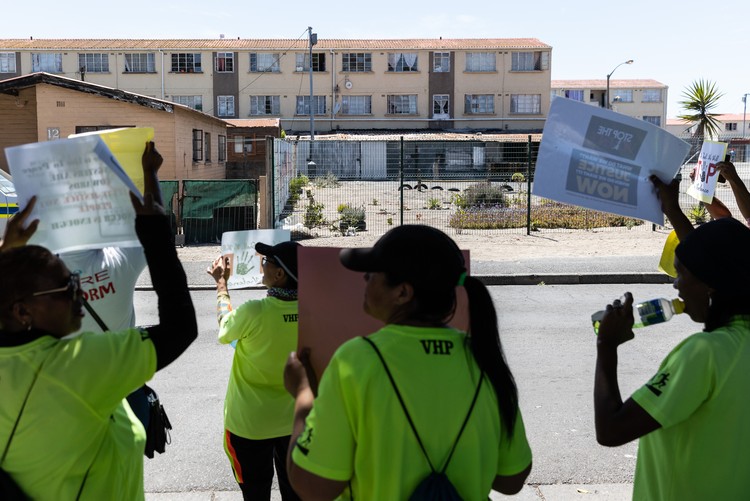 Protesters gather outside Galway Court. Gang violence recently flared up at this block of flats, causing tensions to erupt in the community.

Next:  Freedom Road – an empty promise

Previous:  Commuters say they are paying up to three times more because Metrorail is broken