Cape Town Community Housing Company hits back: “If you bought something, you own it and you are responsible for it” 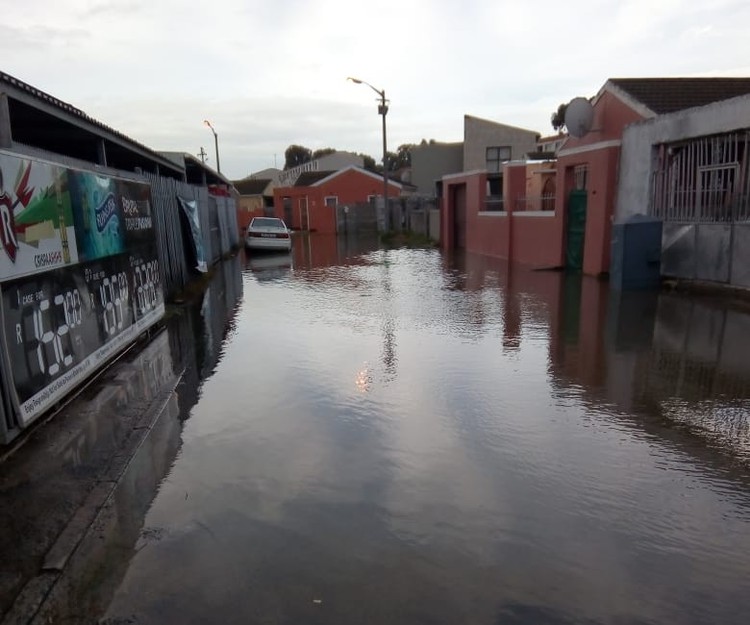 Two weeks ago, this road in Luyoloville, Gugulethu was completely flooded. Photo supplied

Every year during winter residents of Luyoloville in Gugulethu, Cape Town, say their homes become flooded. This, residents say, is just one of several consequences of shoddy workmanship by the Cape Town Community Housing Company (CTCHC).

But CTCHC disputes the allegations, saying that it is the responsibility of home owners to maintain their properties.

“This happens every year. The water fills up my whole yard. That water is a combination of sewage and drain water so it stinks … Even the flooring [inside] gets loose and it has to be replaced,” says Maria Booi, secretary of the Luyoloville Housing Committee.

Homeowners say their trouble with the company dates back 20 years, to the inception of the low-cost housing project.

Earlier this month, we were contacted by members of the Luyoloville Housing Committee who were at their wits end with trying to get the company to resolve serious infrastructure failings.

Booi has lived in Luyoloville since 2000. She says that the water pipes in her home are too small, leading to “ongoing issues with sewage”. She currently lives with her two children and says there were times her 17-year-old son “couldn’t even go to school because he couldn’t get out because of all the water that was in front of the gate”.

Booi says that when you flush the toilet in the bathroom, water comes out in the kitchen. “The pipes are not big enough for the water to pass through properly.”

Chairperson of the committee Nomvuyo Louw said that the materials used to build the houses have been flawed since they moved to the area in 2000.

“The bricks that they used to build these houses with are problematic because when it rains, the water penetrates them. The window frames we have are too heavy for the walls. They also did not seal it properly. So whenever it rains, the water gets in between the window and the wall.”

Resident Phumla Nontshakaza says the drains in the area are frequently blocked, which worsens the flooding when it rains.

“We’re going through a difficult time because when it rains, water floods our houses and the streets. We cannot come out of our house. In the street, the drains are not cleaned, so there’s just water everywhere.”

She says that there are also too many people on one plot which adds to the sewage problem. “Based on the plan that was drawn up for these houses, there was supposed to be one house on one plot. But instead, they built four houses on one plot.”

The Luyoloville committee say they have previously held forums and discussions with CTCHC in an attempt to address their complaints to no avail.

“We sat down with CTCHC to tell them to fix these issues, but they don’t fix the issues. They only patch up the parts that are broken. What did they do with my money? We’ve been complaining about this nonsense for years,” says Louw.

The committee says there is also a lack of clarity about whether its the responsibility of the municipality or CTCHC.

“Whenever we have a problem, we go to the City council and they send us to CTCHC. They keep sending us back and forth. So we don’t even know who we should go to when we have a problem. No one wants to take responsibility.”

David Masimila, general manager of operations at CTCHC, disputes the claims made by the residents. “[We] don’t know why people are expecting this from us when we sold the property to them. If you bought something, you own it and you are responsible for it. You cannot keep the seller responsible for something that you own,” he says.

Masimila says the company installed storm water pipes in the area in about 2009 after “there were a lot of complaints about the site being filled with water”. A report was also prepared for the National Home Builders Registration Council (NHBRC) in 2012, indicating that the work was done and what it cost.

He says the company has not received any formal complaints from the residents since the storm water pipes were installed.

“In the last two years, [we] have had three meetings with the Luyoloville Housing committee at our offices. In not one of those meetings did they mention [flooding].”

CTCHC also commissioned the National Home Builders Registration Council to investigate the houses in 2006 after residents had complained about the standard of their homes prior to 2004.

“In most cases, small hairline cracks were found, which is standard with any house. We then received money from the government to fix the problems that the NHBRC found with the houses, which we did. NHBRC then issued a certificate stating that all the houses had been rectified according to their standards.”

We returned to the City following Masimila’s comment. The City is yet to respond.