Western Cape given 33,900 doses of the Pfizer vaccine to kick start phase 2 this week 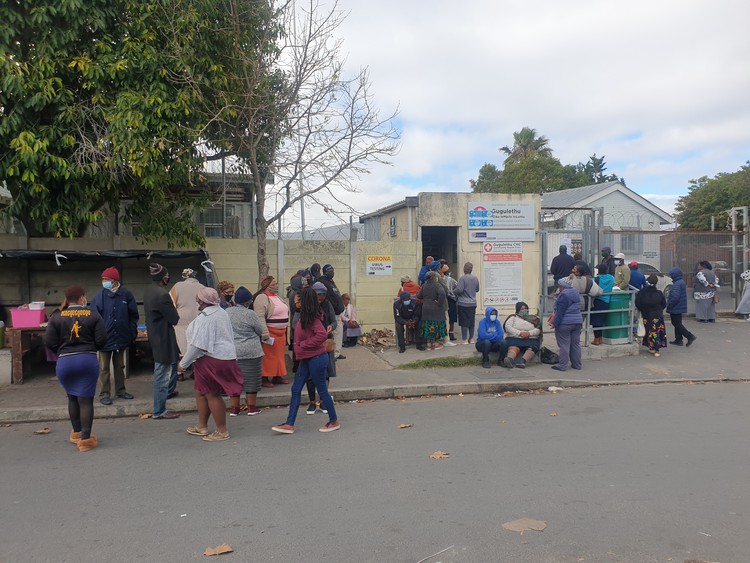 People outside the Gugulethu Clinic on Wednesday morning. The rollout for phase 2 of the Covid-19 vaccine started at the clinic on Tuesday. Photo: Mary-Anne Gontsana

Pensioner Rhoda Desai and her husband Anver Desai from Rondebosch East in Cape Town say they were excited when they got their SMS instructing them to report to the Gugulethu Clinic for their Covid-19 vaccine on Tuesday.

Desai, 60, has leukemia and her husband, 61, has diabetes and a heart condition. She said they did not hesitate when they were told to report to the clinic between 10 am and 2pm.

She said that when they arrived at 9am, there was already a long queue at the gate without signage to designate a line for people coming to the clinic and those specifically there for the vaccine.

Desai said that after having stood in line for the better half of the morning, they were eventually told that the clinic had run out of the 23 vaccines they had for the day. The couple went home and, after complaining about their experience to an official, they were eventually vaccinated later the same day at Lansdowne Clinic.

“It is very important to us that we get vaccinated against Covid-19,” she said. Desai questioned whether people told to return to the clinic the next day would then receive the vaccines allocated to people who received SMSes to come that day.

When GroundUp visited Gugulethu Clinic on Wednesday morning, there were three separate lines outside the gate. There were about 20 elderly people in the vaccine line. They were there to get help making a booking for their vaccination, or to get the vaccine after receiving the SMS.

Asked about Desai’s experience, Western Cape Premier Alan Winde said the vaccination site at Gugulethu Clinic only opened on Tuesday with a limited number of people over 60 who were invited “to test the system”.

Winde said no long queues had been reported by the team at the clinic.

“We ask for the public’s support as we embark on this mass vaccination campaign while we identify and address teething issues,” he said.

Winde urged people, where reasonable, only to go to the vaccination site once they have received their SMS indicating the date, site and time. “This will enhance our scheduling process and also avoid a situation with queues,” said Winde.

The City of Cape Town’s Mayoral Committee Member for Community Services and Health, Zahid Badroodien, said in a statement on Tuesday that the Western Cape had received about 33,900 doses of the Pfizer vaccine from the national government to kick start phase 2.

“We are starting small, to iron out any teething problems that may come from what I’m sure we all agree is a mammoth undertaking. Communication on this vaccination drive is key, not only to ensure that people know where and when to go for their vaccines, but also to address vaccine hesitancy, and to reach communities where internet and data access are very real challenges,” he said.