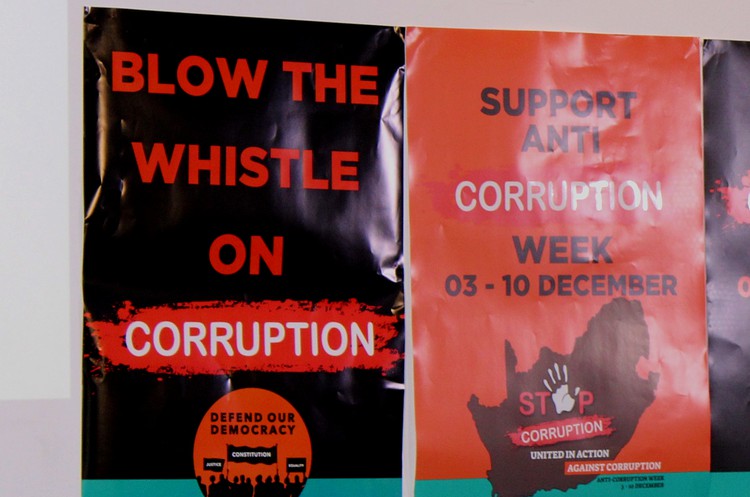 Corruption Watch has released a report on whistleblowing, calling for better support and resources to aid whistleblowers and fight corruption. Photo: Masego Mafata

Better protection and support must be given to whistleblowers reporting misconduct or corruption, says Corruption Watch in a report on how whistleblowing is perceived in South Africa.

For two months, Corruption Watch conducted an online survey of attitudes and behaviours related to whistleblowing. The results of the survey, which garnered 2,010 responses, were released in a report on Thursday to mark International Anti-Corruption Day.

The report is part of the Defend Our Democracy’s anti-corruption campaign which started on 3 December and ends on Friday.

According to the report, participants believe that whistleblowing is important to curb corruption and crime in South Africa. Just over half of participants noted that if they had to experience corruption, crime or any form of misconduct, in the public or private sector, they would know where to report it.

Participants also called for the government to strengthen legislation; establish a whistleblowing institution or agency to provide legal, financial and mental health support; and dedicate additional resources to law enforcement agencies to ensure that complaints are investigated thoroughly in order to hold perpetrators accountable.

“The data from this survey, along with the whistleblower complaints received by Corruption Watch and other organisations, and the experiences reported on in the public domain, clearly indicate that more needs to be done to make the environment safe and conducive for whistleblowing, if we hope to build a corruption-free society,” said Corruption Watch’s Kavisha Pillay.

Whistleblowers are protected by the Protected Disclosures Act. The Act “provides procedures in terms of which any employee may disclose information relating to an offence or a malpractice in the workplace by his or her employer or fellow employees; and protection for an employee, who has made a disclosure in accordance with the procedures provided for by the Act”.

Whistleblower Athol Williams testified before the Zondo Commission and released a statement last month explaining that he had been forced to flee South Africa because of concerns for his safety. Williams told GroundUp that the Act offers no protection for “public-interest whistleblowers” like himself.

“If you’re outside the company or are a public-interest whistleblower, you are fully exposed with no material support of any kind from government or the private sector,” he told GroundUp. “I did not blow the whistle on one employee harming another or the company harming a customer, but blew the whistle on my employer harming our society. There is no legal protection and financial and legal support at all,” he said.

Williams said the lack of support for whistleblowers raises questions around the “sincerity in our fight against corruption”. “I have tenuous legal status where I am. I could be thrown out with no home and no income. I am separated from my family. I am on my own with deteriorating health. I did this for my country and in return I am now left here to rot,” he said.

Among the recommendations in the report is for the Act to be reviewed and amended to expand the definition of a whistleblower from just employees to “anyone who has disclosed information about wrongdoing or misconduct”.

Other recommendations made in the report included that the government allocate money from the Criminal Assets Recovery Account Fund to financially support whistleblowers. Corruption Watch also suggested criminal sanctions for individuals or institutions found guilty of intimidating or harassing whistleblowers, and more public awareness and education about whistleblowing.

Next:  Deadline looms for families facing eviction from police safehouses