“Where are we going to go? Back to the community where police are treated like dogs?” 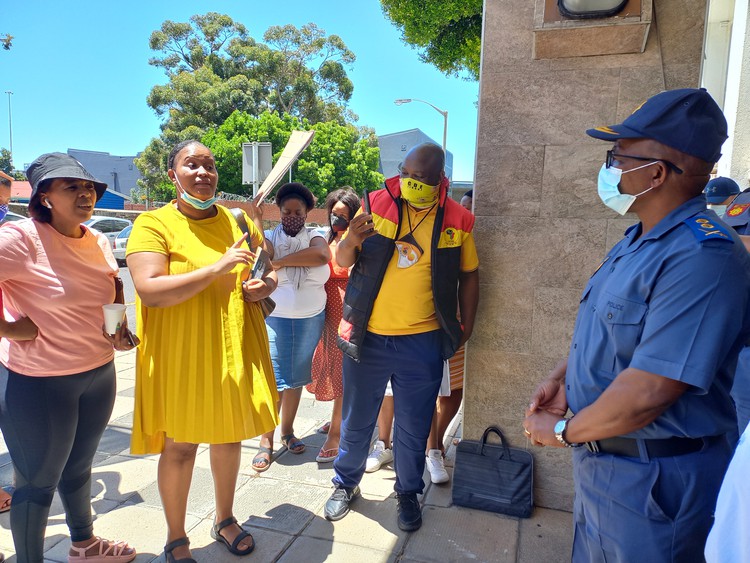 Yolisa Ntshangase (left) and Uyanda Maqwazima (centre) joined the protest outside the provincial SAPS head office in Green Point on Thursday. About 50 families living in police safehouses and barracks face being evicted by 31 December 2021 due to rental increases. Photo: Marecia Damons

At least 50 families living in South African Police Service (SAPS) barracks and safehouses in Cape Town could be evicted by new year’s eve.

On Thursday, some of the households protested outside the SAPS office in Green Point against what they say are unaffordable rental increases. Some tenants are currently paying between R900 and R1,500 per month. Under the new fees, they will have to pay about R11,000 from 1 January 2022.

According to a joint statement by Ndifuna Ukwazi (NU) and the South African Police and Allied Workers Union (SAPAWU), the rental increases follow recommendations to obtain market-related rentals from the national Department of Public Works and Infrastructure. The department owns the properties which are situated in well-located areas in and around the inner city.

SAPS members and their families have been requested to vacate official housing sites by 31 December or pay very large rental increases, the statement said. Those who cannot afford to pay have to either find alternative housing or face homelessness.

“This exorbitant rental increase will be detrimental to the livelihood of SAPS members in lower-income brackets, especially when the official housing is meant for lower ranks [lower than the rank of Lieutenant Colonel],” the statement read.

“We need [SAPS] to look at each member’s circumstances. Are these members no longer under threat and is the threat gone at their homes? If yes, then this eviction process should be done fairly. If no, then why must they be evicted?” he asked.

Zanele Qunta and her husband moved to a police safehouse in 2017 after he was shot in their Delft home in front of her and their children the previous year. Her husband is a police sergeant.

Qunta said their housing contract states that they can live at the safehouse for three years, after which they can reapply should they wish to continue living there. She said they reapplied in 2020 and received no feedback from SAPS or the department until they were given notices to vacate.

She said her biggest concern is that her family will be shot and killed if they return to Delft next year. “The 31st is in 12 days. Where are we going to go? Back to the community where police are treated like dogs and where we are living in fear? We know that we don’t own those barracks, but we should be given enough time to stand on our own two feet to buy our own house in a safer and better place for our families,” said Quntu.

Police spokesperson Colonel Andrè Traut said that since the families’ grievances fall under the SAPS Housing Policy, the matter will be dealt with internally. “Our members are acquainted with the policy, and grievances in this regard will only be facilitated if the correct channels are followed,” said Traut.

The Department of Public Works and Infrastructure has yet to respond to our questions.