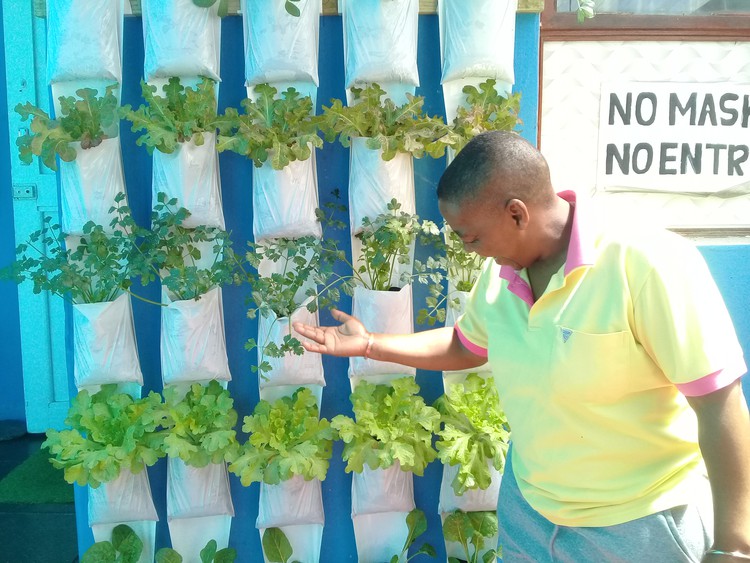 Tafelsig CAN initiative organiser and Mitchells Plain resident Joanie Fredericks shows off their vertical garden. She believes their garden project is a good way to tackle hunger in the community. Photo: Marecia Damons

Organisers of the Tafelsig Community Action Network (CAN) in Mitchells Plain, Cape Town say the government is offering no support to address the issue of hunger in vulnerable communities during lockdown.

The Tafelsig CAN initiative was started by Joanie Fredericks and Bernie Morrison before the national lockdown was imposed in March. They began serving meals in Tafelsig where they found scores of families without food.

Fredericks said that although applications for government funding had been made available, the requirements were exclusionary.

In order to be eligible to apply for funding from the Solidarity Fund, the initiative would have to provide an NPO Certificate, proof of registration as a Public Benefit Organisation from SARS, six months of recent bank statements, a copy of its founding document, and the details of its board members. These documents are often not readily available to civic groups who started assisting communities at the start of lockdown, says Fredericks.

“The requirements are so strict that it’s going to be impossible for most of the feeding schemes and stations to apply. It’s a slap in the face to those who’ve literally been taking care of the people when the government failed them,” she said.

She said during earlier stages of lockdown “nobody cared how we got the money or the food”. “They didn’t even speak with us. So it is an atrocity that they are suddenly putting the red tape up again. If there’s one document not there, they cannot help you.”

Most of the food and other donated goods are stored at Morrison’s house in Tafelsig. The CAN also feeds families in Eastridge and Philippi, with a total of 21 feeding stations that each serve more than 300 people daily.

At most stations, breakfast is served at 9am and is either oats or mielie meal, depending on donations received.

The CAN gets ready-made peanut butter and jam sandwiches from Ladles of Love, which are served at lunchtime. Dinner is served at 4:00pm.

Ladles of Love has been assisting Tafelsig CAN since April. “They make weekly collections of vegetables, maize meal, rice, samp, salt and onions depending on how many people they feed and how much we are able to give them,” said Ladles of Love founder Danny Diliberto.

Tafelsig CAN also relies on donations from individuals. Nadeemah Jones, who cooks the meals in Tafelsig, said meals include staple foods like soya, samp and beans, curry, fish and rice.

Professor Jeremy Seekings, Director of the Centre for Social Science Research at the University of Cape Town, said that despite the efforts of civil society and other community groups to feed people during lockdown, the gap left by the government was too vast for volunteers to fill.

“The government failed to distribute food under the lockdown but also failed to plan. Neither before nor after lockdown did the government come up with a coherent plan for ensuring that poor families could access food,” he said.

Meanwhile, Tafelsig CAN, together with Organic Earth solutions, has launched a food garden box project called: ‘One Household, One Garden’.

“The idea is that it should feed a family and household. Everything in the box goes towards that garden so that no one can say they’re hungry or doesn’t have food to eat,” said Julian Pillay of Organic Solutions. The garden boxes include seeds, organic plant boosters, organic fertilisers, measuring cups, botanical insecticides and fungicides. The seeds in the garden box include radish, squash, beetroot, wild rocket, swiss chard, carrot, green beans, turnips, garden peas, and sweet corn. Fredericks said the aim is to provide each household in Tafelsig with a garden box, but the project is costly.

“One vertical garden costs around R2,000 and a garden in a box is around R750. We are grateful for all the donations and support that we receive, but at some point, it will dry up completely.”

Fredericks hopes that the feeding and gardening initiatives will restore dignity to the community.

Previous:  The woman who tried to stop the rot at the Lottery