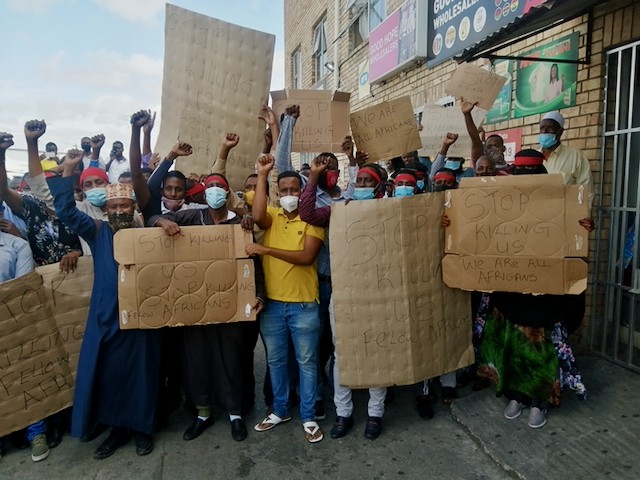 About 200 immigrant spaza shop owners shut their doors on the weekend in Nelson Mandela Bay and protested. Four Somali shop owners have been shot and killed in the past week, in KwaNobuhle, New Brighton and KwaZakhele. Another was shot but survived.

According to Said Mohamed, chairperson of the Somali Association, Hussein Ibrahim was killed on Monday in Mavavana Street in KwaZakhele and the perpetrators sped off with his bakkie full of stock. Abdi Hakin Jelle and Mikail Pito were both killed on Friday in Vuku Street in New Brighton. Abdunasir Abukar was shot and killed in KwaNobuhle in Uitenhage on Friday.

Police spokesperson Priscilla Naidu confirmed the killings. “Two people were shot dead in their shop in Vuku Street in New Brighton on Friday. It is alleged that at about 7:30pm, the two victims aged between 23 and 25 years old were inside the shop when two suspects entered and shot both of them. One victim passed away at the scene while the other passed away on the way to hospital. Groceries, cigarettes and cash were taken.”

In another incident on Friday, a 38-year-old shop owner was fatally shot and his assistant wounded when they were robbed at about 11:30am in Khama Street, KwaNobuhle.

Naidu said, “It is alleged that the shop owner was busy offloading stock for his shop when three armed men approached him. The suspects ordered the owner to open his shop. A fight broke out between the owner and the suspects which resulted in his fatal killing. On hearing the shots, his assistant rushed out and was also shot. He was admitted to a local hospital. Cash and groceries were taken. The bakkie was recovered not far from the scene.”

On Saturday the protesting shopkeepers marched down Durban and Standford roads in Korsten, Port Elizabeth. They forcefully shut two shops they found open in Durban Road.

Mohamed said: “We are killed and robbed every day because we are not prepared to pay the protection fee.

“The police fail to protect us and communities are also exploiting us. If we ask for protection from the communities where we do our businesses, the community leaders also expect us to pay them.”

“We have ordered over 600 of our shops to shut down in the townships because we cannot live like hunted animals.”

Mohamed said vehicles are constantly robbed when returning from wholesalers and shops are victims of extortion rackets.

“The thugs easily block our roads and rob our stock worth thousands of rands when we cross over the speed humps. Ten of our vehicles have not been recovered and no suspects have been arrested,” he said

“These thugs demand between R1,000 and R2,000 a month per shop. They are well known, but police are not doing anything about them,” Mohamed said.

“We want minister Bheki Cele to intervene because the police have failed us,” said Abdrisek Adan. “We are doing everything legally. But the police are more concerned about raiding our shops than protecting us.”

“We are not here to take anyone’s job. Ours is to do business and create jobs for the needy. We have been assisting the poor families with burials and food parcels. But now we are killed like animals. We demand the same protection from police because we are also Africans,” he said.

Next:  Covid-19 grant is not enough, say activists

Previous:  Why some scientists think the AstraZeneca vaccine is still useful for South Africa