“As long as the municipality does not provide us with electricity, the illegal connections will continue” 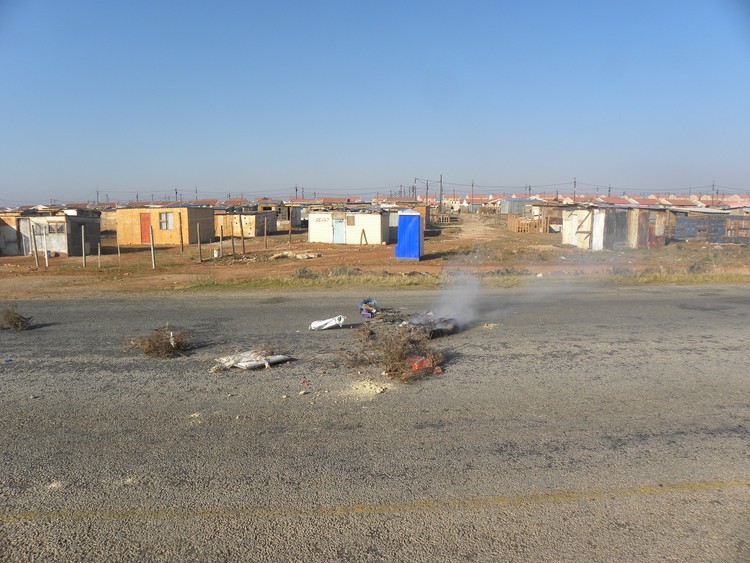 Homeowners and residents of Endlovini informal settlement in NU29, Motherwell, are at loggerheads over illegal electricity connections.

Tension between the groups erupted in a protest on Tuesday, with burning tyres and branches to block the R334 also known as Uitenhage Road.

A protester, who did not want her name published, said her electricity connection was abruptly cut off by homeowners on Sunday. Her shack was getting electricity illegally from a roadside electricity pole.

“They never gave us notice. They just cut our electric cables accusing us of causing electricity outages in the area. Now I am desperate. I will have to throw away my meat and other food,” she said.

Another protester who only identified himself as Mongezi said, “As long as the municipality does not provide us with electricity, the illegal connections will continue. There is going to be bad fighting between informal settlement dwellers and homeowners because we can’t live in darkness.”

Groundup spoke to residents who live near Endlovini. They said their appliances and laptops had been damaged because of problems with the electricity supply.

“Shack dwellers leave webs of uncovered cables running on the ground. That is very dangerous. We cannot wait for a person to be electrocuted for us to act. They should fight their battles with the municipality without including us,” said one of the residents.

Nelson Mandela Bay Municipality spokesperson Mamela Ndamase said, “We are aware of clashes caused by illegal electricity connections across the city. We continue to have a challenge of illegal connections. It poses a challenge to residents living in formal houses as their appliances get damaged but more concerning are the deaths that are caused by this crime.

“In the past financial year, we spent more than R15 million on the electrification of shacks. This financial year, the City has budgeted R37.7 million for informal housing electrification to deal with the problem. However, it is difficult to say when exactly we will deal with this specific area as the demand is very high across the city,” he said.