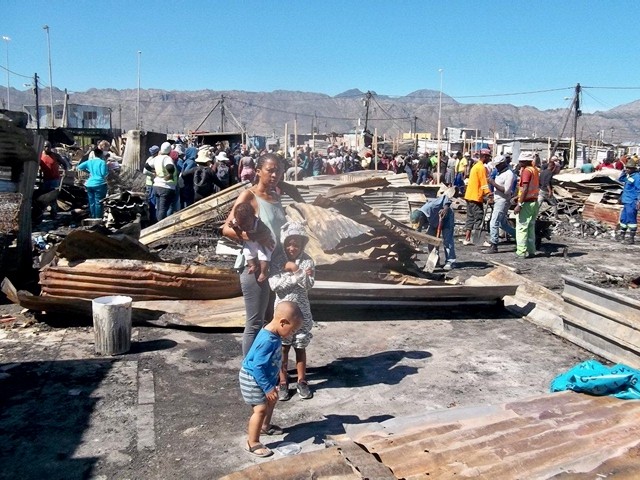 A fast-moving shack fire in Solly’s Town, Nomzamo, Strand, has left about 200 families homeless. The fire occurred at around 8pm on Wednesday.

“The fire moved so fast that the residents could not pull their belongings out,” said community leader Melane Maqokolo.

He said, “Water always comes out of our standpipes slowly and in small amounts, so we battled to get water fast enough to put out the fire.”

There are seven standpipes for 500 families.

Asanda Dingaan said the wind made the fire so strong they could not hope to fight it. “The wind blew from all directions … Firefighters doused some sections, but the fire erupted again,” he said.

In the aftermath, shack dwellers with wheelbarrows and spades were removing rubble while some tried to rebuild.

Maqokolo said, “We use our bare hands to clear away the rubble. Our feet ache because we step on burnt building nails, but we have no choice as we have to fix the area.”

He said people didn’t sleep a wink last night as they watched over their exposed belongings and their plots.

Maqokolo said they want the City of Cape Town to help them rebuild. He said they also need the Department of Home Affairs to help with temporary IDs for those who lost their documents, because SASSA demands that fire victims produce IDs before people can receive assistance. People need food and clothing.

Nothando Nyangoza said the fire is a result of not having electrification. The fire started in her neighbour’s unoccupied shack where people who had not yet received electricity boxes were connecting to an electricity box. It exploded.

“I want the government to give us houses,” she said.

Bongeka Nokraya lost some of her belongings in the fire. She said she previously lost everything in a fire in January 2020.

“We are here to provide urgent humanitarian assistance for the next five to seven days,” he said.

Sablay said water, hot meals, blankets, mattresses and baby care packs would be provided. “We will consider donating school clothing because mothers can’t afford to buy them,” he said.

Jermaine Carelse, spokesperson for the City of Cape Town Fire Service, said 40 firefighters and 11 firefighting appliances were on the scene. The fire crew eventually extinguished the blaze just before 1am on Thursday morning. No fatalities were reported, but one person sustained injuries and was taken to hospital.

Next:  Workers protest in Gauteng, demand health department give them jobs