Barrydale held its annual giant puppet parade and performance on Sunday. Music, dance, dress-up and puppets brought the town to life as it celebrated the tenth year of this event. Titled “The Final Spring”, the show focused on climate change.

The event is a collaboration between Net Vir Pret, an organisation that works with deprived youth in the Overberg area, the Centre for Humanities Research at the University of the Western Cape (UWC) and the award-winning Ukwanda Puppet & Designs Art Collective. 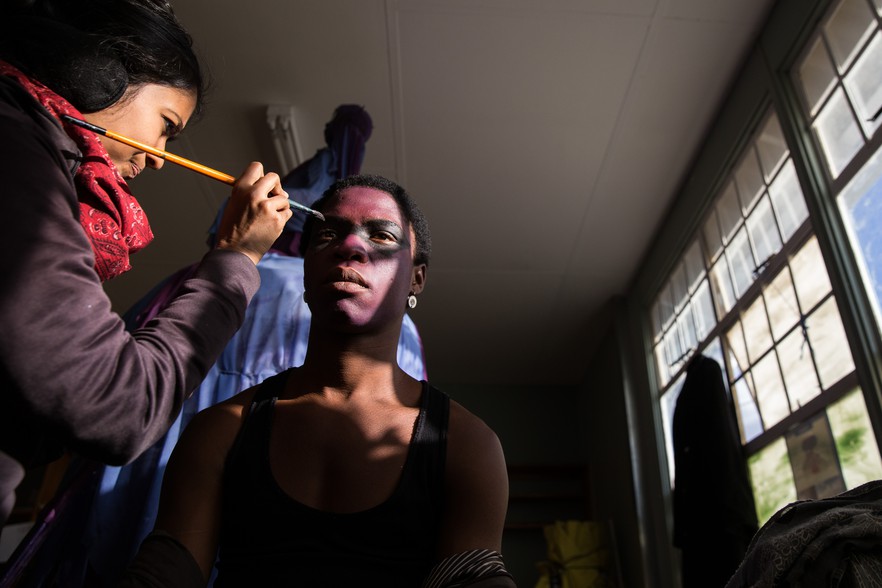 23-year old Emma Lee Koppies gets her make-up done. This was Koppies’s first time performing. She said that she felt “really excited”. 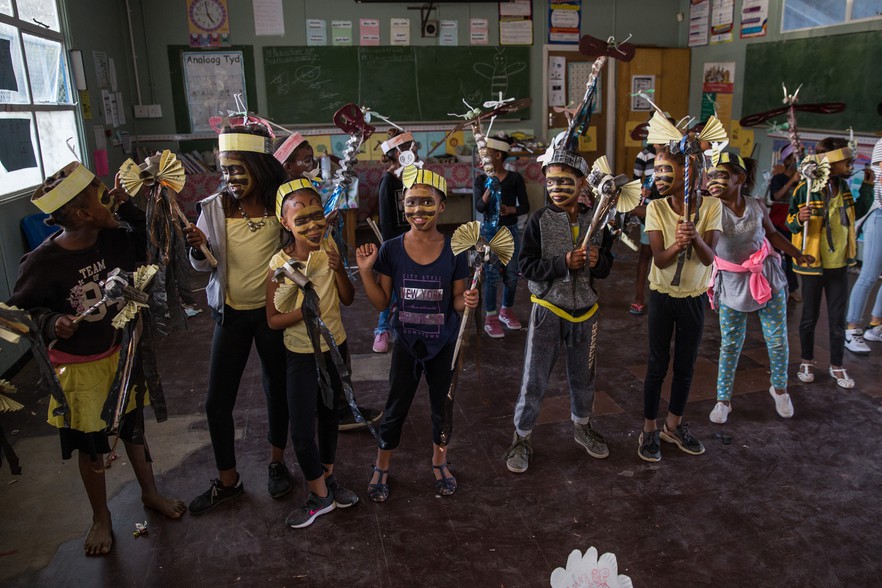 Over 200 people, most of whom are children from the Net Vir Pret program, participated in the show. But there are also volunteers, make-up artists, musicians, stage builders and puppeteers. 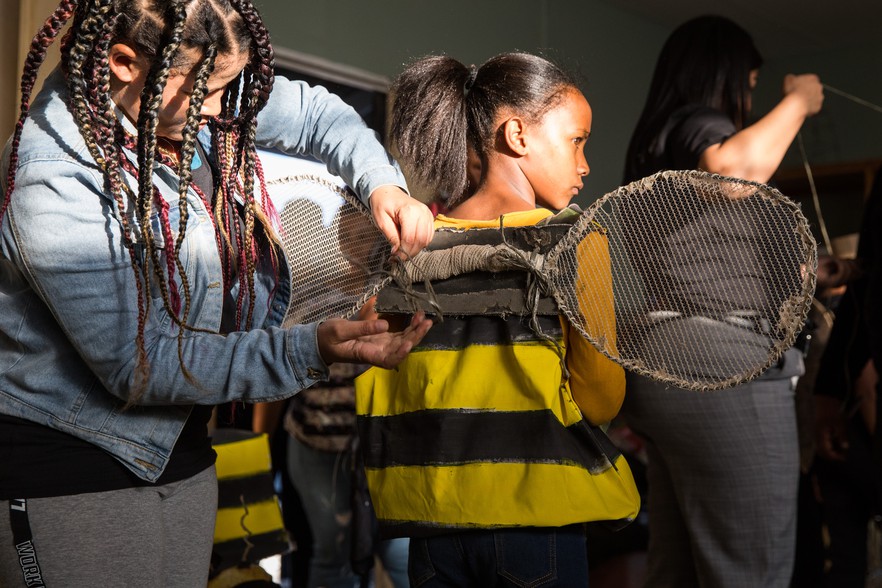 Children as young as five participated in the show. Performers dressed up as drones, grasshoppers, bees, flowers, ants and toktokkies (a type of beetle). 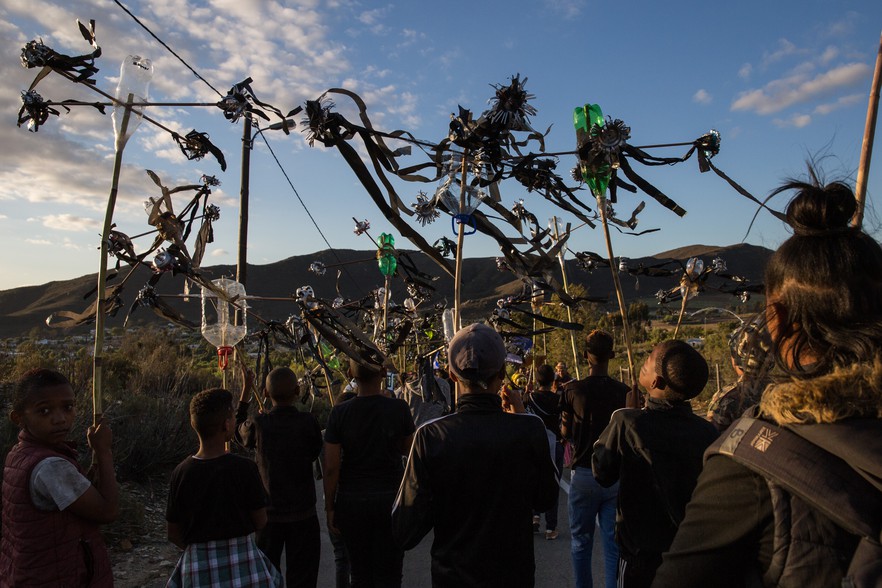 Before the performance, a parade was held through the streets. 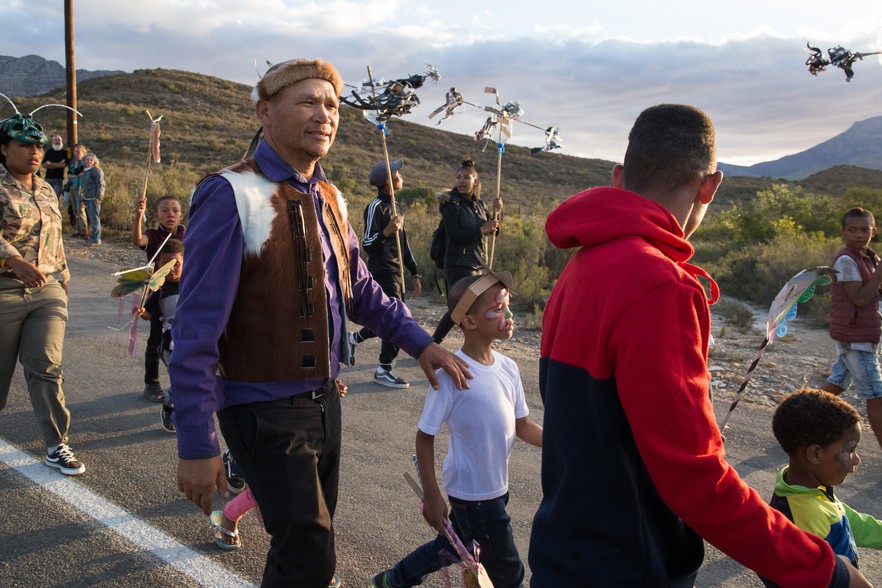 Peter Takelo (pictured above), Director of Net Vir Pret said that he was feeling “incredibly excited because they are talking about things that are relevant” such as global warming. “As a small community, we also try to do our bit.” The conceptualising of this year’s event started in January. Takelo said that the concept of the “The Final Spring” and climate change were chosen for their current relevance. Takelo said that growing up he used to find honey in caves, but now there are fewer bees. 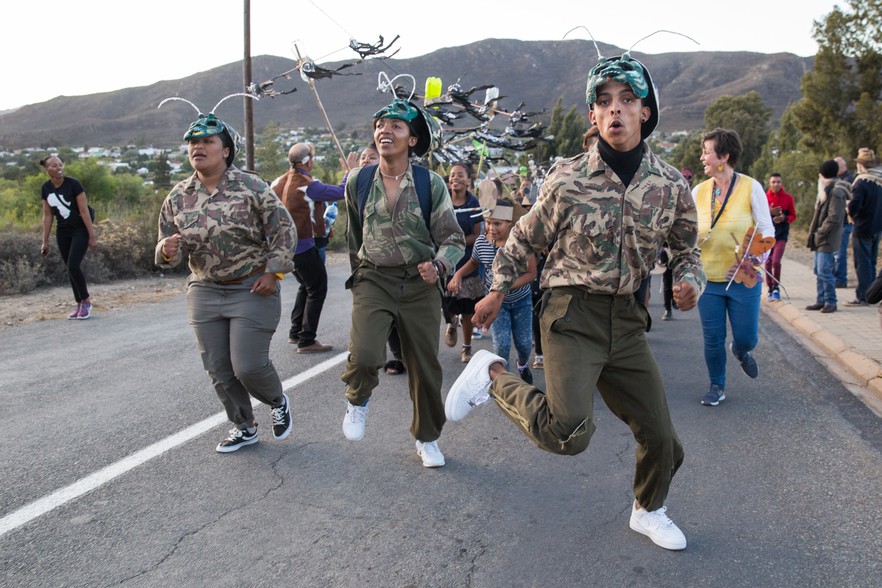 Takelo is also a musician who helped write most of the music for the performance. One of the songs he wrote goes “Where, where are insects? I really want to know.” He said that farmers aren’t concerned enough about the impact of spraying on the ecology of the area. “If the insects die out, what is left?” he asked. 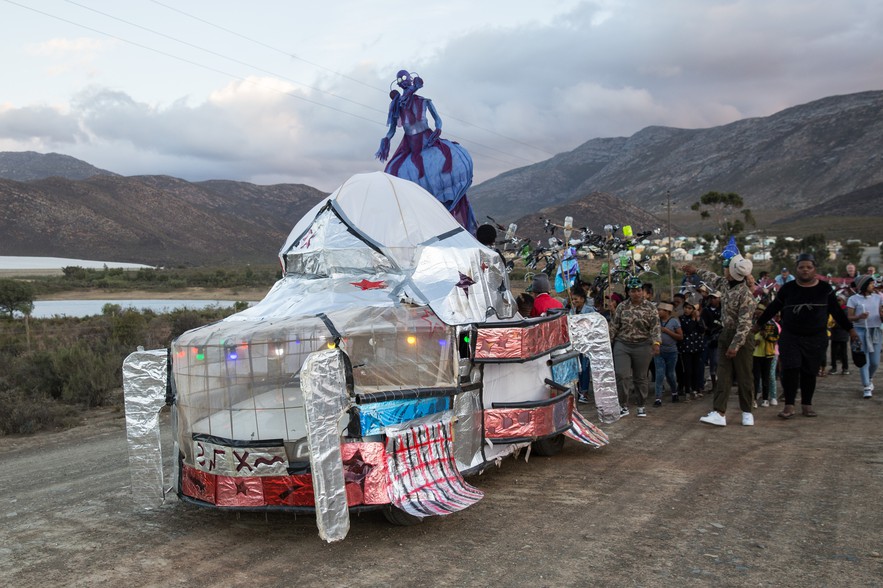 The first parade started in 2009 and started only as a parade. 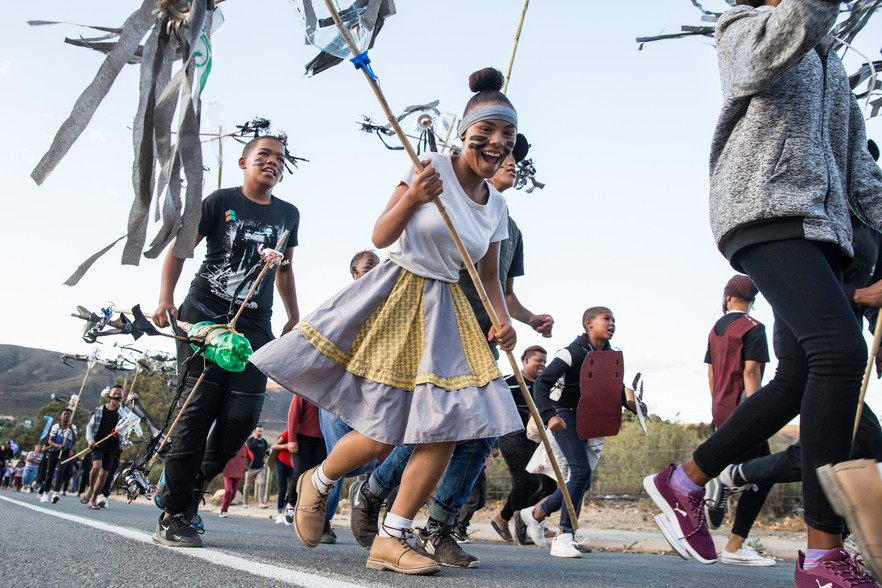 Takelo said that the children being able to perform is an incredible feat for the children in the Net Vir Pret program. “They perform like professionals,” and this creates opportunities for young people to blossom, he said. 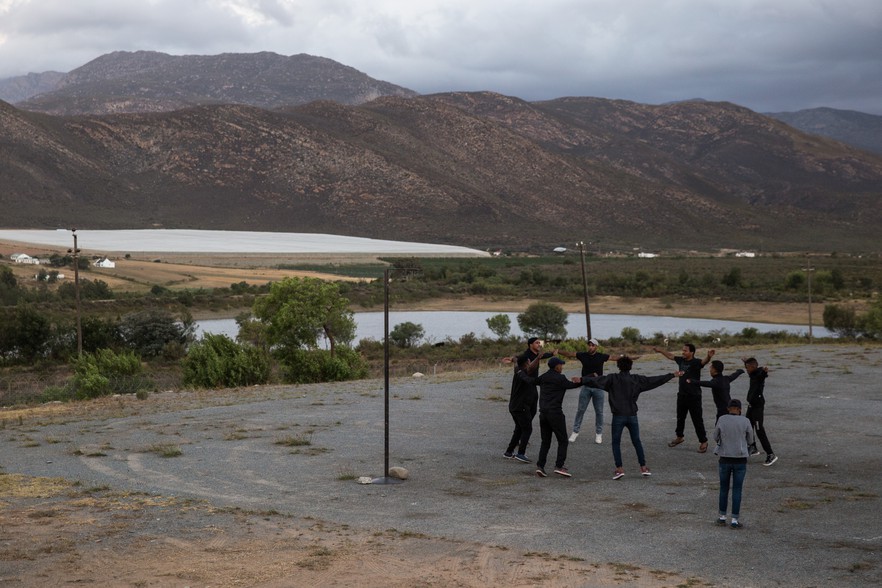 Performers warm up against the backdrop of the mountains. 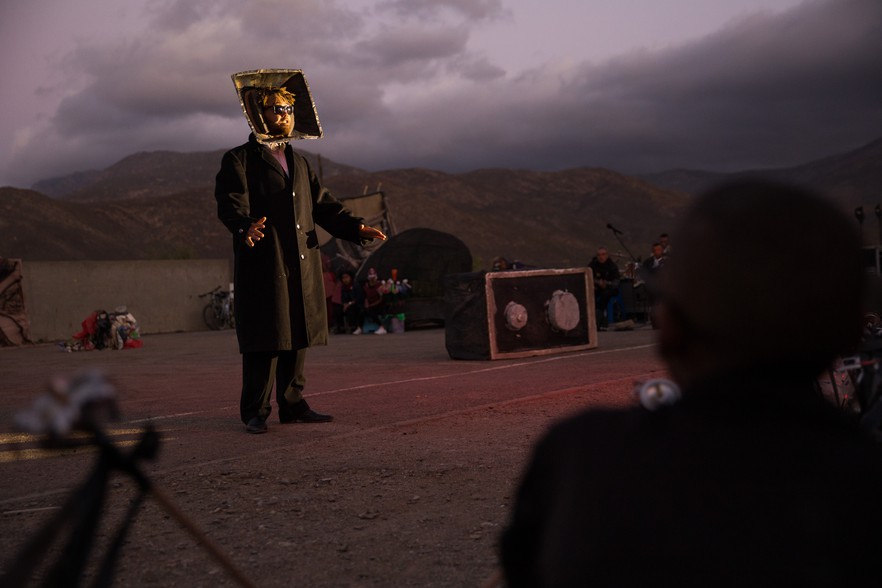 Titled The Final Spring the futuristic climate change themed play starts in the year 2119 when all of humanity has been wiped out or has left planet earth. 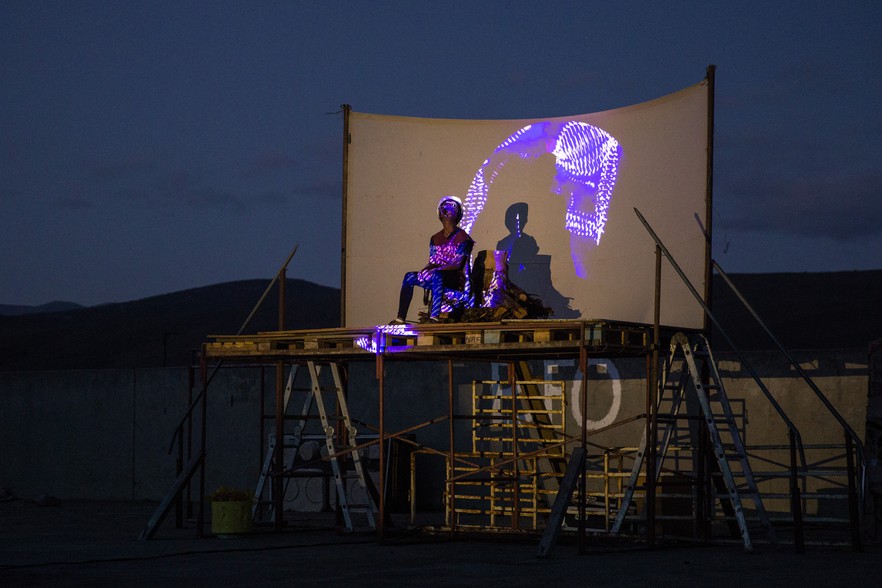 We were then taken through a musical journey with insects trying their utmost to survive the clutches of a mysterious alien and a giant robot built to terminate any “pests” with poisonous pesticides. 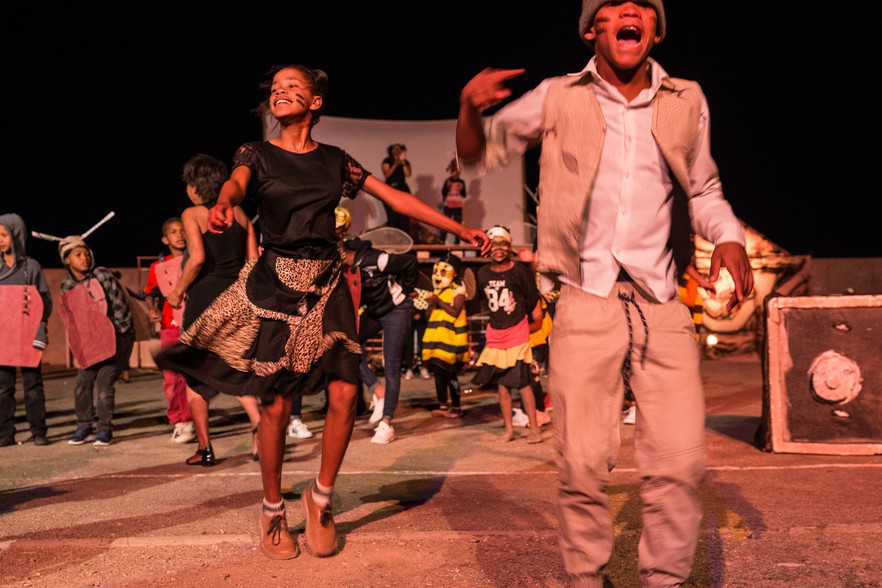 The show ended with the performers breaking into dance and song.

Next:  City to use bylaws to remove refugees

Great Photo Essay, well done Ashraf.
I hope this reached the people of Barrydale, the children would be so proud to see it. Thank you for sharing!