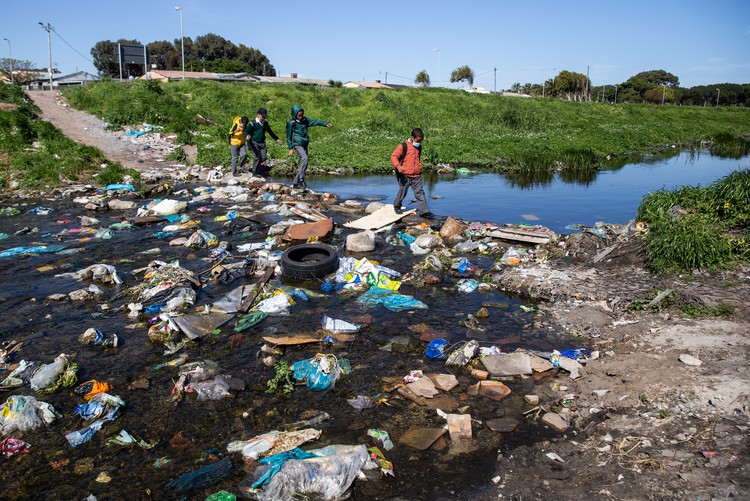 Learners cross the Vygieskraal River to and from school using this makeshift walkway built by residents. In winter the river swells and it is hazardous to cross. Photo: Ashraf Hendricks

Residents of Statice Heights, a low cost housing settlement in Kewtown located between two rivers on the Cape Flats, say they have been waiting for fifteen years for a footbridge to safely cross the Vygieskraal River.

Community activist and resident Amina Rajap told GroundUp that the bridge was commissioned back in 2006 when Suzette Little was their councillor. Little confirmed this telephonically.

But nothing has happened.

“Time and again the issue of the footbridge has been put on the City’s agenda for sub council meetings but years later there is still no bridge,” said Rajap.

She said residents had resorted to building a makeshift walkway with tyres and rubble.

Rajap said it is mostly school children who need to cross the river. Cyprus Primary School and Peakview High School are located across the river in Bridgetown.

When GroundUp visited Vygieskraal River, just after 2pm on a Tuesday afternoon, learners were returning from Cyprus Primary. With their arms outstretched like plane wings to keep their balance, they carefully picked their way across the jumbled walkway.

Emmylou Newman, a parent and Statice Heights resident, was waiting for her 11-year-old son, Mishaisle Newman.

“I have two sons that go to Cyprus. My other one is six years old. I accompany them every morning and I wait for them every afternoon because I have to make sure that they cross that river safely.”

“They have fallen in that river many times because it is slippery, but luckily none of them have been injured,” she said.

Newman said that during winter, children had to take off their school shoes and socks when they cross the river to avoid getting their footwear wet.

Mishaisle said, “I am used to it now. I’m not scared. But I would really like it if there was a bridge here.”

Parent Fadiel Leech also accompanies her three children, aged six, seven and 11, every day to and from school.

“It is a real struggle for the children,” he said. “There was a time when my seven-year-old slipped and fell into the water, she was completely soaked. We had to go back home for a change of clothes.”

“It’s been years that we’ve been waiting for this bridge. We really need it,” said Leech.

Ward 49 Councillor Rashid Adams (DA) said the bridge was needed as the river became swollen in winter and it became even more dangerous than usual for children to cross it.

Adams said, “The application for a bridge was a motion made by Suzette Little, but after her term, the new council had no bridge on the agenda.”

“We brought it back on the agenda in late 2017. Things kept going back and forth but everything has been tabled on the sub-council meeting and we are getting regular report backs. At this point we are waiting for an appointment date for the contractor [to build the bridge],” said Adams.

“My term as councillor ends in November, but I am confident that the bridge will be built shortly.”

“We agree this infrastructure is much needed,” said Mayco Member for Transport Rob Quintas, but he could not provide a timeline for its construction.

Previous:  Video: How do we know vaccines work?