“I was treated as a nuisance and not a human being” 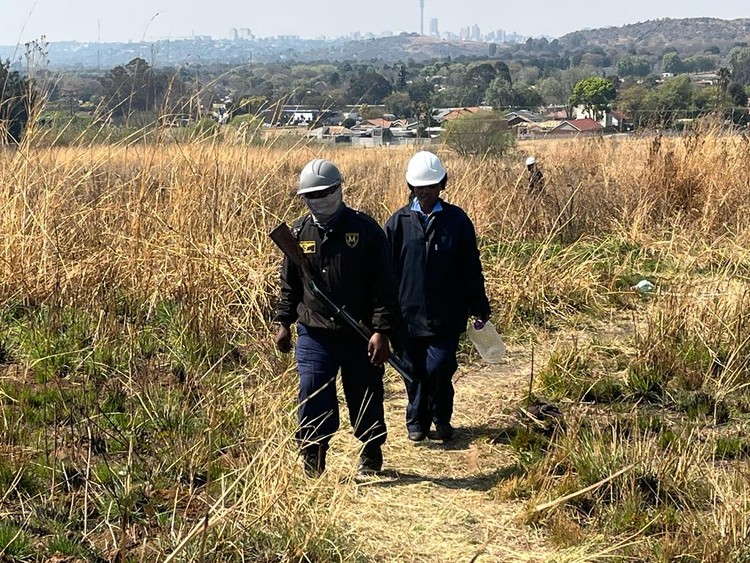 Johannesburg City officials and members of the Johannesburg Metropolitan police were accompanied by armed private security guards when people living in the Alberts Farm Conservancy were evicted on 30 August in defiance of a court interdict. Photo from the court application.

A group of “park dwellers”, who have been evicted twice without a court order, once in direct contravention of an interdict, are now seeking constitutional “damages” of R5,000 each from the City of Johannesburg for its unlawful conduct.

The matter was set down in the Johannesburg High Court on Thursday.

The City, the Johannesburg Metropolitan Police Department (JMPD), the Minister of Police and the Gauteng police commissioner have said they are opposing the application.

However, the City, which consented to both interdicts, has yet to file its papers.

The 28 applicants in the matter reside in the Alberts Farm Conservancy (AFC) in Randburg, one of the city’s biggest green “lungs”. They say they have a “reasonable” relationship with local residents and tourists, because they help keep the area clean.

One is a popular car guard at the weekly park run. Others are self-employed as waste recyclers and doing odd jobs, earning between R1,000 and R3,000 a month. (Read about this community.)

Some have been living in the conservancy for 15 years. They say they have nowhere else to go, and they need to be close to the municipal dump in order to sort through waste for recycling.

Thamsanqa Tomodi, who deposed to the affidavit in the court action, said in August last year, representatives of the City, the JMPD and private security arrived unannounced, without a court order, and proceeded to demolish their homes and erect fences and gates around the conservancy.

They launched urgent proceedings in the High Court, securing an interdict and an order that the City return their possessions, including building materials. If the City was unable to comply, it was to provide them with building materials, blankets, bedding and mattresses.

The City was also ordered to give them 24-hour access to the conservancy.

An interdict, stopping any further harassment, dispossession or eviction, was made final, by consent, in November 2021.

Tomodi, in his affidavit, said, “Our possessions were never returned to us. But shortly after that, representatives of the City dropped off second-hand clothing and bedding as well as some tents. This was not an actual fulfilment of the order, but we were powerless to challenge them.”

Last month, a year later, the occupiers were forced to return to court to secure another urgent order, after another “raid” on the morning of 30 August by the City, JMPD, SAPS and another private security company.

Tomodi said some of the “enforcers” were armed with shotguns.

He “cautiously” advised the officials about the previous court order, but he was told they were doing a “park clean up” and he should take some clothing and leave.

“Without my consent and before my eyes, my belongings were thrown into the back of a truck, together with the belongings of others,” he said.

Their homes were torn down.

He said when he asked to see a notice of eviction, he was “admonished” and told that he was “trying to be a lawyer”.

“I was treated poorly, I was physically pushed, grabbed by my clothing and had a shotgun pointed at me.

“I was treated as a nuisance and not a human being.”

Others lost everything. They were not given an opportunity to get clothes, shoes or the toys they’d bought for their children.

One said a member of the “enforcement group” had pressed the barrel of a shotgun against his back and then, when he turned around, cocked and primed it, as it was against his chest.

Tomodi said they were left without shelter, in winter, with nothing.

In supporting affidavits, the applicants confirmed what had been taken from them, including money, clothing, bedding, tents (which were given by the City when they last demolished their homes), cell phones, ID books, tools and as one said “my dignity”.

Two, who have cancer, said their medication was taken.

The second interdict was granted, again with the City’s consent, on 2 September.

The respondents were given until 15 September to explain why they violated the previous interdict, why the court should not declare that they had acted contrary to the Constitution and the Prevention of Illegal Eviction from and Unlawful Occupation of Land Act, and why they should not pay the occupants R5,000 each.

The order also directed the immediate return of the occupants’ possessions.

However, Tomodi said that the next day only one JMPD truck arrived as opposed to three, which were used to take their possessions.

“We were displeased with the condition of the returned goods.

“We voted not to accept the returned goods, because they were damaged, missing, mixed up and incomplete,” he said.

In an opposing affidavit, SAPS Senior Legal Administration Officer Desre Grobler said at the request of the City, five police officers had been present “merely to observe and monitor the operation”.

“Upon conclusion, SAPS, having been satisfied that it managed to ensure that public order was maintained and that the citizens in and around the park were secured, left,” she said.

In reply, Tomodi said on this version, which was denied, the police had “stood idly by” while their property was “stolen” and they were harassed, assaulted, manhandled and had firearms pointed at them.

He said they were, at the very least, complicit in that they took a decision not to act to protect them.

Next:  Protesters camp outside Soweto police station after a surge in gun deaths