For the first time in weeks Angeline Louw and her six children say their sense of dignity was restored when they “had a proper wash” on Monday night.

“Today, my kids and I had a proper wash with privacy for the first time since we were evicted from the farm. I didn’t sleep for the whole time we stayed outside, but [Monday] night I slept nicely,” she said.

Louw was among 263 residents who were evicted from Klein Akker farm in Kraaifontein on 19 August.

Earlier this month, the Western Cape High Court upheld the court order to evict the farm dwellers, rendering them homeless. The City of Cape Town had offered to house the families at its emergency housing site known as Kampies, in Philippi (about 30km away). All of the families, with the exception of one person, rejected this offer.

Deputy Minister of Rural Development Mncebici Skwatsa then intervened and the families relocated to an abandoned state farm in Bottelary Road about five kilometres away.

On Tuesday, the Louws and other families began rebuilding their lives on a state-owned property called Mesco near Stellenbosch. The group wants a fence to be built around the property. They say basic services like water, toilets and electricity are also needed. They currently collect water from a nearby standpipe.

Louw said that having a roof over their heads was a relief. On the City’s offer to move to Kampies, Louw said, “We know crime happens frequently in Kampies, so we can’t hand ourselves over to dangerous criminals.”

Mildred Croy was cooking food on a wood fire outside her new farmhouse. “I got the food from residents who visited us … Once our issues get sorted, we will have our own spaces and enjoy privacy,” she said. 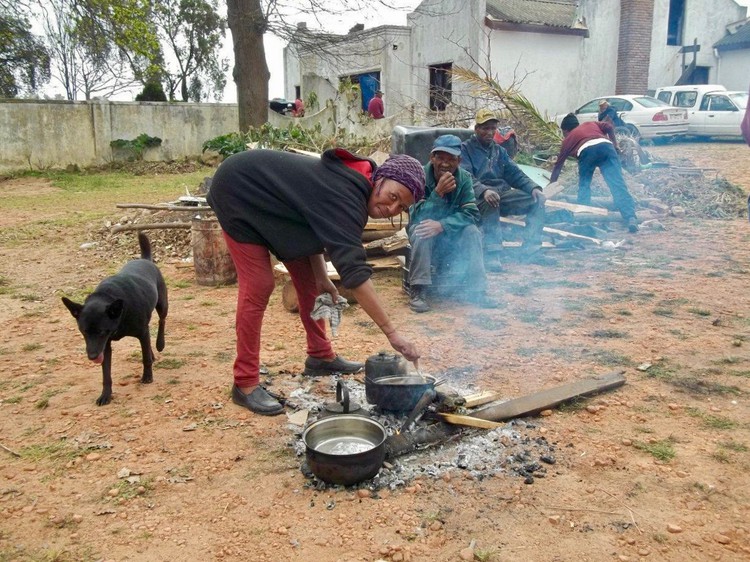 Mildred Croy cooks a meal for her family on a wood fire outside of their new farmhouse in Stellenbosch on Tuesday. Photo: Vincent Lali

Community leader Tanya Bowers said that the 22 evicted families were busy cleaning up a dilapidated building on the farm. Most of the structures have no windows and doors. “They are closing up windows with plastic sheets. The houses are covered in dust,” she said. But, said Bowers, despite the poor condition of the buildings, it was “better than squatting beside the road and experiencing harsh conditions outside”.

While sitting outside her new home, Anna-Marie Schoeman said, “I can’t be more thankful to Minister Skwatsha. I will vote for the ANC next time.”

Another resident, Rachel Swanepoel, said the move to the farm meant her boyfriend could return to work as he no longer needed to stay home to watch over their belongings which were at the roadside.

Swanepoel said she and other farm dwellers were waiting for the government to give them water. “We could not do laundry while we stayed outside, so our clothes are dirty. We need water to wash them,” she said.

Skwatsha’s spokesperson Phuti Mabelebele said the deputy minister was “shocked to witness the inhumane conditions” of the families living along the roadside. He then made Mesco available to accommodate the families “until their problem had been permanently solved.”

Spokesperson for Ubuntu Rural Womxn and Youth Movement Wendy Pekeur said: “There is a lot of work to be done on the land, but the farm holds endless opportunities to make life decent there.” 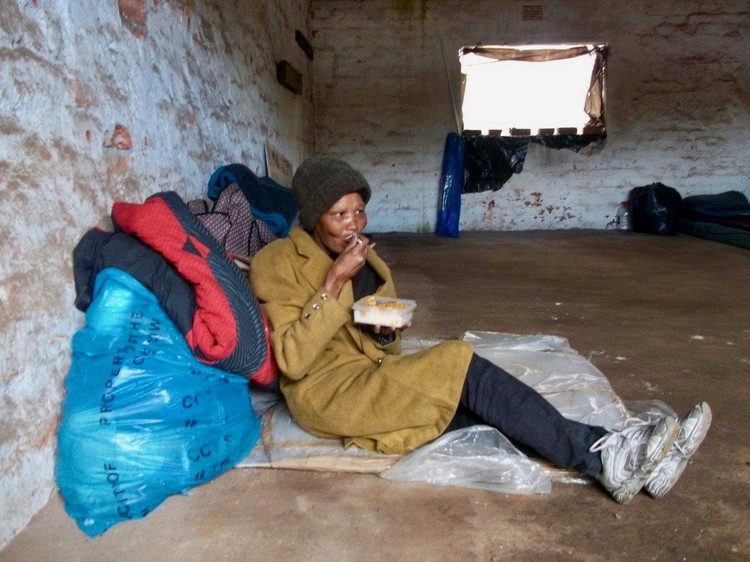 Rachel Swanepoel enjoys a meal inside a building on the abandoned state farm where the Klein Akker families have been relocated. She says her boyfriend works on a farm nearby. Photo: Vincent Lali

Next:  Hundreds protest in Booysens Park to be moved to “safer areas”