“Even the rats don’t feel safe in this school”

Learners and teachers at Arcadia Secondary School in Port Elizabeth say they fear for their lives as gang fights erupt around them. The school, which has 940 learners, is crumbling from vandalism and neglect.

School principal Gregory Prince said Arcadia was built in 1975 as a temporary structure during apartheid forced removals in South End, Fairview and Welldene.

“This a broken community and our learners come from broken families,” he said. Gang fights overflowed from the community into the school.

He said, “In girls’ toilets you find gang graphics written on the walls by girls. We even catch learners selling dagga to other learners and others carrying knives.”

He said the matric pass rate had dropped from 93% in 2003 to under 40% in 2016. “The increase in drugs in the area has affected our school performance and behaviour of our pupils. But study camps and awareness campaigns have helped us to improve. Last year, our matric pass rate was 63%,” Prince said.

In 2017 “gangs started to shoot one another in front of the school gate. Luckily no one was injured. We had a situation where a pupil was handed a gun through the school fence but we quickly spotted that and called the police.”

In another incident, he said, a grade 11 pupil had dropped out of school after apparently being threatened by a gang when he failed to shoot another gang member.

Prince said the school needed a brick wall or a better fence. The present fence was often vandalised. The school had deteriorated to such an extent that it was not fixable, he said. The bottom part of the walls was rotten; window panes and doors are broken.

In September 2017 the Department of Education and the Department of Public Works assessed the building. “They said it was not fixable and recommended that a new school building should be built. Since then we never heard from them.”

“Then in May this year, Premier Oscar Mabuyane was invited by the Community Police Forum to come and see our school conditions. He promised to speed up the building process. But we also have not heard anything from him since then,” said Prince. 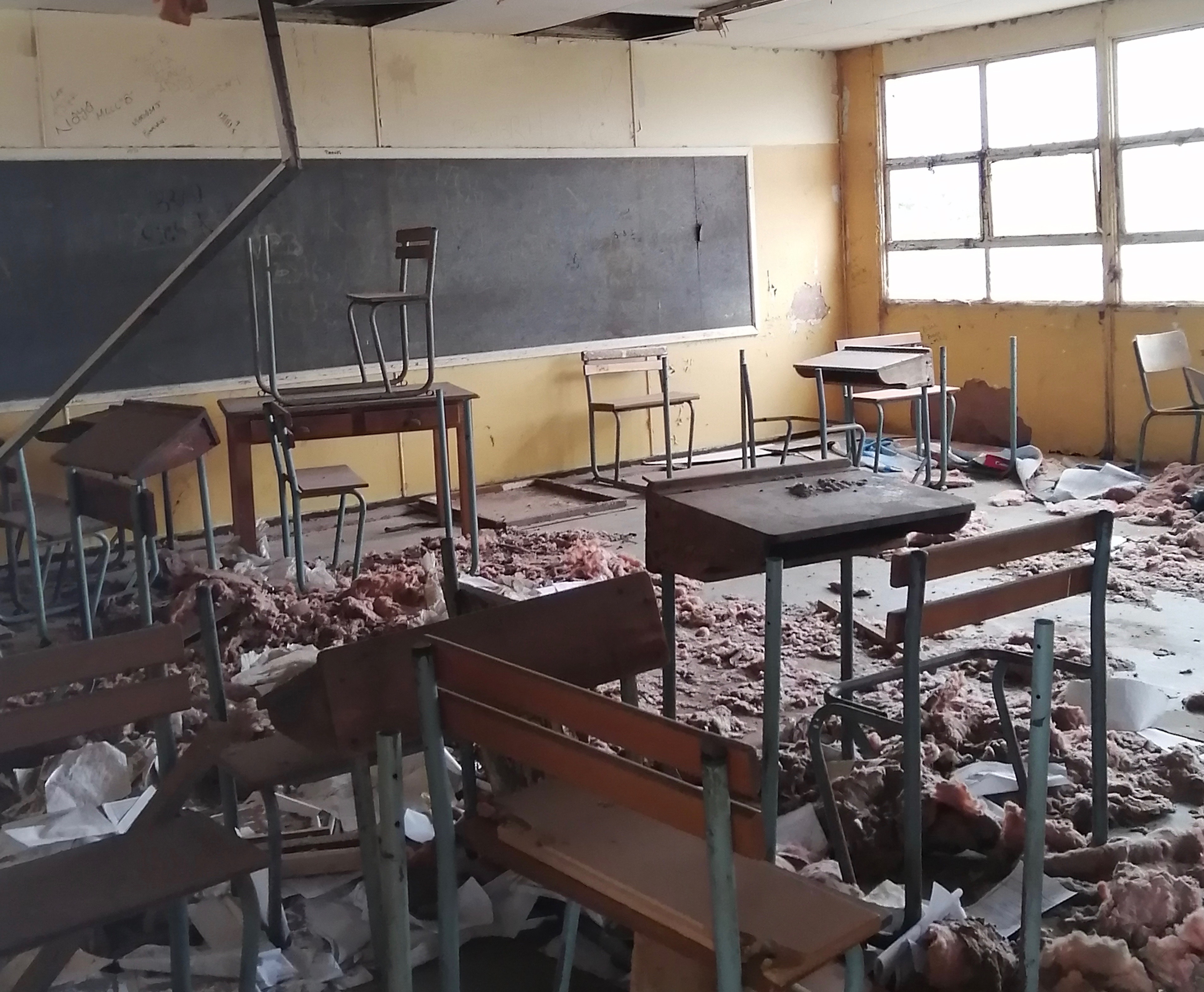 Many of the classrooms at the school cannot be used. Photo: Mkhuseli Sizani

Pastor Greg Coltman, safety and maintenance officer at the school, said six classrooms had been completely shut. Six others were still being used but had no electricity. Ceilings were broken and birds were nesting in the rafters.

“Boys enter through the fence and break into the classes to catch the doves. Then the ceilings fall down. Electric cables, plugs and the lights were ripped out. Furniture broken down and 11 of our CCTV cameras were stolen in 2017.

“All these cases were reported at Bethelsdorp Police Station but no one has been arrested and we never heard from the police. In total, we have about seven reported cases,” he said.

“According to statistics that we have collected, since January this year until 4 October, 80 people have been killed in the Bethelsdorp Police station precinct due to gang-related incidents.

“Arcadia is falling apart. Not even rats hide there anymore because they don’t feel safe,” Martin said.

Basil Booysen, recording officer of discipline at the school, said, “I have been at this school for 23 years. But gangs and drugs have changed our children.”

“To raise a boy child here is very difficult. Today, he is a daddy’s boy, tomorrow he is a gangster. They carry knives to school and even smoke dagga in classes,” said Booysen, who coaches rugby and cricket.

Mvusiwekhaya Sicwetsha, spokesperson for the Premier, said the Premier had meant that he would speak to the relevant MEC to speed up the building of the new school.

Provincial Education spokesperson Malibongwe Mtima said, “The Arcadia Secondary School is in a priority list of our district’s Medium Term lnfrastructure Expenditure budget for 2019-2021. So within this three year period, a new school will be built.”.

Police Colonel Priscilla Naidu confirmed the opening of two cases of malicious damage to property in April and October this year, but said the dockets had been closed “due to lack of information.”

Previous:  Clinic in Uitenhage shut down by protesters