Police are terrorising us, says shopowner

Immigrant shop owners in Diepsloot, Johannesburg, say they are being terrorised by police during a daily “crime stabilisation” operation ordered by police minister Bheki Cele.

The shop owners, who are mostly Ethiopian, say some police officers extort money and goods from them. Some shopowners have photographs of vehicles which they say were used by police who took their cash. Others have security footage showing police going through their things.

The shopowners say police search their shops for illegal firearms or goods, mostly at night, turning their shops and sleeping quarters upside down. Sometimes police come after shops have closed and demand to be let in. Police accuse them of selling fake, expired goods and carrying fake asylum documents, and demand cash to save the immigrants from arrest, say the shopowners.

Some shopowners say they have lost thousands of rands in South African manufactured cigarettes which they buy from local wholesalers. They say police officers also take cool drinks, airtime, tinned food and cash.

Police spokesperson for Diepsloot Tinyiko Mathebula said the operation, which started in February, was ordered by Police Minister Bheki Cele at the request of some Diepsloot community members. He said some raids are conducted in conjunction with the SA Revenue Service.

“Some members of the Diepsloot community forwarded a memorandum of demands to Minister Cele requesting that special police units be deployed to stabilise crime in the community. In response a crime stabilisation operation, which is a daily operation targeting all shops in Diepsloot, started about a month ago,” said Mathebula.

But, he said, shop owners should not be harassed, or have cash or legal goods extorted from them. He asked people to report wrongdoing by police.

“Affected people should come to the police and report. They can also call our crime stop number 0860010111 for anonymous tip offs.”

But most shop owners whose asylum documents are not up to date due to irregularities at Home Affairs say they are afraid to report.

The operation comes after xenophobic attacks erupted in Diepsloot in January, following the death of a police officer who is alleged to have been killed by an immigrant.

“This is operation robbery. As if the xenophobic violence was not enough, daily police harass us, they take our goods and money,” said Diepsloot community leader Desta Markos.

Resident Jackson Moagi says he has seen police accusing immigrants of carrying fake asylum papers. “Many people say they end up giving the police money even though they have legal documents,” he said. “Many shops have been raided at night with police taking goods and money. We feel that police are abusing their power, to oppress immigrants.”

Last Wednesday around 6pm shopowner Abeta Lire was inside the shop when police arrived. “They said I should come out so they can do a search. When l refused and asked for a warrant they swore at me and cut the security door with a cutter. They pushed and swore at me.”

He said they did not give him a chance to go inside his sleeping quarters to fetch his asylum documents. They tied his hands with cables and took cash and airtime. He was put into a police van. He was released after he telephoned his brother who brought a R1,200 ransom.

Lire, who has bruises on his hands where he says police tied him up, said police had already come in February and taken goods and cash from the shop.

Lire’s landlord Bethwell Mbengwa said he witnessed the incident. “Police pushed him and dragged him inside the van. They are only after money and nothing else,” said Mbengwa. 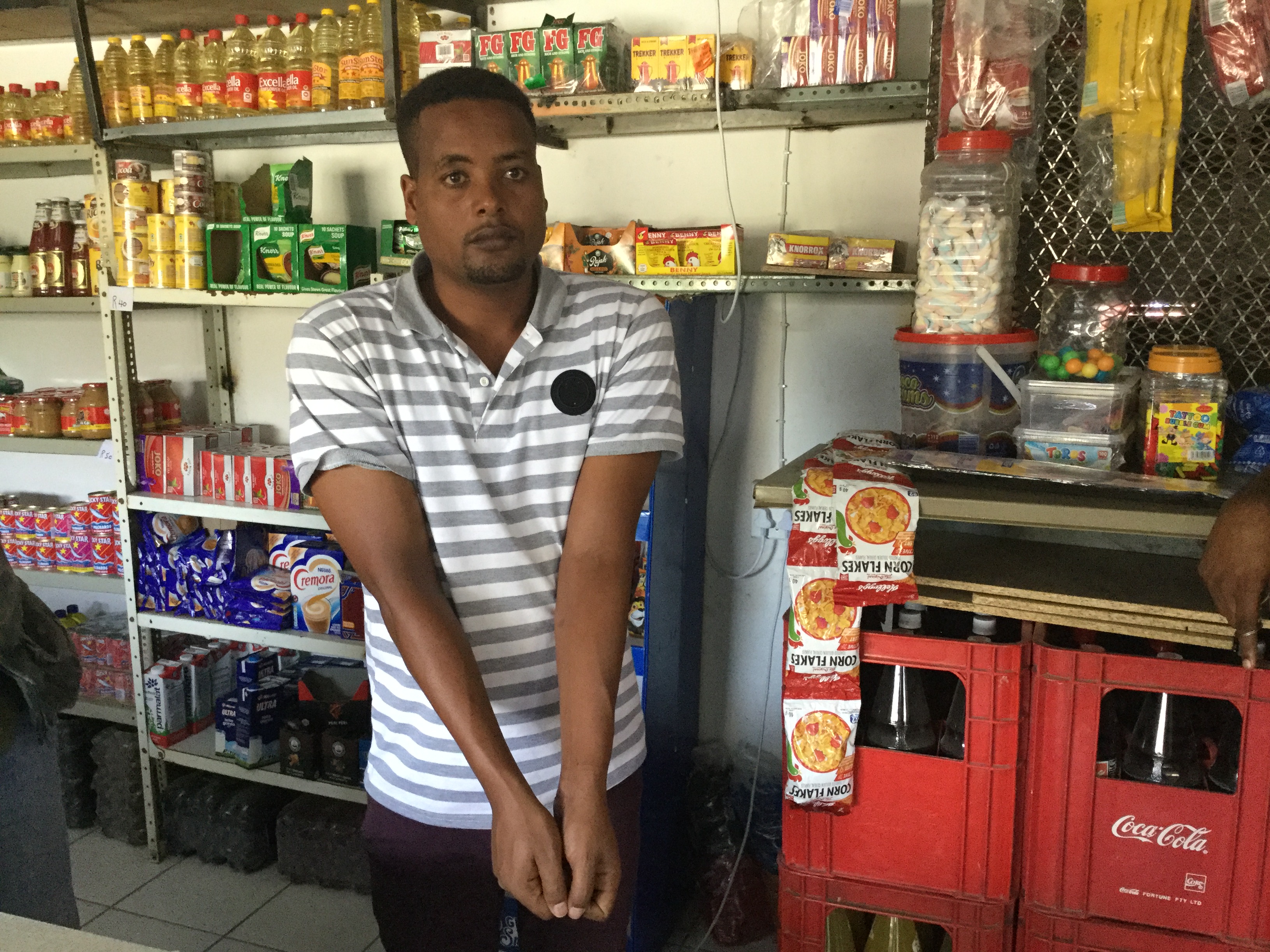 Abeta Lire says police tied his wrists with cables and took cash and airtime from his shop. Photo: Kimberly Mutandiro

Martin Esamber said he had closed his shop when police banged on the door at 9pm last Wednesday night. “They said I must give them money if l do not want them to come inside.”

“I gave them R500. They said it was too little and that l should give more. When I told them that I did not have it, they asked for a crate of cold drinks and drove away.”

Another Ethiopian national, Abbera Babo, said police had paid him a visit last Monday. He has security footage of police searching his things and taking cigarettes. GroundUp has seen the footage, which shows police going through shelves, taking cigarettes and leaving with the cigarettes.

“I have been going to Home Affairs and all l get is appointment letters. When l explained it to them, the police said they would arrest me if l did not give them money. l gave them R1,500.”

Babo said police also took cigarettes worth R30,000 from his shop in February.

Police visited Mulatu Nurmo’s shop earlier this month, taking cash and goods. He said when he tried to resist they slapped him. “Police just come to my shop and take what they want. I have lost cash and lots of money in stock.”

“The same police whom we are supposed to seek help from are attacking us,” he said.

Markos took GroundUp to several other shops where owners said they have lost goods and cash.

Dateso Abera has been trying to recover R40,000 worth of South African manufactured cigarettes which he said police took from him in February. He said officers broke the door to the shop, assaulted him and took the cigarettes, although he showed them an invoice from the wholesaler. One officer came to his shop recently and asked for money in return for the cigarettes, he said.

He and his brothers have been running the shop for seven years.

Brothers Solomon and Dester Abebiya said they had just closed their shop two weeks ago when police came around 10pm and banged on the door. When they opened they saw three police vans parked outside.

He said during the search the police officers demanded asylum papers.

“When I showed them my asylum document they said it’s fake, they threatened to arrest my brother who has lost his asylum document, and demanded money. I had to give them the money.”

Solomon said the officers went on to take all the cool drinks in the refrigerator, money in the cash box and cigarettes. They threatened to come back, he said.

“This is disappointing because our prime minister Abiy Ahmed was in South Africa having talks with President Ramaphosa,” said Markos. “They spoke of oneness and unity among African brothers, but now we are being terrorised. What happened to unity and living in harmony?”

Next:  Constitutional Court to rule on compensation for domestic workers

Previous:  One toilet for 659 learners at high school in Limpopo