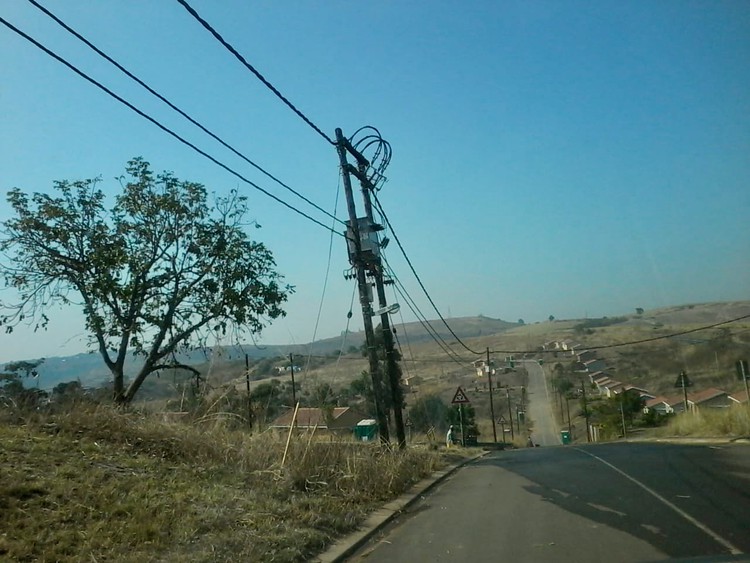 There are power lines in Verulam, north of Durban, but these were never connected to the 344 RDP homes handed over to residents of Oakford four years ago. Photo: Nokulunga Majola

Over 300 concrete foundations stand waiting in Oakford Valley in Verulam, north of Durban. Construction on the housing project started in 2014, but only 344 out of an intended 696 houses were completed and handed over to beneficiaries.

The completed houses are without toilets, water and electrification. The families are connected to illegal electricity, rely on Jojo tanks which the municipality fills, and use chemical toilets shared between two families.

One of the beneficiaries, Musawenkosi Mgobhozi, moved into his house in 2016. He says there are power lines in every street, but they were never connected to their houses.

“We had to buy our own material to connect electricity to our houses. We just don’t understand why electricity was not connected and yet we are told the houses are complete.

“Where have you ever heard that a complete RDP house doesn’t have an inside toilet? There is a bathroom with a sink and a shower but no toilet or water,” says Mgobhosi.

Ward 59 councillor Chris Langa says some beneficiaries received their keys in 2015 and others in 2016. He says it is puzzling how the handovers were done when there were still so many problems with the houses.

According to Langa, the second phase of the project was meant to start in January this year but this never happened. “We cannot afford to have empty slabs like this. People phone me every day demanding proper houses, yet there are slabs that have not been built on.”

EThekwini Municipality spokesperson Msawakhe Mayisela said the City allocated all 344 completed houses to the beneficiaries from the Oakford area.

“Beneficiaries had a responsibility to look after their houses and ensure that vandalism and invasions did not occur. The project has 696 houses, to date 344 units have been constructed. The remaining 352 houses will be constructed once procurement processes have been finalised.”

According to the City the delay in water supply was due to the construction of the pump station. “All the mains are in but not charged. The delay with electricity is caused by the shortage of electricity. Thirty-two tanks and chemical toilets were positioned in strategic points to be shared by residents,” said Mayisela.

Next:  Questions for a sex worker