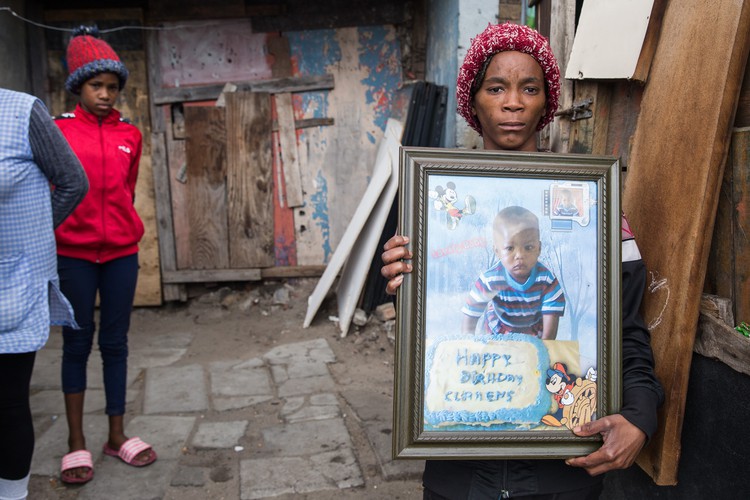 Tracy Solomons holds up a photo of her son Clarence outside their home in Elsies River. Eight-year-old Clarence was shot and killed by a stray bullet during a protest on Monday. Photo: Ashraf Hendricks

Eight-year-old Clarence Solomons lost his life during a protest over a house demolition, after being hit by a stray bullet.

The Elsies River woman whose house was demolished by the City of Cape Town’s law enforcement says she now has to share her mother’s small flat with six other people. She wants the City to rebuild her structure.

Tiffany Turner’s house, which was built on the side of one of the block of flats in The Range, said she had been living in it for 14 years and does not understand why it was demolished suddenly.

Pointing to her torn down concrete slabs, Turner said: “On Sunday, a law enforcement officer came to my house and told me that I should go and see councillor Mr Esau by the housing office with regards to my structure.” 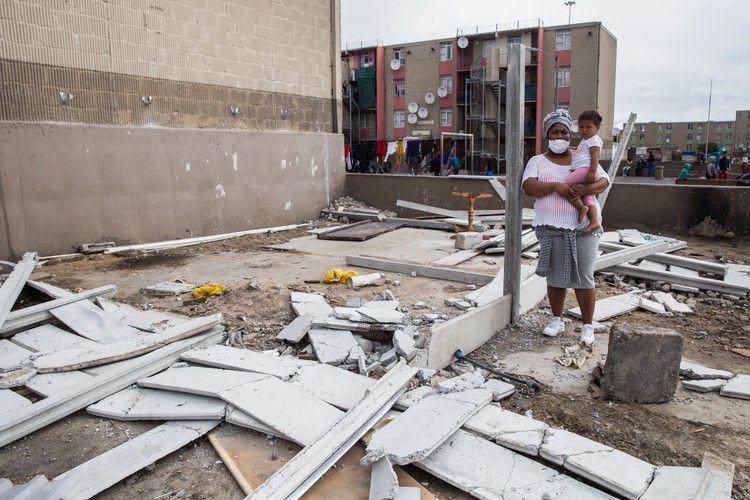 “He did not say what or why. He just said I should go there on Monday. Then he left. I went to the housing office as told around 11am. While I was waiting to be attended to there, I received a Whatsapp message from my sister’s child. It was a video showing law enforcement tearing down my house.”

She then “ran” to her house, about 30 minutes away. “When I got there my house was on the ground.”

“I had been living in that structure for 14 years. We put the slabs around the structure for safety purposes because there is a lot of shooting here and we have a little baby,” said Turner.

Turner said because of the demolition, the community stood with her and retaliated against law enforcement. “We threw stones and they retaliated by shooting at us. Things got out of control and because of my torn down house, a child is dead today.”

It was during this protest that Clarence was killed after being hit by a stray bullet in the chest. His visibly distraught mother, Tracy Solomons, could not speak to GroundUp, but her aunt said: “We received information that Clarence had been shot. We went to check and we found him lying in the street dead. Tracy is not coping. That is all we can say right now.”

Also hit by a stray bullet, on the buttocks, was 12 year old Tania Beukes. Elsies River community activist Imraahn Mukaddam said she had been discharged from hospital on Monday and was recovering at home.

Police spokesperson Frederick Van Wyk confirmed the shooting. “Around 12pm law enforcement were busy inspecting houses authorised by the Department of Housing for re-evaluation in The Range across from Epping Forest.”

“Shots were then fired from the crowd at law enforcement officers. Two children were struck by stray bullets. An eight year old boy was fatally wounded and a 12-year-old girl was injured and transported to a nearby medical facility for medical treatment in Debton Street, Epping Forest.” Van Wyk said an investigation was ongoing and no arrests had been made.

“Mr Esau needs to do something. I want my house back and I want it back today. If we cannot build our houses where are we supposed to go? Where are our children supposed to go? Must we squeeze each other in one flat? I am currently sleeping on the floor with my baby in my mother’s house and I am pregnant,” said Turner.

But Elsies River ward councillor Charles Esau contradicts Turner’s story saying that the “structure” had been recently erected. “There were warnings from the housing department of the erection of illegal structures.”

“The structure was erected next to a community rental unit (CRU), and based on that the owners were instructed to not continue erecting the structure. But they did not adhere to the call and they continued building.” He said law enforcement acted on complaints from the community about the structure.

But Turner denied that she had been warned prior to the demolition, and accused Esau of lying.

Mukaddam said that community leaders had met with Esau on Tuesday in a closed meeting at the Elsies River police station and had come to an “amicable resolution”.

“We questioned Esau about the demolition and told him that law enforcement needed to follow proper processes before commencing with demolitions. We came to a decision to set up a committee that would communicate directly with the councillor, to avoid situations such as these, because there has been quite a problem with communication and accessibility,” said Mukaddam.

In response to detailed questions from GroundUp, City of Cape Town spokesperson Jean-Marie de Waal Pressly said only that “one structure was removed to protect a housing project there”.

Next:  Can you guess the order these photos were taken?

Previous:  No evictions or demolitions without a court order, judges rule