“Everything here in Qunu has collapsed after Madiba passed away” 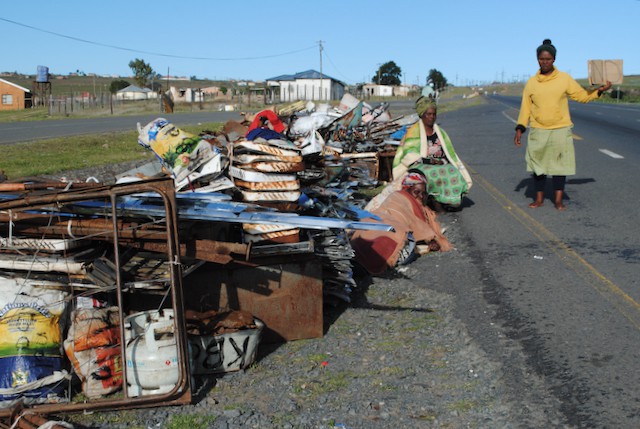 Khuselwa Bandla, like many Lwalweni villagers, hitchhikes on the N2 opposite the Madiba homestead in Qunu for trucks to take them to Durban to sell the scrap they have collected. Photos: Mkhuseli Sizani

Many unemployed women in Qunu in the rural Eastern Cape have abandoned their vegetable gardens to collect recyclable scrap to earn cash to feed their families.

Sometimes they sleep for days next to the N2 and other major roads, guarding the scrap they have collected, hoping for a truck to take them to the recycling centres in distant Durban, 450km away.

We spoke to five women from Lwalweni village, Qunu, who were waiting on the N2 roadside, opposite the Madiba homestead.

“Everything here in Qunu has collapsed after Madiba passed away [in 2013],” said No-Andile Nompoko, a 62-year-old widow.

“There are no [Public Works] projects for youth and women to collect rubbish. The roads are not maintained. The access tarred road that Madiba built for us is full of potholes. These are projects that could create jobs for our children,” she said.

“I am the only breadwinner at home … Three of my children have no jobs. They all depend on me. In the past, our husbands used to leave us and work in the mines, but all those things are no longer happening.”

The water crisis has played no small part in this shift in livelihood. Taps run dry for weeks at a time and the villagers share springs and ground water sources with livestock. 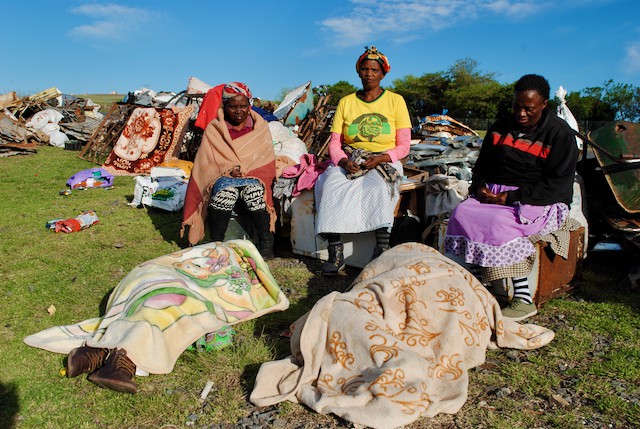 She said when Mandela returned to his homestead people were planting vegetables in their home gardens in order to sell and feed their families.

“Water was also available in our taps to sprinkle our gardens,” she said. “But after his death, we suffered with water and his garden project also shut down.”

She was referring to garden projects for the community at Madiba’s homestead where many people from Qunu worked. Each person was given a small plot to water, weed and plant vegetables, and they were paid R50 when they worked there.

“I became a domestic worker in 2008 until 2020 and I was earning R1,000 a month. My duties included cleaning, feeding of pigs and planting of the garden. I worked for eight hours [a day] or more sometimes. I had to endure those abusive working conditions because I didn’t want my children to go to bed with an empty stomach.”

“Mandela’s death made us victims of wealthy people,” said Hako.

She said the R350 Covid grant allowed her to quit domestic work and pursue collecting recyclables, which earns her more. She collects scrap lying around the villages.

Hako had brought her collection by bakkie to the roadside the previous afternoon. They can wait days for a lift. The women take turns sleeping and guarding the scrap.

“No matter if it rains or gets very hot, we won’t move until we get a lift. We buy food from nearby spaza shops, because our homes are very far from the road. We have a young man, who we pay a R20 a day, to look after our scrap when we go to the river to wash ourselves.”

The lifts are not free. She said the truck drivers demand R600 per person together with their scrap; some want R900, but that is too much for them. They return from Durban by bus (R280) or taxi (R320).

After expenses they still earn enough to make a monthly trip to Durban worthwhile. If they sold their scrap in Mthatha, they’d only get R300 to R400. 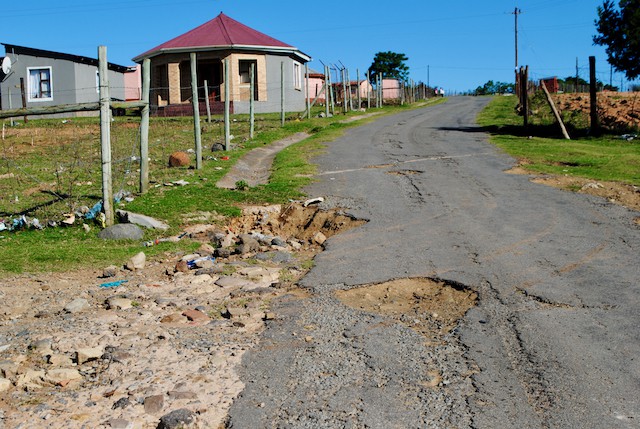 The tarred access road in Lwalweni that “Madiba built” is potholed, cracked and not maintained.

The oldest of the group was Nobongile Bokoboko. She is 81 and has been collecting scrap since 2014. “Our gardens are dry because there is no water,” she said.

“I have been collecting scrap … carrying it on my head because my social grant is not enough to feed my family. Four of my grandchildren are still at school and I am unable to pay their school fees. My burial policies will collapse if I cannot collect the scrap,” said Bokoboko.

Masiza Mazizi, provincial spokesperson for the Department of Rural Development and Agrarian Reform, said Qunu is among the poorest wards in the country. He said there was an “anti-poverty strategy”. He said in the current financial year, each local municipality would assist 800 households, 40 in each ward, with “food production input packages”. He did not say what this was.

Mazizi said the department is “exploring other avenues to provide water to our communities, in partnership with service providers, for example the World Bank”.

Next:  Young gardeners are building a fynbos corridor across the Cape Flats

Previous:  SANRAL: Getting the facts right on the N2 toll road through the Wild Coast