East London eco-park is in ruins

A multi-million rand eco-park in Gompo, East London is now a white elephant.

Work on the park started in 2012. It was officially opened in April 2013 by the then deputy minister of Water and Environmental Affairs Rejoice Mabudafhasi and the Buffalo City Metro Mayor. The project cost over R14 million.

According to the plaque in the park, it was built for the education of future leaders, as part of the department’s constitutional mandate to ensure the environment is protected for the benefit of present and future generations. It included several braai stands, beautifully manicured gardens and walkways, a playground and a small soccer field that also served as a basket-ball court.

The days of enjoy braaing are long gone. Many of the brick braai stands and benches are now broken or vandalised. Long grass and weeds hide the remaining braai stands. The toilets are locked and the playground is now a danger to kids wanting to play there.

The park is not without controversy. Residents complained about its construction in 2012. Some claimed it was a haven for criminals. School children were afraid to walk through the park as they feared being attacked.

Resident Nelson Khiba said he moved to Gompo in November last year. He said the soccer field was cut and that children did play soccer over weekends. But he said there is no other activity at the park.

Another resident, Eric Mbiko, said he moved to Gompo three years ago. He said the park was used before it became neglected. Mbiko said children still play on the broken apparatus and even swim in a tiny pond in the park.

Buffalo City Metro Municipality spokesperson Bathandwa Diamond said: “The City has not neglected the park. Grass cutting is done regularly. However, due to the rainfall the City has received in the last few weeks the grass has grown again.”

“The next schedule for grass cutting is the last week of January. The City has also found out that there have been acts of vandalism … and that criminal activity has been taking place in the park,” added Diamond. “This is due to lack of security that the City is currently addressing for all facilities across the Metro. There are plans in place to upgrade the park once security has been addressed fully.” 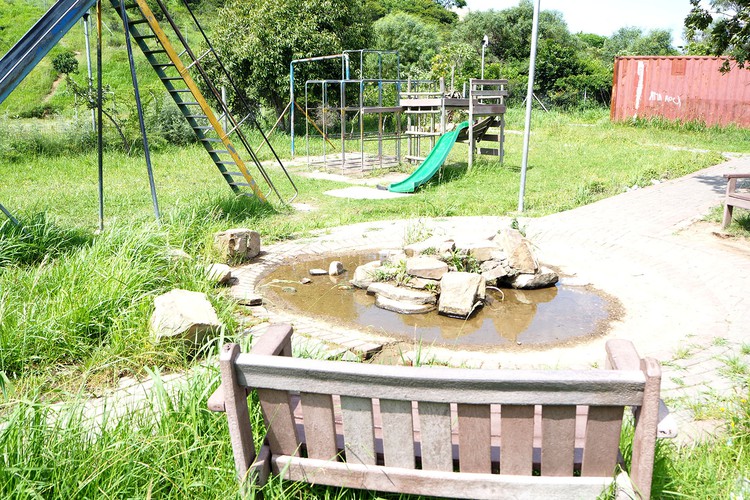 The apparatus and pond in the park are in disrepair. Photo: Patrick Kukard

Next:  Some immigrant children are still being turned away from schools