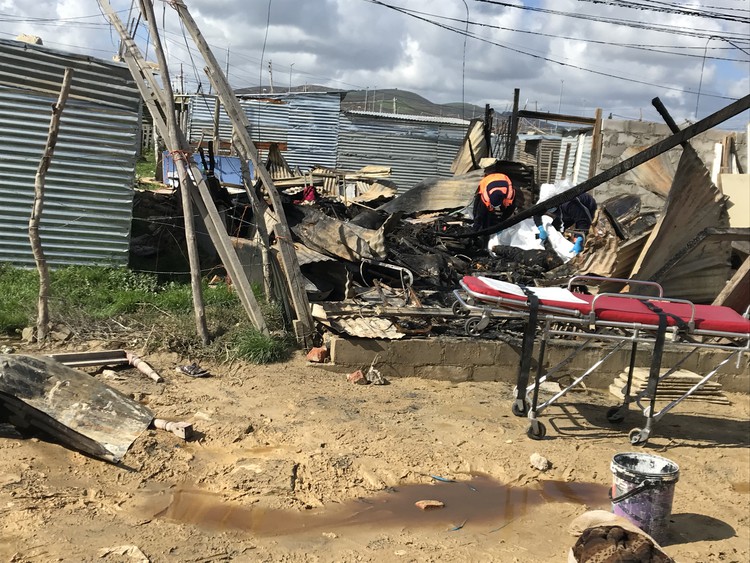 Officials from the Western Cape Forensic Pathology Services remove the charred body of a man who burnt to death in a shack fire in Eluxolweni, Zwelitsha informal settlement in Dunoon on Monday morning. Photo. Peter Luhanga

A man burned to death and another died by electrocution while helping families put out the fire in Eluxolweni at Zwelitsha informal settlement in Dunoon on Monday.

Residents blame one of the illegally connected electricity wires lying across the settlement for the second death.

Police cordoned off the site with yellow crime scene tape. Behind the tape, the body of a man was covered with a blanket.

Table View SAPS spokesperson Captain Adriana Chandler confirmed that two men died shortly after 3 am on 9 August. “One person was declared deceased at the scene. During an attempt to extinguish the fire, another person was found dead. It appeared as if he was allegedly electrocuted by underground cables.” The names of the two men can only be released once they have been identified.

Neighbour Zintle Njeza, 29, said she was woken up by loud screaming. When she ran outside, she saw the deceased man’s home engulfed in flames. Njeza explained that the man who was electrocuted had helped other residents pass along buckets of water to extinguish the fire.

Njeza said the electrocuted man was Mozambican and had helped them fight in 2019 for the land they currently live on. She said the other dead man was from Cameroon and sold second hand books and electrical appliances from his rented shack. Several Cameroonian nationals gathered at the site.

Zyta Ndong, vice president of the Cameroonian Nkulu Betie Association in the Western Cape, said the man had lived in Sea Point before the Covid-19 lockdown. He moved to Zwelitsha after he could no longer earn an income and ran out of money to pay rent. According to social media, the deceased was well known by the local Cameroonian community and messages of condolences were sent to his family.

City of Cape Town spokesperson Luthando Tyhalibongo said fire crews from Milnerton, Brooklyn and Melkbos had responded to the fire. The first crew to arrive had to be escorted into the area by police.

The cause of the fire, Chandler said, is under investigation.

Next:  Elderly people waited in vain for hours for vaccines at Gqeberha site