But minister Motsoaledi this week temporarily suspended certain services, including applications for new IDs, passports and all marriage services 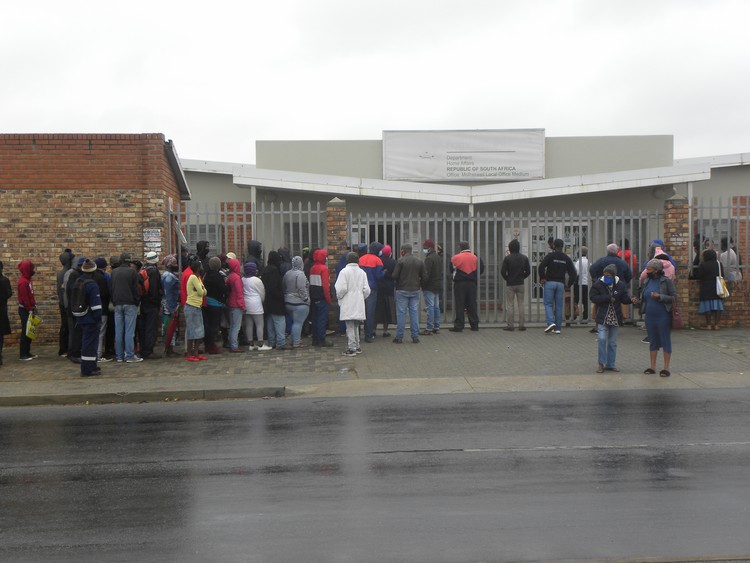 Dozens of people, most of whom said were there to apply for IDs, waiting in the rain outside the Home Affairs offices in Motherwell, Port Elizabeth on Wednesday. Photo: Joseph Chirume

A group of people who say they spent a number of nights camped outside the Home Affairs offices in Motherwell, Port Elizabeth say they would rather risk arrest for flouting curfew rules to try and apply for an identity document.

Over a dozen people who were huddled together to shield from the cold weather on Wednesday said their lives would come to a standstill if they could not be assisted.

This comes in the wake of an announcement by Home Affairs Minister Aaron Motsoaledi to temporarily suspend certain services, including applications for new IDs, passports and all marriage services. Only matriculants may apply for new IDs with a few other exceptions.

A man, who asked not to be named, said his ID was recently stolen. He has been visiting the department’s offices in Motherwell for the past three days.

“I have no choice but to break the curfew regulations in order to go to Home Affairs. I can’t live without an identity document. I have bank accounts and other transactions that need proof of an ID. I have to risk being arrested,” he said.

Mandisa, who did not want to give her surname, said after spending hours in the queue on Wednesday, she was told that Home Affairs would only be processing applications for identity documents after 15 February.

“I came here twice and I braved rain and the cold weather overnight only to be told that they will process IDs after 15 February,” she said.

“I can not access my bank account because they want an original identity document not this temporary one. Could the President please order banks to accept temporary identity documents that are supported by affidavits so that we can be served,” she said.

Motsoaledi in a statement on Tuesday said they were suspending some services in a bid to limit congestion at their facilities and the spread of Covid-19 at the offices.

Between March and December, 266 of the department’s 412 offices had to close at some point due to staff testing positive. During this period, 532 staff tested positive for Covid-19 mostly in Gauteng, Eastern Cape, Western Cape and KwaZulu-Natal offices.

Motsoaledi said in the first eight days of 2021, 116 officials had tested positive. This also coincided with the death of seven front office staff.

“For collection of ID, please do not come to Home Affairs unless you are specifically invited via an sms. We are proposing that the births and deaths be registered at the health facilities where they occur,” said Motsoaledi.