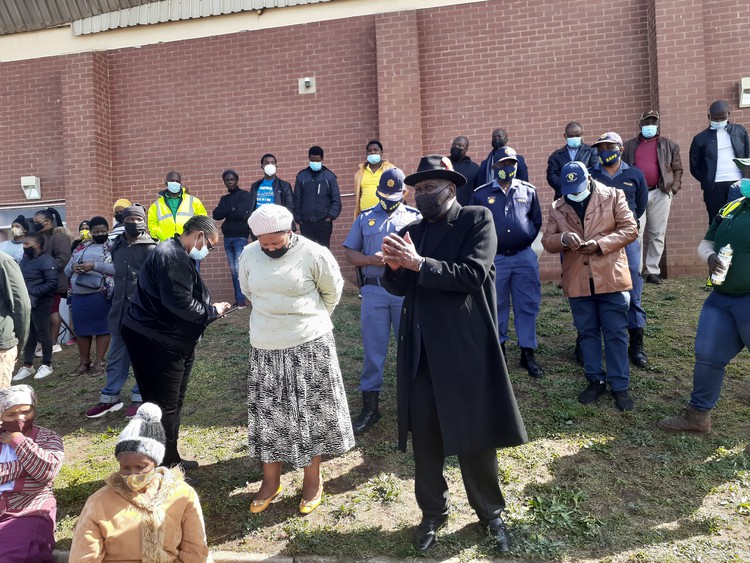 Police Minister Bheki Cele and Amaoti residents during his visit to several areas in Durban on Sunday to give an update on investigations into the Phoenix murders. Photo: Nokulunga Majola

At least 50 people marched to the Phoenix Police Station under the banners of the African United Activists and Qina Mhlali Movement in Durban at the weekend.

They are demanding that a judicial commission of inquiry be set up into the killings and attacks that occurred in Chatsworth and Phoenix during the unrest in KwaZulu-Natal last month.

During a visit to the area, Police Minister Bheki Cele revealed that 36 suspects were arrested in connection with the killings in Phoenix during the riots. He said other affected communities include Bhambayi, Amaoti, and Zwelisha.

Cele was accompanied by KwaZulu-Natal Provincial Commissioner Nhlanhla Mkhwanazi and MEC for Community Safety and Liaison Peggy Nkonyeni, along with the Peace Committee of community representatives.

“It’s always been clear that people want peace. But peace goes hand in hand with justice and I believe police have kicked off this process on a high note. The detectives are working closely with the prosecution team to put together solid cases,” Cele said.

At the march on Saturday, activist Sfiso Manyala told GroundUp, “Many people struggled after they were injured to access services like clinics. They had to go to other areas. We want services like a clinic and mobile police stations in Bhambayi and Zwelisha.”

He said people from these areas still have to travel to Phoenix for the clinic and police station.

According to the Peace Committee of Bhambayi, three people died in the area and 25 were injured during the unrest. Committee member Blessing Nyoni said they know of at least four people who are considered “missing”.

“We don’t know if they are dead, injured, in hospital or just hiding somewhere. We are still getting reports of all the damages, injuries and deaths,” said Nyoni.

She said ten vehicles were also damaged and burnt. “Most people have not registered case numbers with the police. We encourage them to, so that we can have a record of everything and everyone that is affected,” Nyoni said.

Bongani Mokubung, who says he was attacked and injured by vigilantes during the riots on 12 July, said, “I still have a lot of questions. I saw so much hate in people’s eyes as they beat me up. How were they defending their homes when they were attacking people on the streets? Not all people who were travelling on the road during that time were criminals, so it is unfair to label all of us as one.”

He said he will only find peace when both looters and vigilante groups face the full might of the law.