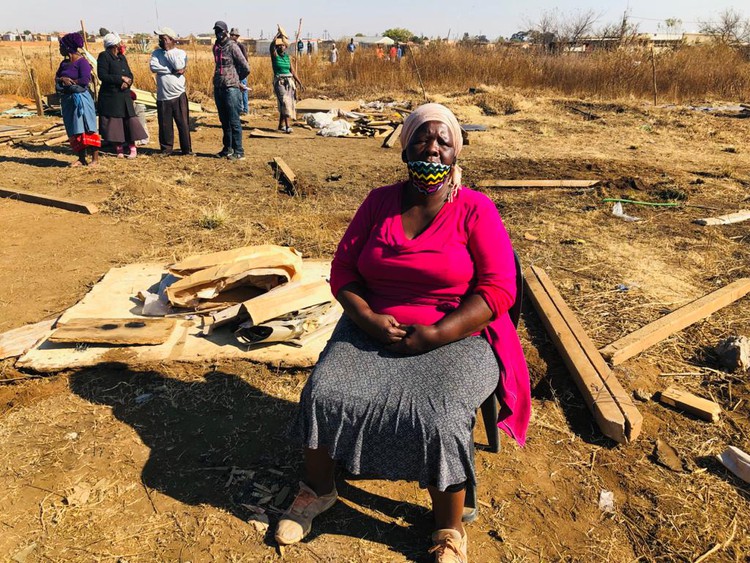 Pensioner Emily Mahlangu sits with what remains of the shack she shared with her grandchildren before it was demolished by authorities in Tsakane on Thursday. Photo: Kimberly Mutandiro

Police were called to disperse protesting residents in Tsakane on Thursday after about 60 shacks were demolished at Marikana informal settlement. Some of the occupiers claim to have moved onto the land over four months ago while others had only begun erecting their homes in the last week.

During demolitions, some community members reportedly threw stones, breaking windows of an ANC ward committee member’s house in the area. They accused him of alerting the councillor and metro police to the new occupation.

“I felt powerless. They can shoot me if they want. What’s there to live for? They have taken everything,” said Mahlangu, who supports five grandchildren.

Mahlangu explained that she moved to Marikana from Extension 6 when she could no longer pay the R250 rent for a shack. None of her grandchildren receive social grants because they do not have birth certificates. They rely on her pension to survive.

“Where will l get material to rebuild? Where will l sleep with my grandchildren tonight? All my money went to buying and building my demolished shack.”

Most of the occupiers we spoke to said their pleas for housing “fell on deaf ears” and that they became frustrated after hearing that vacant land in the community was allegedly being sold to churches instead of being used for housing.

Cynthia Sithole said she has lived with her husband and three children at Marikana for four months. She sells vegetables and her husband is unemployed. Sithole said they were caught unaware by authorities who came to demolish their home while they were not there. “We had lived four whole months peacefully. As of today we don’t know where we will go,” she said.

Ntabiseng Rakaki, who lived with her four children, said, “When we saw land being sold to churches, we took it as our cue to occupy land. It is unconstitutional for them to remove us because we had lived here for more than 24 hours,” she said.

Lungelo Minyaka, who lost his job due to the pandemic said, “This is our last chance before elections to get attention. We have been mistreated, betrayed and no one has cared for us.”

Ward 111 Councillor Petros Mondlane and Ward 81 Councillor Makhosazana Gloria Gwayana told GroundUp that they have been responding to the residents’ complaints despite it being an unlawful occupation.

Mondlane acknowledged that churches had been allocated land in the area, but denied allegations of selling plots illegally.

Thepa, however, denied claims that rubber bullets had been fired at protesters. “It is within our mandate, according to the City bylaws, to demolish all illegal structures. The structures are kept at our warehouse and can be released should the owners come to claim them. However in most cases people do not claim structures after demolitions.”

The occupiers say they will rebuild their shacks.

Next:  Health department is likely overcounting its vaccine supply