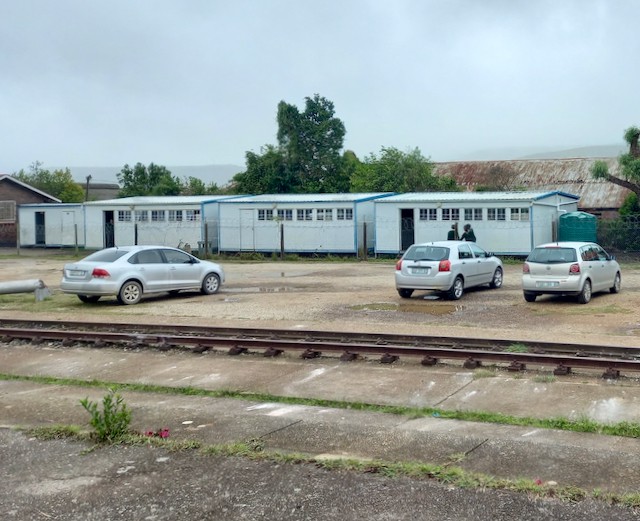 Despite a court order in 2010 that the Eastern Cape Department of Education must provide safe and adequate premises to build a proper facility for the Amasango Career School in Makhanda, nothing has changed for the school in ten years.

The school currently operates out of six prefabs provided by the department. It is located on the edge of an abandoned railway line. The Grahamstown High Court’s order said the department must “implement a plan to commence construction of a new school” and confirm by affidavit that it “has been budgeted for”.

Last month, parents marched from to the District Department of Education to express their concerns about the failure of government to comply with the court order.

Amasango provides for special needs children whose rights to basic education and equality are often not honoured. It provides children off the street and others with education and hope for a better life.

According to school principal Cynthia Linda Ngamlana, it has 106 learners, 19 educators, and 20 support staff (11 paid by the state and nine by the School Governing Body). Two streams of curricula are offered – the standard curriculum and Occupational Technical Curriculum.

“The present building is small and no workshops can be added because of the limited space available,” she said.

In a press statement, the school said unregistered portions of farms located in Makhanda, currently registered in the name of the provincial Department of Human Settlements, need to be transferred to the Department of Public Works.

GroundUp received contradictory replies as to what is causing the hold up, from the departments of human settlements ( who own the land), public works (who will build the school), education (who blame the municipality), and the municipality (the mayor says he is unaware of the issue).

In August, Cameron McConnachie of the Legal Resources Centre (LRC) wrote to the MEC for human settlements: “Your failure to transfer the property is causing ongoing hardship and preventing the [education department] from complying with the court order.”

Masiza Mazizi, spokesperson for the MEC of Human Settlements, said the department was unaware of the letter. Mazizi confirmed that the land is owned by the provincial Human Settlements department but would have to be transferred to the municipality via the Department of Public Works.

But Eastern Cape Department of Education spokesperson Mali Mtima said that the hold up is caused by the Makana Municipality. “It is the municipality that is supposed to transfer and register the land to the Eastern Cape Education Department … The MEC of Education recently has asked the public works department to intervene on this matter. The delay is not on our side. We can’t do anything and the process has stalled.”

Makana Mayor Mzukisi Mpahlwa said, “I will need to get more info about this school. It is the first time I hear about the problem. I will follow it up and come back to you.”

Next:  Millions of rands of housing materials dumped since 2018

Previous:  Police officers caught on video throwing disabled man out of his wheelchair