“By the time they get to school, they are tired, thirsty and hungry from walking” 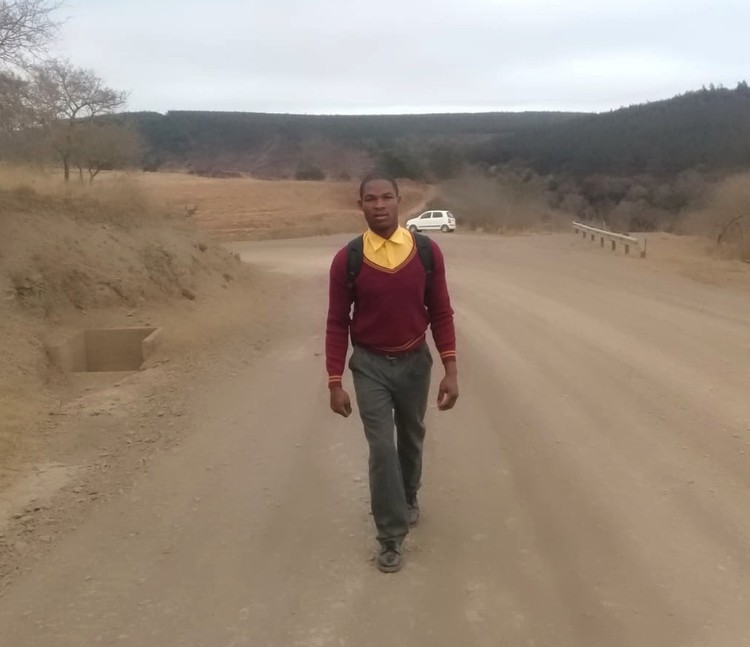 Grade 11 learner Zwelakhe Mnomiya walks approximately 11 kilometres to his high school in rural Kranskop because the KwaZulu-Natal education department says there’s not enough money to provide him and a dozen other learners from his village with transport. Photo: Supplied

Every day, Zwelakhe Mnomiya from Gqamu in KwaZulu-Natal walks about 20km to and from school.

The grade 11 learner is among dozens of children who make the journey on foot to Gcotoi High School in rural Kranskop.

According to Gcotoi High, more than 100 learners walk between 11 and 20 km to and from school daily. These learners come from Gqamu, Mkhondeni, Osizweni, Dakeni, Nkawini and Mhlabathini. When they can afford to, they pay between R20 and R40 for transport a day.

In 2016, while hitchhiking to school, three learners were seriously injured when the bakkie that had given them a lift, veered off the road and crashed into a house nearby. This was one of several serious incidents that motivated parents to petition for scholar transport.

Zwelakhe’s uncle Khayelihle Zondi said his nephew had to leave home at 5:30am to be in school at 7am.

“We used to do the same thing when we were in school. How long are these children going to suffer? By the time they get to school, they are tired, thirsty and hungry from walking. What are they going to learn then?”

Zondi said if learners are lucky, they get lifts along the way. “Not all parents can afford transport fees. If you have three children attending the same school, you pay R20 a day for each child,” he said.

“As parents, we have addressed this matter with the school and the KwaZulu-Natal Department of Education but nothing has happened. All we get are empty promises. In 2019, we took to the street to raise our concerns and the department officials promised that our children will get transport but we are still waiting,” said Zondi.

At issue, he said, was how the department measured the distance each learner travelled daily. “[Officials] agreed that it was a long distance to be travelled on foot but still, nothing has been done.”

Sphiwe Ngidi from Osizweni has two daughters in grade 10 at Gcotoi. He said most parents hired private transport because of the long walking distance to school. He too said parents had discussed the issue on several occasions but their pleas fell on deaf ears.

According to documents seen by GroundUp, the school first applied for scholar transport in 2014. It said the department had been updated with the recent number of learners in need of transport every year.

In its latest request last Friday, the school again made the request for scholar transport for learners. There has been no response from the department as yet.

Chairperson of the School Governing Body (SGB) Sphindile Ndlovu said: “A neighbouring school has four buses but we don’t even have one. All we get are empty promises. We have lost a lot of learners over the years because of this. Parents prefer to send their children where they don’t have to pay for transport.”.

On January 26, the DoE released a statement saying that it would provide effective scholar transport but would require about R1 billion to do so. This was not available as the department only got a R218 million grant from the national department, it said.

“We however, continue to engage both National Treasury and Provincial Treasury with an aim of securing more funds to expand the service to more needy learners who are currently not benefiting,” said the department.