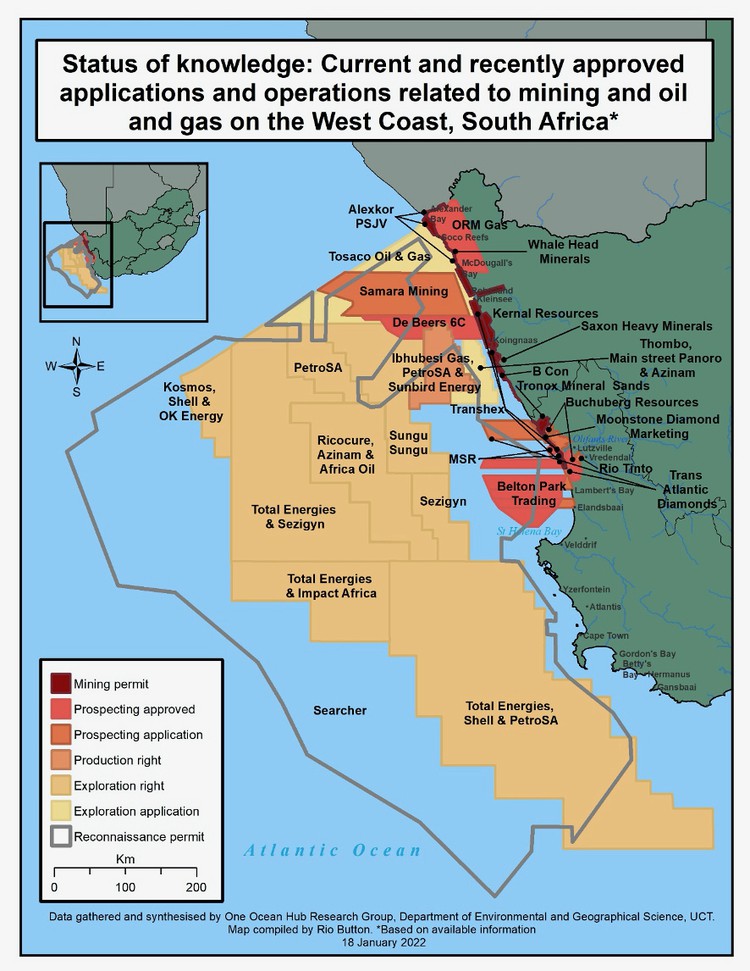 Experts and environmentalists have raised concerns about whether the impact of numerous prospecting, mining and marine surveying operations on South Africa’s coastal waters is being given adequate weight when authorised individually.

In December the Department of Mineral Resources and Energy (DMRE) ) gave environmental authorisation for local company Belton Park Trading 127 to prospect for diamonds, gemstones, heavy minerals, industrial minerals, precious metals, and ferrous and base metals in three marine blocks just off the coast about 200km north of Cape Town.

Professor Merle Sowman of the Department of Environmental and Geographical Science at UCT has lodged an appeal, submitted jointly with research assistant Michael Lambrecht.

Sowman told GroundUp that ad hoc prospecting and mining applications as well as other development activities were being granted without a proper assessment of the cumulative impacts of these many operations on the coastal and marine environment.

In a 2014 strategy document, the Department of Forestry, Fisheries and Environment (DFFE) itself refers to assessing cumulative impacts to ensure that the “full range of consequences of actions is considered” in order to avoid “the tyranny of small decisions”.

Also appealing against the Belton authorisation is the Western Cape Department of Environmental Affairs and Development Planning, which raised the issue of the cumulative impact as well.

“The DMRE has approved multiple and sometimes overlapping survey, prospecting and mining activities on the offshore area along the West Coast without any attempt to assess the cumulative impacts,” the appeal states.

“The reports submitted by Belton Park as well as the Environmental Authorisation do not provide any indication that prospecting was considered in terms of cumulative impacts and if mining activities would be a desired outcome for the area.”

According to the province’s appeal, it is “imperative” that a strategic view be adopted, including the identification of sensitive areas where no prospecting or mining activities will be considered in line with a 2018 National Biodiversity Assessment.

The provincial department also raised concerns about whether local fishing communities had been properly involved in the approval process.

One of the questions in DFFE’s Appeal Questionnaire to appellants is: “Would you agree to the activity proceeding if your concerns can be addressed by rectifying the process or mitigating or eliminating the impacts of the activity?”

The province replied: “No. The proposed activities are incompatible with the conservation and ecotourism proposed uses of the areas and in conflict with local communities’ dependence on local ecosystem services.”

While not fundamentally opposed to any development activity on the site, the province believed that prospecting and mining activities were “inappropriate for the area”.

Sowman told GroundUp that her research group has been monitoring and recording the various prospecting, mining, oil and gas applications and their status over the past 18 months.

“I wonder whether DMRE and DFFE have this overview – how can they be making informed decisions when they don’t have full information?”

The department was satisfied that if mitigation measures were applied, the impact would be “low” to “very low”.

DMRE did not refer directly to the issue of cumulative impact in its authorisation. However, it stated it was satisfied that the Belton project would not be in conflict with the general objectives of Integrated Environmental Management.

On Thursday, the Cape High Court will hear an urgent interim interdict application to halt a seismic survey off the West Coast by Australian geodata supply company Searcher. The interdict application is part of a legal challenge to the May 2021 granting of a reconnaissance permit to Searcher by Petroleum Agency SA to conduct the survey.

The applicants include West Coast fishing communities and civic organisations.

A similar “Shell” seismic survey off the Transkei coast has also been temporarily blocked by the courts amid concern over the lack of scientific certainty about the impacts of prospecting and mining in the sea, and the inadequacy of legally required public participation processes.

Previous:  Solitary confinement is illegal. So why is it happening in South African prisons?

It was reassuring to read that UCT's geographical sciences department and the provincial environmental department are challenging the recent swathe of on- and off-shore mining and drilling-related approvals around the Cape Coast. Cumulative impact is one of the considerations routinely ignored by licensing authorities whose main purpose seems to be getting on with business-as-usual (BAU), with scant regard for issues like climate change, biodiversity loss and sustainable livelihoods. We hope that such concerted action along with continued civil society protests and court interdicts will send a strong message to decision-makers that BAU and tick box processes are not acceptable or consistent with science-based assessments of our societal and environmental states. Let us drive that idea home.

Mining proposals for over 3 hectares of land in Hartbeespoort

I read this article about the mining activities in the Western Cape Coastal Region with great interest, as the residents in the Hartbeespoort Area in North West are facing the same predicament. We were recently informed via group WhatsApp messages about the intention to apply for prospecting rights in a protected area along the Magalies Mountain Range:
https://kormorant.co.za/2022/02/23/prospecting-applications-for-over-3-000-ha-in-hartbeespoort/.