Covid-19: A view from the townships

GroundUp’s reporters describe what they see

Some townships and informal settlements are quiet, the streets empty as people observe the rules of the lockdown. In others, life goes on just as it always did. GroundUp’s reporters describe the areas they know.

In areas like Hanover Park, where people live in cramped spaces and there is nothing but concrete, social distancing and staying indoors is possible, but would affect one’s mental health. Families have very little to entertain their children indoors, so the only relief can be found outside, where there is space. And even then, that space is threatened with gang violence.

In poorer areas, children are not streaming hours of content or turning to online learning sources as it is just not financially possible. Some families can barely afford electricity and food. - Ashraf Hendricks

No masks or social distancing. It seems that getting food trumps everything else. On the Cape Flats people don’t trust the police so I’m not sure how helpful their patrols are. The lack of parties and events are helpful for keeping people apart though. My friend bought cigarettes at a small shop for R40. So the price has gone up if you can find it. I imagine it’s the same for alcohol if you know where to look. - Ashraf Hendricks

Not much social distancing or masks. A friend of mine bought a pack of cigarettes for R120, and had to search hard to find it.- Lucas Nowicki

People don’t social distance - not at informal traders’ stands and not at big food retailers. I saw shoppers lining up to buy essentials at a jam-packed Shoprite in Site C, Khayelitsha last week. - Vincent Lali 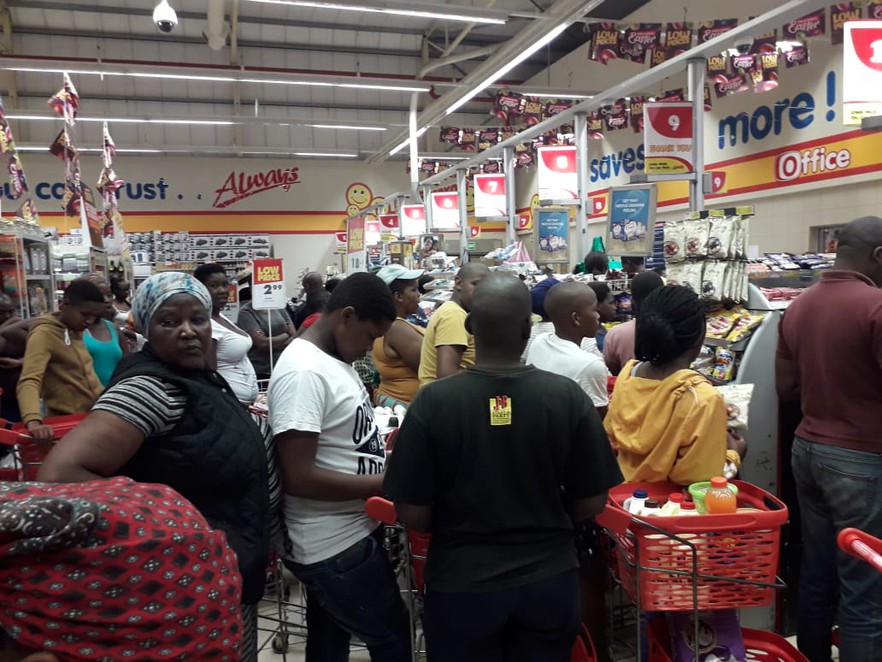 Usually, Hindel Road in Delft is crowded with taxis and private cars and dozens of shoppers battle to cross to and from Delft Mall. Now the road was deserted. From the mall, the road leads to Mfuleni, Silver Sands, Blikkiesdorp and other areas. Delft Main Road is also strangely quiet, with very few motorists and pedestrians. Delft residents seem to be obeying lockdown regulations. - Vincent Lali 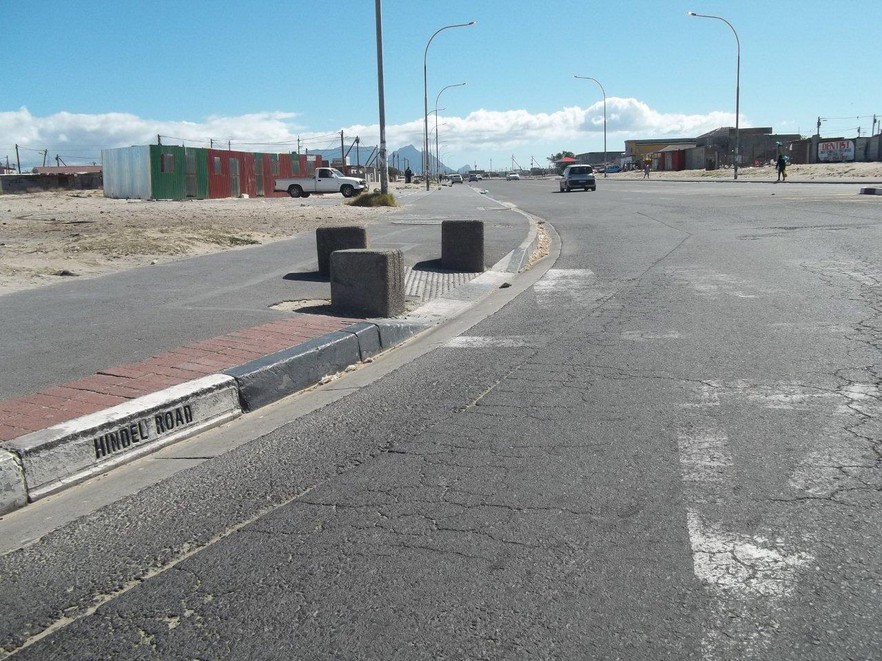 In Gugulethu Section 3, as in nearby Kanana and New Rest informal settlements, it’s business as usual. No social distancing. People are going about their day, going to Shoprite. A well known shebeen in Kanana is closed but residents who usually visit the spot still gather outside and just sit there on crates chatting to each other. In terms of alcohol, there are a lot of people still selling in Gugs, but at exorbitant prices. To find it you need to know who to talk to, but you also get those who advertise on their Whatsapp statuses. No masks or gloves are worn. - Mary-Anne Gontsana

At the Malmesbury taxi rank, taxi drivers have parked their taxis in line and it is deserted. Taxi driver Ayanda Mpikashe says life is tough for taxi drivers as they are only allowed to transport essential workers who work in shifts. When these workers are at work, the taxis are idle. Mpikashe said he is struggling to make enough to support his family.

Sixty-two-year-old William Bala, who lives alone in a one-room shack in Lingelethu, had not heard of the coronavirus. He doesn’t have a radio or television and doesn’t know what the lockdown is.

He says he is shocked when he goes to buy essential groceries after receiving his pension, and staff at the retail shops spray his hand without explaining to him why.

He is living normally as if nothing is happening around him. - Peter Luhanga 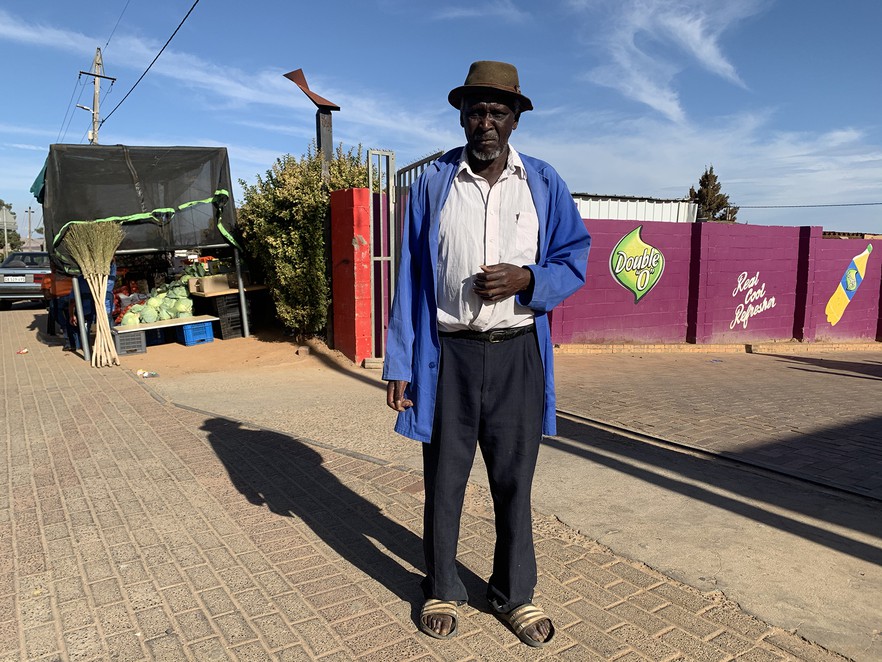 William Bala of Lingelethu in Malmesbury, has no radio or television and had not heard of the coronavirus. Photo: Peter Luhanga 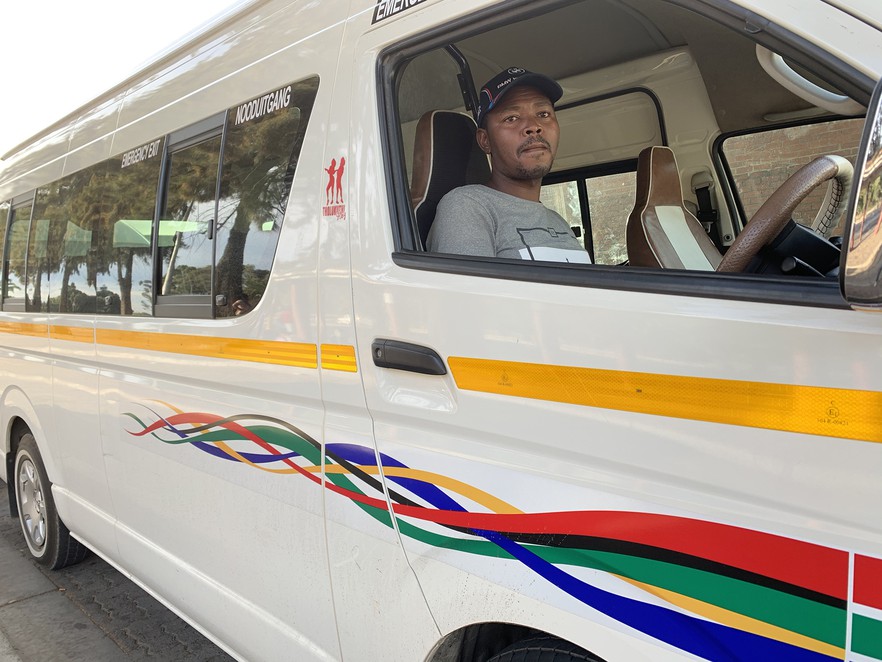 There was a soccer match at the end of my street involving over 50 people which ended at about 7pm. They were using broken school desks as soccer poles and I think the noisy match will start again today. - Thamsanqa Mbovane

It’s business as usual in Nelson Mandela Bay townships. Streets are full of people and children playing ball on the road. People have a negative attitude towards someone wearing a mask. Yesterday, a group of women said “surely there is Covid-19 in our area? Look at this journalist wearing a mask.”

Kids and the elderly are walking up and down with dogs. Some of the kids swim in salt pans on hot days.

Other people are busy drinking alcohol and making braais like on a holiday. Police are only visible on roadblocks or at a crime scene. Social distance does not exist at clinics and at crime scenes. Masks, gloves and sanitisers are not used at spaza shops. At clinics nurses battle to keep patients at a distance from each other. - Mkhuseli Sizani 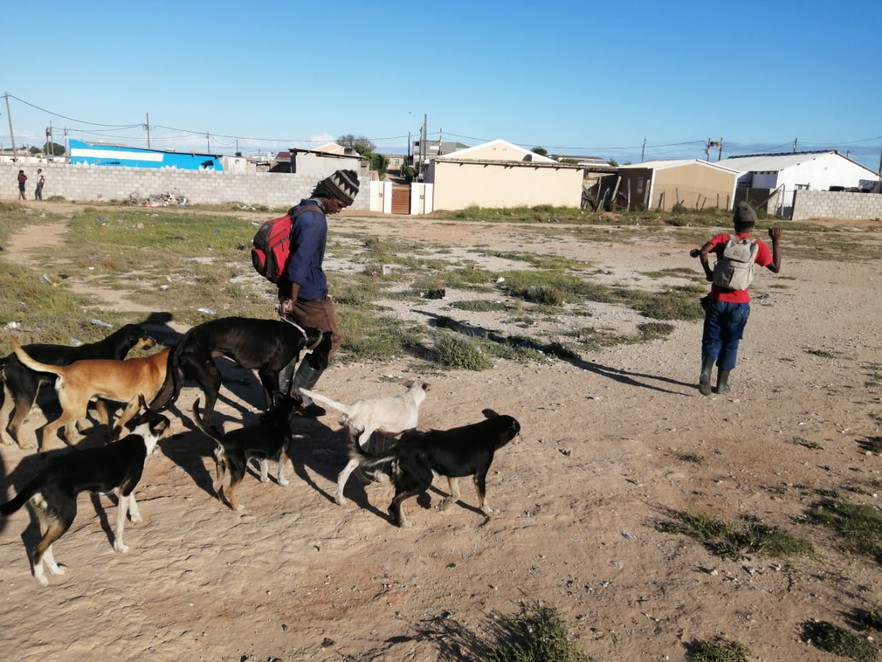 Most people in Motherwell, Ikamvelihle and Wells Estate are not practising safe social distancing. People say it is very difficult to adhere to the conditions given that they always stand in queues to buy groceries.

“We queue at clinics, at SASSA offices and we queue at communal water taps,” says Anelisa Msuthu who lives in Shukushukuma with her boyfriend. “It is a common feature of township life to stand in long and winding queues to get services. The conditions demanded by the government are foreign. They belong to the developed world.”

At the NU10, Motherwell clinic on 15 April, 300 people were crammed together outside the gate.

Police officers manning roadblocks are not telling people why they are turning them back. They don’t explain or give informal traders time to pack their stock. The police kick the stalls and destroy everything.

Jikelezas (small township taxis ) are also being turned back. Police do not give reasons. - Joseph Chirume 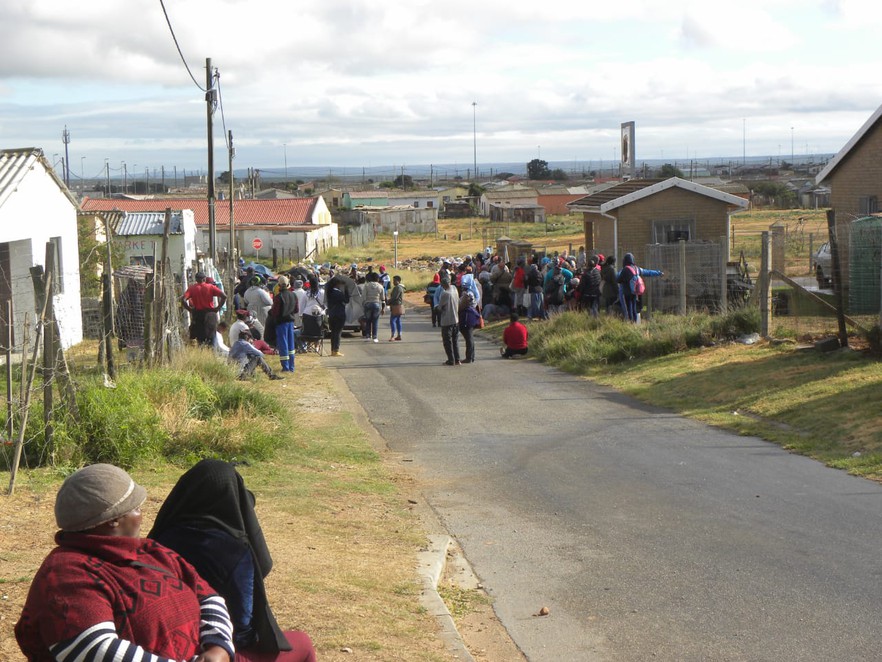 At Motherwell Clinic, people crowd together in queues outside and inside. Photo: Joseph Chirume

People are complying. Since the lockdown started, the streets have been quiet. Law enforcers come for patrols daily. Apparently, a few residents were given hot klaps on the first weekend of the lockdown. The news might have spread throughout the township that soldiers mean business and people are fearful of stepping out of their houses. - Zimbili Vilakazi

It’s business as usual, no masks, children playing in the streets, no lines at tuck shops. It’s the same in informal settlements as well. No social distancing. - Nokulunga Majola

It’s business as usual. People are in the street moving around. Takeaways are having a field day selling chips and quotas. No masks, no social distancing, children playing.

Police and soldiers came only once and scared people away but as soon as they disappeared people were back on the streets.- Kimberley Mutandiro 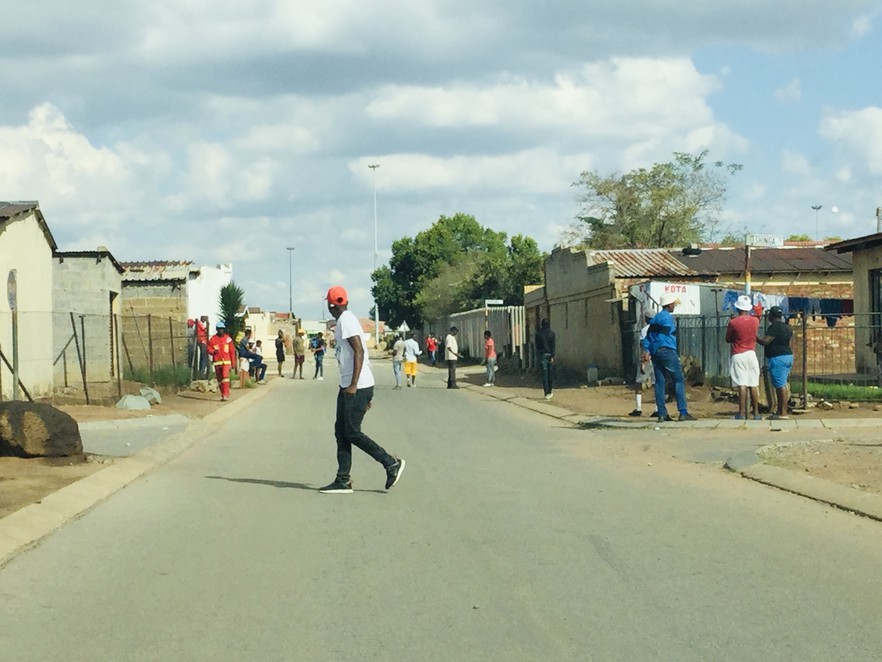 In Tsakane in Brakpan, it’s business pretty much as usual. Photo: Kimberly Mutandiro

In Tshikota township residents adhere to lockdown regulations only when police patrol the area. Once police leave, life goes back to normal.

In town (Louis Trichardt) few people are seen in streets and most of them are carrying Shoprite shopping bags indicating that they have come to shop. Police patrol the streets and at times question people or order them to go home. They visit shops encouraging shoppers to observe social distance, but once police leave, people ignore the distancing. - Bernard Chiguvare 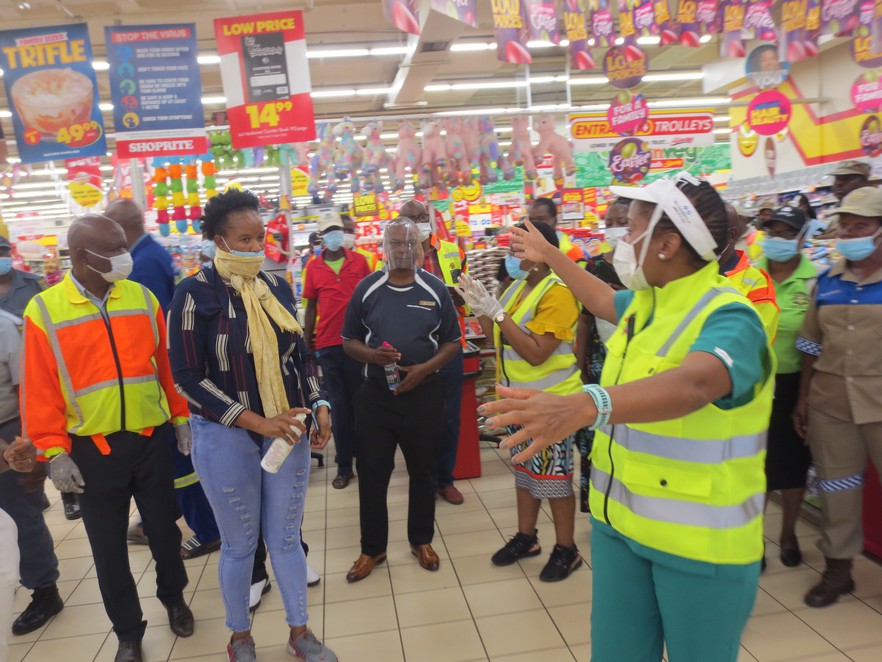 Limpopo MEC for Health in Limpopo Dr Phophi Ramathuba (right) had to tell the members of her own delegation to observe social distancing when she visited Shoprite in Louis Trichardt. Photo: Bernard Chiguvare

It’s business as usual. People have discovered where they can get liquor, though at a very high price. The information is shared via WhatsApp. Smirnoff vodka, usually R120, is R300. Jameson whiskey costs R550. A pack of cigarettes is R70 or R80 and single cigarettes cost R5 to R8.

Children are playing in the streets. They still walk in groups to the soccer fields.

In Pelham people are really complying. There are notices up reminding us to keep safe and avoid going out. - Nompendulo Ngubane

Many shops were closed, but opened when they got permits.

At the mall, only a certain number of people are allowed in. As people queue to get into the shops, there is social distancing. There are lines pasted on the ground one metre apart to show people where to stand in the queue. People’s hands are sanitised as they get into the mall and into the shops. Only food shops, pharmacies and banks are open.

But outside the gates of the mall there’s no social distancing. A few people wear gloves and masks. - Nompumelelo Mahlangu 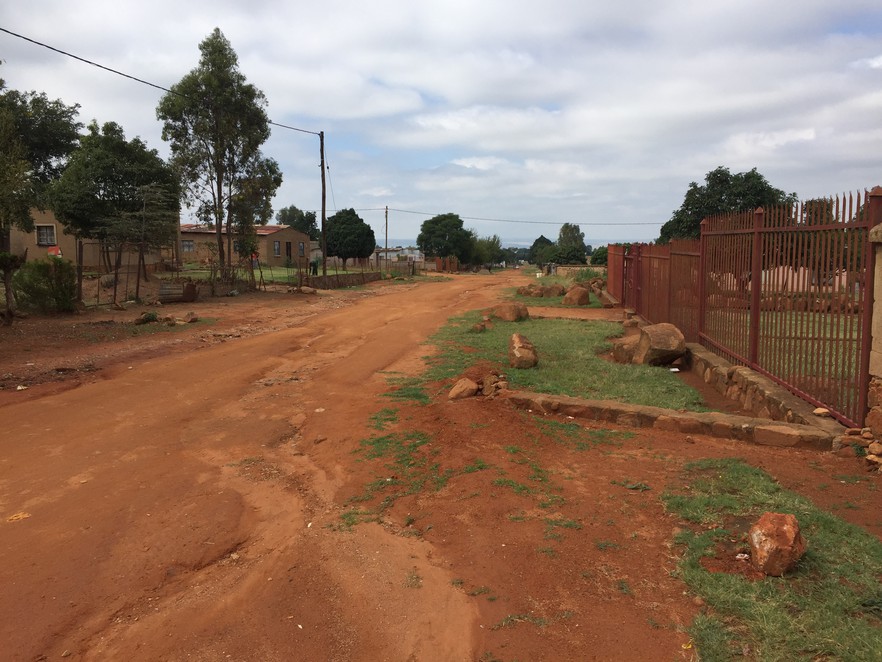 A quiet street in Kwaggafontein during the lockdown. Photo: Nompumelelo Mahlangu

Previous:  Covid-19: New regulations to get water and sanitation packs to communities