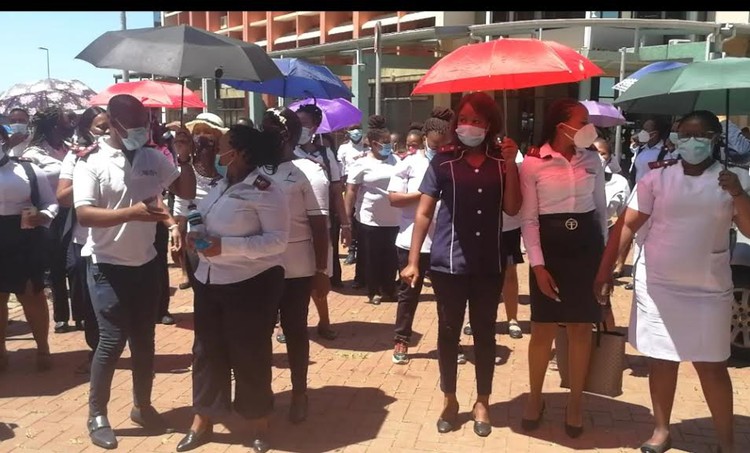 About 100 nurses who have completed their community service protested on Wednesday outside the Eastern Cape health department in Bhisho, after hearing that they would not be getting jobs. Photo: Johnnie Isaac

The Eastern Cape government has reversed a decision by its provincial health department to terminate the employment of 625 post-community service nurses.

The nurses, who completed their community service in the Eastern Cape, often treating Covid-19 patients, had not been given contracts because the provincial health department said it did not have the money to employ them.

The department said it had been forced by the Covid-19 pandemic to redirect its money to fighting the disease.

As a result, the nurses who would normally have been absorbed into the health care system found themselves facing unemployment.

Nurses in the protest told GroundUp that offers of employment were withdrawn on 1 February, the day they were supposed to sign their new contracts.

Protesting nurse Nomvo Makata said: “We were told to bring documents such as proof of qualifications, IDs, bank letters and CVs because we were going to sign appointment letters.”

“On 1 February we were actually informed that there’s a new communication from the [Acting] head of the department of health in Eastern Cape [Dr Sibongile Zungu] that there is no money to employ us, therefore we must go home. They will call us when there is money in the next financial year starting from April.”

She said most of the nurses had been treating patients in the Covid-19 wards as many of the experienced nurses were falling sick, or had comorbidities.

Makata said at times she had worked alone at Bhisho Hospital where she was stationed, because some of her colleagues were in isolation, in quarantine or had died. She said the failure to employ the nurses would harm the understaffed Eastern Cape health department.

Some of the nurses are breadwinners, have loans to pay and school fees for their children.

But following a meeting between the Eastern Cape Director General Mbulelo Sogoni, Acting Health Department HOD Dr Sibongile Zungu and the head of the provincial Treasury Daluhlanga Majeke the nurses have received good news: they can return to work next week.