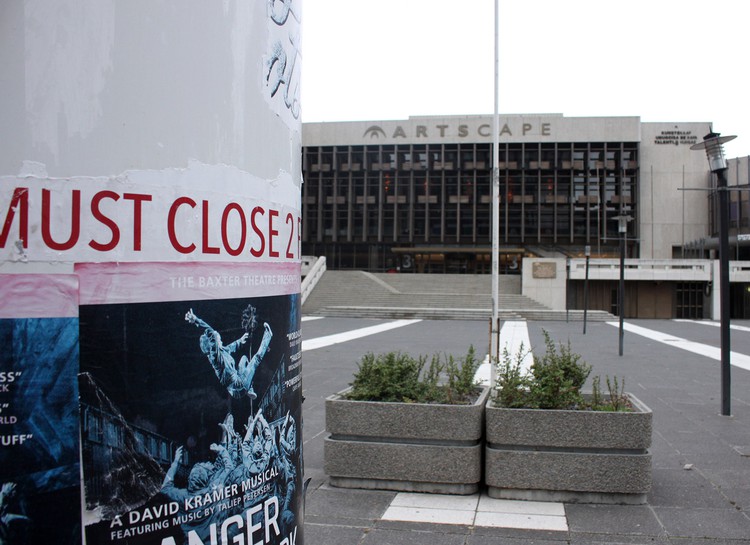 Only 488 of 5,000 of the artists who applied for government relief have been paid so far. Theatre directors expect to remain closed until at least 2021. Photo: Steve Kretzmann

It took two months before a tiny percentage of artists received any relief funding from the government. This after losing their income when theatres and performance venues shut down with immediate effect from 15 March.

Of over 5,000 applications from artists seeking relief from the Department of Sports, Arts and Culture, only 488 artists have been paid out, eight weeks after Covid-19 relief funding for artists and athletes was announced.

A R150-million relief fund, which is to be shared by artists and athletes, was announced by the Department on 25 March, with criteria for applications announced on 29 March. The submission deadline was initially set for 4 April, but was extended to 6 April because many artists were not able to obtain the necessary documents in time.

“If we cannot provide relief to artists in a period of six weeks from the date it was announced, then there’s something fundamentally wrong with the way we understand poverty,” said Market Theatre CEO Ismail Mohamed during a radio interview on 7 May.

The money disbursed was capped at a maximum of R20,000 per artist or company.

The R150 million set aside by the Department as a ‘relief fund’ has also been widely criticised because the money comes out of the existing budget for productions and events that were cancelled due to the lockdown, rather than being additional emergency relief funding.

“The Department has therefore reprioritised its budget allocation from quarter one to avail over R150 million to provide the much needed relief to practitioners in the sector,” said Minister Nathi Mthethwa on 25 March.

In a radio broadcast interview with Eusebius McKaiser on 7 May, the Department’s Director-General Vusumusi Mkhize said that there were 92,163 people directly employed in the arts and culture sector.

A further 335,000 people worked in support of the industry, with the creative and cultural industry supporting a further 698,000 people in ancillary services or crew. Mkhize said the sector cumulatively supports 1.1 million people.

These figures were backed up by the South African Cultural Observatory.

SA Cultural Observatory chief economist Jen Snowball said the creative economy contributed R74 billion to the economy in 2018, or 1.7% of the national GDP.

Snowball said that if the multiplier effect was taken into account (including people such as an accountant working for a theatre company or catering company employed in the film industry) the sector accounted for 5.5% of GDP.

One of the 4,512 artists who applied for relief but has not yet received anything, is Cape Town film choreographer Didi Moses.

Moses said she sent the department proof of cancelled contracts, email addresses and contact details of people who could verify her information, as well as her monthly expenses. It took six weeks before she got a response that her application was declined, but that she could appeal.

She said her appeal email then bounced back and after much frustration she took to Twitter to try and get a response from Mthethwa. Sixty days after her initial application, she finally got the correct email address to send her appeal. Two weeks later, she has still not gotten a response to her appeal.

Moses said she cannot pay any of her bills, including her rent, and is accumulating a mountain of debt.

Even though film companies are now allowed to work with a maximum crew of 50, it did not automatically mean there would be work for crew or actors. Moses, along with theatre producers and actors we spoke to, only expect to return to any form of work in 2021.

“Some artists I know can’t get out of bed,” she said, recounting an incident where at 2am she had to counsel a fellow artist who was considering suicide.

Meanwhile, the Theatre Benevolent Fund, established to assist aged or infirm theatre practitioners, has been doing what they can to bridge the gap. In a statement released in May, the Fund said it had paid out R401,000 by way of “about 800 food vouchers” to theatre practitioners after receiving R250,000 from a private donor and R151,000 from other donors. However, the Fund has had to close its relief fund and has welcomed independent auditing of their relief efforts.

While the disbursement of funds to 488 artists is welcomed, numerous questions about transparency remain, among them the tenders awarded to companies to run live streaming of artists’ work on digital platforms.

Questions sent to the ministerial spokesperson, department spokesperson, and chief director of communications and marketing on the evening of 25 May, were not answered by the time of publication on Friday 29 May.

Previous:  Is it wise to restart school on Monday?