Covid-19: Night vigil in support of principal who refused to open his school 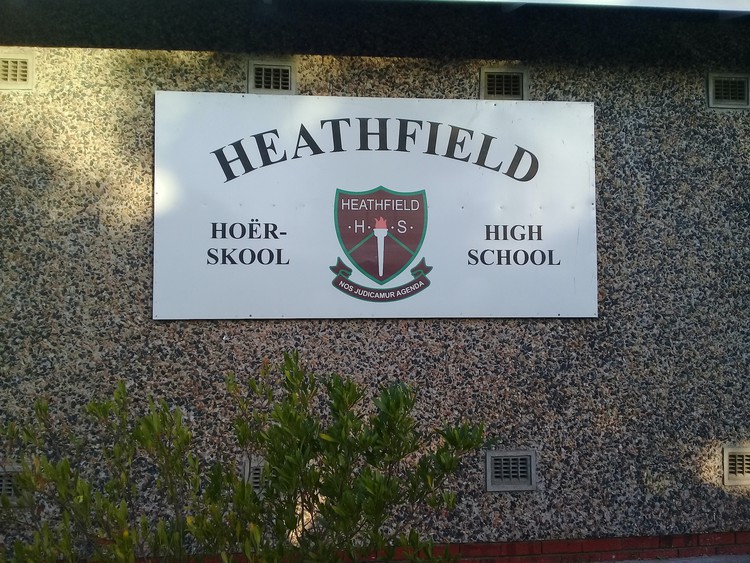 Heathfield High School principal Wesley Neumann is facing disciplinary charges after refusing to open the school at the height of the Covid-19 pandemic. Photo: Marecia Damons

About 70 parents, teachers, learners, and community members gathered at Heathfield High School in Cape Town on Wednesday night to support the principal, who faces disciplinary action after refusing to open the school during the Covid-19 pandemic peak.

In June 2020, the principal, Wesley Neumann, and other high school and primary school principals wrote an open letter to President Cyril Ramaphosa and cabinet members requesting that schools be closed.

According to the Western Cape Education Department (WCED), teachers and grade 12 learners at Heathfield High School were required to return to school on 1 June 2020.

When Neumann refused to allow staff and learners back to school, the WCED scheduled a disciplinary hearing for 7 October 2020.

He approached the Labour Court to stop his disciplinary hearing, and the matter was postponed. On 2 November 2020, the WCED reported that the Labour Court had ruled in favour of the Department by striking Neumann’s interdict application off the roll with costs.

WCED spokesperson Bronagh Hammond told GroundUp: “Various officials engaged with Mr Neumann attempting to persuade him to reopen the school, or keep it open for those learners that, according to National Directions, were required to attend school.”

“Mr Neumann continued to actively participate in a campaign against the reopening of schools,” she said.

Neumann is facing six charges, including that of failing to carry out a lawful instruction of the employer, committing misconduct by encouraging personnel not to report for duty and discouraging the attendance of learners, and prejudicing the administration, discipline or efficiency of the WCED.

Former Trafalgar High School principal Nadeem Hendricks, who attended the vigil, said the Department’s actions were an effort to discourage communities and schools from contesting its future decisions.

“Wesley Neumann didn’t have an agenda, he had compassion. He cared for his community, and his community demanded of him to extend that care. He made some sacrifices in order to protect their children, and here he stands persecuted. How unjust can that be?” said Hendricks.

Convenor of the civil society group South Africa First Forum, Rod Solomons, said if Neumann was dismissed or received a heavy sanction, “we will mobilise whatever resources we can to support him and Heathfield High in asserting their democratic rights”.

Brian Isaacs, former principal at South Peninsula High School, said citizens had the right to question the government and its decisions. Isaacs was dismissed as principal in 2016 following charges of misconduct.

“I stood for what I believed in. I wasn’t going to bow down to people who have no interest in the education of the children,” he said.

“Mr Neumann, together with the school governing body and the Heathfield community, stood firm. We must prevent our teachers from being bullied by the government in the Western Cape.”

Joshua Isaacs, a grade 11 learner at Heathfield High, said Neumann “made it his life’s duty” to ensure that every learner’s right to standard and quality education was “both recognised and fulfilled”.

“I have seen the positive changes to our school since I started here in grade 8. That is only because of the hard work, dedication and persistence of our principal,” he said.

“The WCED will let the relevant processes run so as to enable a presiding officer to decide on the merits of the matter, based on the facts and the law in this regard,” said Hammond.

The disciplinary hearing is scheduled for 3, 4 and 7 December 2020.