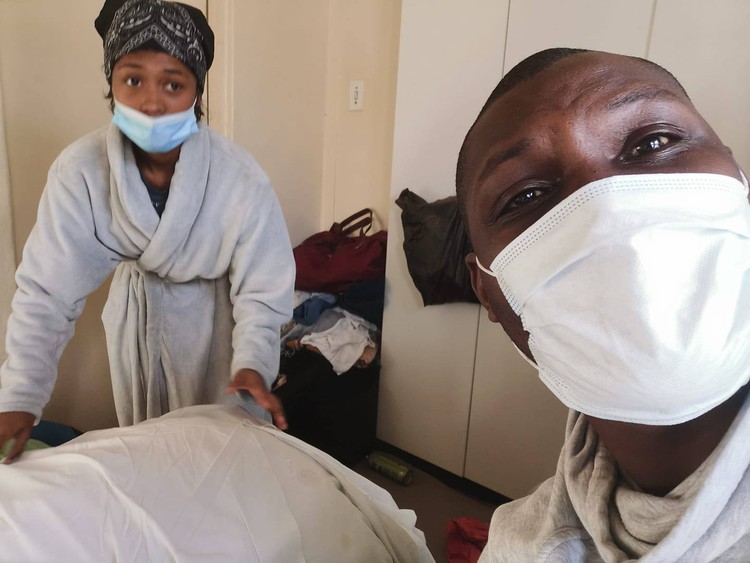 Six members of the Wyngaardt family entered quarantine at the Lagoon Beach Hotel in Milnerton on Friday 12 June. Woodstock residents Jade and George Wyngaardt and their children, five-year-old Israel, four-year-old Kairo, and three-year-old twins Kenya and Judah, recovered from Covid-19 at the seafront hotel-turned-quarantine site. They were discharged on Tuesday 23 June, after 12 days at the facility.

Like many in Woodstock, the Wyngaardts are a multi-generational household, and they share their house with George’s parents, Peter and Nicky Wyngaardt. Both George’s parents are cancer survivors, and have other chronic conditions.

Jade was the first in the family to begin to feel ill, on Saturday 6 June. She is a former breast cancer patient, who was treated for cancer while pregnant with the twins in 2017. She is in remission, but she is also more vulnerable than most to sickness, after undergoing chemotherapy and a double mastectomy.

Jade’s symptoms were very mild initially, and she continued to work through the discomfort. She and George run an internet services and marketing company, Click Africa Digital, which has largely served small- and micro-businesses.

Late on a Tuesday evening, while her family slept, Jade was putting the final touches to a work project. As she began to wrap up for the evening, her symptoms took hold - it was “like going from 0-100”, she told GroundUp. On the morning of Wednesday 8 June, George woke to find Jade unable to move, with a severe headache, body pains and vomiting. Jade told GroundUp that the pain she experienced between Tuesday evening and Friday surpassed the pain of her chemotherapy, surgeries, and natural childbirth.

George tried to arrange a doctor’s visit for Jade, but none would see Jade. Instead, she was referred for testing. They were offered a free test at Dischem the following day, but decided Jade could not wait and they paid R1,800 for a Pathcare test.

While they waited for the test results, they remained at home.

On Thursday, her test came back positive. George called the Coronavirus hotline, which is run by the Western Cape Department of Health. He and Jade spoke to the doctors manning the line. Jade initially thought that she would need to be hospitalised, but she did not have respiratory symptoms. After hearing about the wider circumstances of the family, the doctor determined that the best course of action would be to move them from Woodstock to a quarantine facility the following day.

Jade and George were both surprised by this decision. They struggled to find out more about what this would mean. Eventually, Jade stumbled on an online document of Health Department regulations and protocols for quarantine sites, which set their minds at ease.

On Friday 12 June, a Red-Dot taxi, a minibus taxi contracted by the government, arrived to pick up Jade, George and their children. They were separated from the driver, and were directed to the back of the taxi, which was covered with plastic.

They arrived at the Lagoon Beach hotel after a 15-minute drive, and were taken to their rooms. Jade and George had a bedroom, while their children shared a bedroom.

They were pleasantly surprised by their accommodation and the treatment they received - but told GroundUp that this was no family holiday, “It’s a fancy hotel meets prison”. They had all the vital amenities, including internet access and a television in the room. During the day, Jade and George would work on their laptops, and their children would mostly play with their parents’ phones.

Jade’s intense headache symptoms began to recede over the first weekend at the facility.

Staff at the facility wear head-to-toe protective equipment. Meals for the family were delivered to the door, wrapped in plastic, three times a day. They say the food was good, considering that it was made in bulk, and they appreciated the small touches, like desserts. A staff member would knock and leave, and Jade or George would collect the food wearing masks. Their rubbish was collected daily, and they were instructed to wrap everything in plastic bags.

There is no housekeeping service, and the family was responsible for washing and drying their own clothes and sheets. There is no room service, but the people working at the facility were always available by phone if there was urgent need. 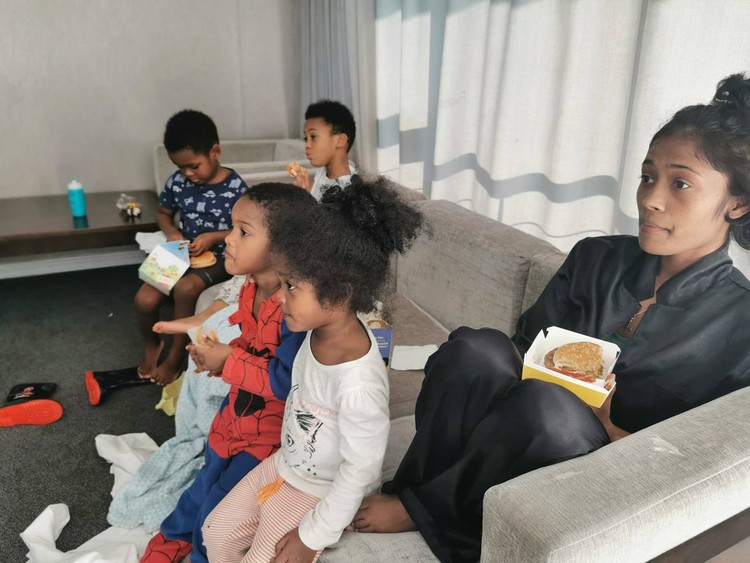 Each morning, a healthcare worker checked in on the family, taking note of their condition and how their symptoms were progressing. While Jade did not at first have respiratory symptoms, as the week went on she developed the notoriously painful Covid-19 cough.

George’s symptoms only began to affect him after he arrived. He experienced intense bloating, fever, and shivers. He has been keeping in touch with a friend who also has Covid-19 to compare symptoms. They think that their children all had Covid-19 too, as they have had light coughs and fevers.

Meanwhile, George’s parents have come down with Covid-19. George says so far that they do not seem to be too badly affected.

The Wyngaardts told GroundUp that when they first arrived, there seemed to be very few people around, but as the week progressed they saw more people on the balconies at the site.

No alcohol is permitted at the site. Family and friends are allowed to drop off packages, but staff members “treat these like bombs”. The staff unpack them to check for items like alcohol, and deliver them carefully to the rooms.

The Wyngaardt family were set to leave after two weeks, on Friday 26 June, but were deemed not to be infectious and discharged on Tuesday 23 June. George said that he is feeling better, but still experiences tightness in his chest, and he and Jade have lower-than-usual energy. He says that both of his parents have fully recovered.

The Wyngaardts told GroundUp that they are glad to be back in the familiar bounds of home and their neighbourhood. They are eager to get back to building their business, and to recapture some of the momentum that they lost.