“This job gave me a sense of independence and pride” 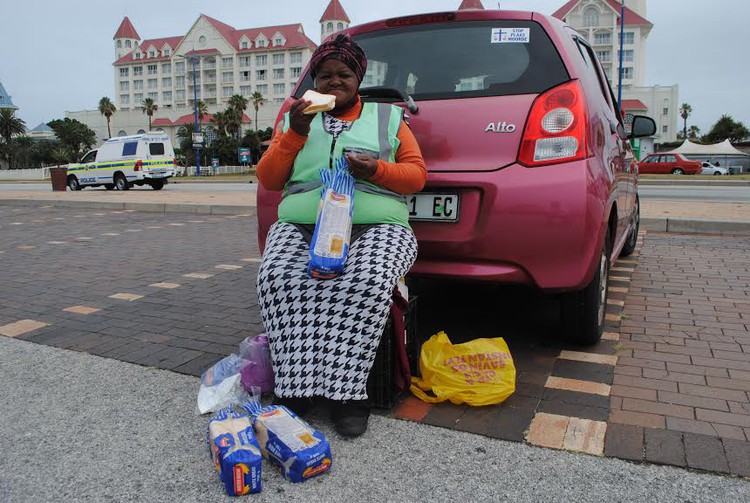 Car guard Buyelwa Shwaba eats some bread given to her by a motorist at Hobbie Beach. She says there is no food at home. Photo: Mkhuseli Sizani

Car guards in Nelson Mandela Bay are feeling the pinch after the closure of the beaches to prevent the spread of Covid-19.

Two guards told GroundUp that for more than 20 years they had been getting good money from motorists and tourists visiting the popular Hobbie Beach and Boardwalk Casino in Summerstrand, Port Elizabeth. But since the closure of the beaches they have been battling and are grateful even for a slice of bread.

On Sunday afternoon we caught up with two car guards who looked desperate, asking motorists to give them anything just to be able to feed their families.

Buyelwa Shwaba 52 from Motherwell NU 12 said, “I became a car guard while I was umakoti (a new bride) more than 30 years ago. When I started, I wanted to feed my daughter and son because we were depending on my mother-in-law’s social grant. This job gave me a sense of independence and pride.”

“All these years I never felt the pain of being unemployed because I was able to put bread on the table for my family. I was also able to buy school uniforms for my children and join a stokvel for R500 a week with other car guards.”

She said during the festive season all the guards were making good money.

“On a good day from 15 December until the days when workers went back to work I was making between R400 and R500 a day. But now I only make R70 a day. Tourists are no longer coming and some of the motorists don’t even want us to get close to their vehicles for fear of this virus. When I collect the money I use the lid of an ice cream container for the motorist to put the tip on it.”

“I appreciate everything the motorists give to me. Whether it is bread or leftovers, because there is no food at home,” Shwaba said.

She spends R64 on a return taxi fare to get to the spot.

Her colleague Sisana Mjoli, 48, from Rolihlahla township has been a car guard for 23 years.

“After I failed matric in 1998 I decided to be a car guard because it was difficult to find a job. I am a mother of four. These tips have been good because I was able to take care of my children. I would buy food, school uniforms, stationery, furniture, funeral policies and also join stokvels with other guards.

Mjoli said if the beaches stayed closed her funeral policies would lapse.

“This closure was a final nail in our coffin. Since level 5 we have been battling to make a living and we have no support from the government,” she said. 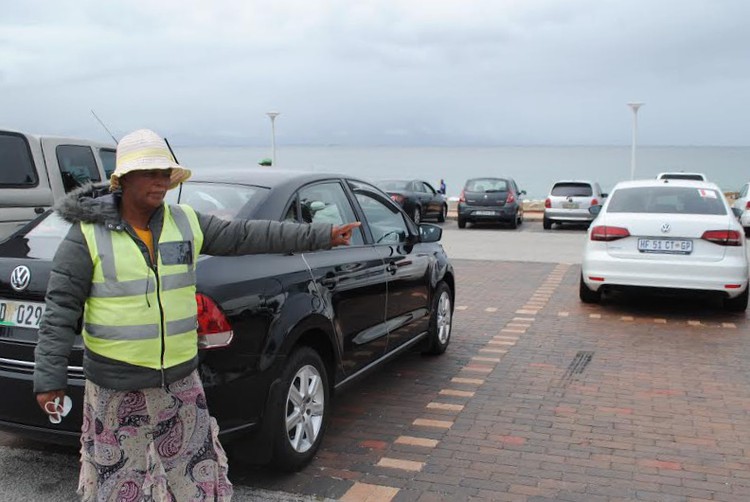 Sisana Mjoli from Rolihlahla township has been a car guard for 23 years but now she is battling to make ends meet. Photo: Mkhuseli Sizani