Evictees say they were out of options 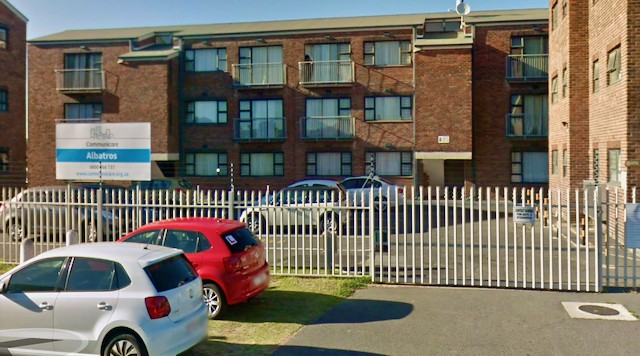 The Cape High Court has granted social housing company Communicare an eviction order to remove people who have been illegally occupying its Albatros rental complex in Thornton for over a year. Photo: Google Maps

The Cape High Court has granted social housing company Communicare an eviction order to remove people who have been illegally occupying units in its Albatros rental complex in Thornton for over a year.

For the past two years, a group of people have been cutting locks and breaking into Communicare premises in an attempt to hijack buildings. Early last year, unarmed security guards were forced at gunpoint to hand over keys, while others have been attacked at various premises.

The incidents were reported to police and charges of burglary and trespassing were brought against the illegal occupants. In March 2019, the High Court interdicted the people involved from unlawfully occupying more units and from inciting others to do so, according to a statement issued by the company.

In August 2019, 11 units were illegally occupied at the 81-unit Albatros rental complex. According to Communicare’s Megan Lennert, these units were undergoing repairs to be leased again.

Lennert said the same group was involved in hijacking three apartments at the Dennehof Complex in Thornton two days later, and occupying apartments and houses in Ruyterwacht. The group had also repeatedly made illegal connections to water and electricity services, and has not paid rent.

Lennert said initially 50 people were moving between three or four properties trying to occupy units undergoing repairs or being marketed for letting.

The company tried to mediate with the occupiers but was unsuccessful. It applied to the High Court in September 2019 for an order to have the occupiers removed from Albatros.

The case was eventually heard on 30 October 2020. The court issued an eviction order giving the occupiers until 14 December to vacate.

“We are pleased that the court could see that while the ringleaders claim to advocate for tenants’ rights, their actions tell a different story. They have acted both fraudulently and violently without cause for either,” said Communicare CEO Anthea Houston.

According to the statement, “legitimate tenants are being pressured to support the hijackers and to boycott payment of their rentals and services”.

He said vacant units had posed a safety risk. “There was no security at the time … The flat next to us was vacant for about two years. We became worried because the vagrants started coming in. They started taking water. They came in and slept here.”

Petersen says they complained to Communicare, but to no avail.

“As a result, the families here decided that we are going to occupy these places because we don’t know what to do anymore. There are people in need of housing.”

According to Petersen, the families occupying the spaces are “willing to pay and get into a lease agreement with Communicare even though they aren’t legitimate”. He says they attempted to negotiate with the company.

“Communicare employed two companies. These people were fully armed, dressed in black with no name badges. They came and ripped the doors off with crowbars. They did this to the doors of the tenants. We managed to stop it halfway to ask them where’s their court order. But they turned it around to say that we hijacked the place,” said Petersen.

He denied that residents illegally collect ‘rent’. “We know that we don’t own the property. We are fundraising and collecting money … towards our legal fees,” he said.

“Instead of resolving these issues at a community level, they are running to the high court with any matter and wasting money on the evictions,” said Petersen.

Meanwhile, in a statement the Department of Human Settlements said the Western Cape Rental Housing Tribunal quarterly report (1 July – 30 September) showed that the number of Communicare matters finalised or closed increased from 156 at the end of June to 411 at the end of September.

It said 307 Communicare cases are scheduled to be finalised through hearings, while 57 new Communicare complaints are still to be investigated.

CORRECTION: The original headline on this article took sides in this conflict which we should not have done in a news report. Our apologies.

Next:  Doctor accused of ramming car into protesting healthcare workers outside clinic

As explained we were held *Hostage* and we showed the physical evidence. I'm sure Communicare has no evidence that we Hijacked the buildings and it is sad that in today's modern media era,your publication rely on fake news.

This Heading is an attack and insult on our Tenant Beneficiaries who are seeking a decent home which is a Right in terms of our Country's constitution and all homeless persons who the system failed including landlords like Communicare and thru greed, Social Housing Land Lord's are economically exploiting Tenants.This heading has now stigmatized our struggle as being _criminal Hijackers_ while you not exposing the blue collar crime within Communicare and the cruel and inhumane court application by Communicare to evict homeless people and to crimanalize them.

It is obvious that your publication is against homeless people seeking a decent home.

Apology for headline that took sides

Our original headline was biased. Our apologies. It was also not the reporter's choice of headline; the editor takes full responsibility for it.