Volunteers gets their hands dirty to rescue endangered plants

“We should look like Namaqualand in the spring but because everything has been destroyed, it isn’t like that anymore.” 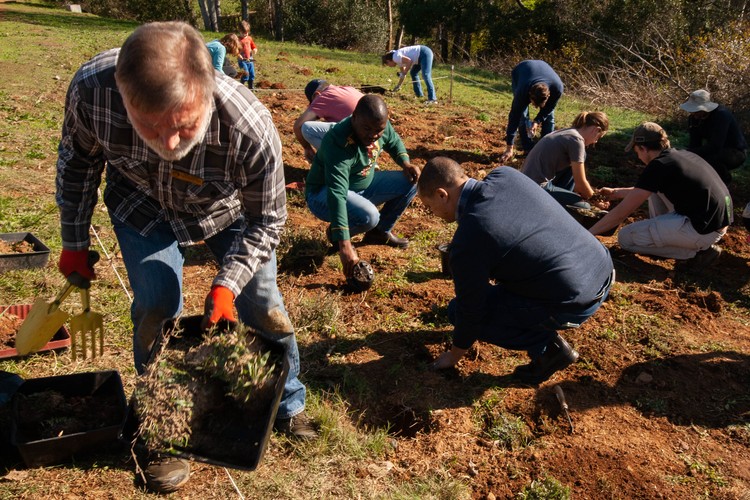 Volunteers came together in Bellville to replant critically endangered Renosterveld plants which they rescued from the side of a busy road which is to be expanded soon. Photo: Liezl Human

Volunteers and conservation activists got down in the dirt to rescue about 300 critically endangered Renosterveld plants from the side of Jip De Jager road in Bellville, Cape Town.

According to the City of Cape Town, there are only about 1% of these keystone species of the Renosterveld currently in conservation areas.

Following the news that Jip De Jager road would be expanded, the group called Tygerberg Renosterveld Community, asked the City for permission to remove what was left of the Renosterveld next to the road and rehabilitate it.

“We basically have nothing left. It’s important to save every little bit we have,” said André Venter of the Tygerberg Renosterveld Community.

On Friday, we joined the group as they meticulously replanted the plants in the nearby Majik Forest as part of a community-driven urban conservation project. The plants removed were small, shrub-like and unassuming. But in spring they will grow colourful flowers.

Over three days, plant beds were prepared, the plants were removed from the roadside, and then replanted. About 50 people from the community and the City were involved in the initiative.

Zitobile Sikova, groundskeeper at the Majik Forest, told GroundUp that he was thrilled to see the group’s conservation effort.

Ashton Mouton of the City’s Recreation and Parks Department, said that there is only about 1% of the Renosterveld plants currently in conservation areas. He explained that Renosterveld are critical to the ecosystem.

Venter said that urban areas currently housed many isolated forests and parks and that it is difficult for wildlife like insects and birds to navigate safely. Increasing the biodiversity in communities will help, for example, birds to extend their range, he said.

“We should look like Namaqualand in the spring but because everything has been destroyed, it isn’t like that anymore. The idea is to bring some of it back,” he said.

Venter believes the initiative also brought a sense of community among volunteers who participated.

Previous:  The justice system is showing signs of rot