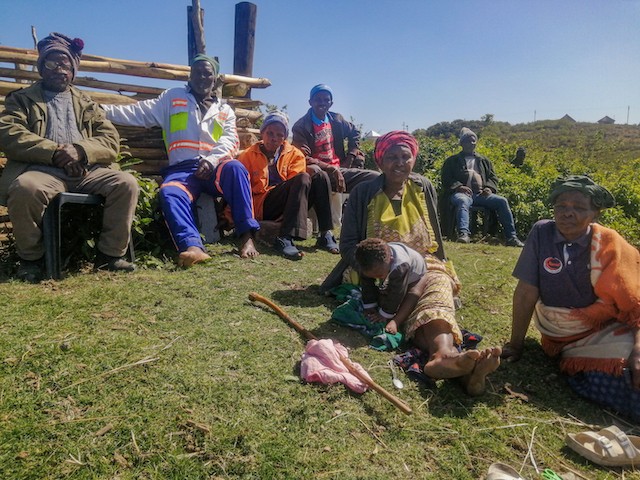 Beneficiaries of the older person’s grant in Xhora Mouth on the Wild Coast, say that since their local South African Social Security Agency (SASSA) pay point was shut down at short notice, they have had to pay high costs to receive their monthly pension.

Pensioners in the area, some of whom are retired mine workers, support large families with the monthly R1,980 grant. The area has very high unemployment and the lowest income per head in the country.

Previously, pensioners from Nqileni Village could receive their pension in cash at a pay point in a field which they could walk to in the village. But this service was stopped in 2019.

Since then, they have had to travel about ten kilometres to Mthonjeni to receive their grants. But on 16 August, when about 50 people pitched up at the Mthonjeni pay point, they found it had been closed without notice, according to pensioner Timothy Dodwana.

He said he called traditional leader Nosintu Gwenbindlala, who made arrangements for the pensioners to be driven to the next closest pay point in Thafalehashe, about 15km away.

Gwenbindlala told GroundUp that when she called SASSA to enquire about the sudden closure, the agency was unable to offer a satisfactory answer.

During a meeting with SASSA on 8 September, Gwenbindlala was informed that all pay points without a hall or building and/or with 100 or fewer beneficiaries were being closed.

After Gwenbindlala explained the challenges faced by the pensioners, SASSA agreed to delay the closure of the Mthonjeni pay point until the end of this year, so that there could be proper consultation.

“We have undertaken this process for the best interest of our beneficiaries considering the challenges faced by SAPO [South African Post Office], which may lead to unavailability of cash payment services at pay points,” said Nondwayi-Mayaba.

Alternative payment methods include withdrawals from banks, ATMs, or shops, such as Shoprite and Boxer. SASSA says all beneficiaries are encouraged to move to digital options and to use public transport to access their grants.

But pensioners GroundUp spoke to said they prefer to receive their pensions in person and in cash, closer to where they live.

The three-to-four-hour round trip from Xhora Mouth to Elliotdale, the closest town with shops offering digital payment options, costs up to R120. Withdrawal fees can be as high as R30 at ATMs and certain shops, the pensioners say. 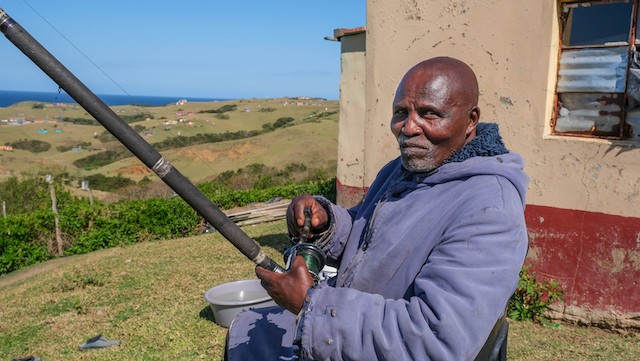 Timothy Dodwana supports his family by fishing from the shore, selling the fish locally and to tourists. Photo: Daniel Steyn

Dodwana is using his pension to support a family of eight. He is currently saving up R1,100 for his two grandchildren to attend a school camp during the school holidays. He supports his family with fish he catches from the shore, which he sells to locals and tourists, but the pension is his main income.

“The more than R100 I spend to receive the grant is a great loss for me, because I could have bought a bag of flour or mielie-meal for my family,” said Dodwana.

Nothobile Vakalelwa, 70, from Zwelitsha village, who lives with her family of eight, says that the local pay point was safe and convenient. She struggles with digital technology and she does not want her children to withdraw the money for her, as she thinks they are likely to spend the money in town.

The situation also affects people collecting other social grants. Kayakazi Nyirana receives a child support grant for her three children. Her local pay point in Mkhathazo has been closed since the outbreak of Covid-19. She says that the taxi to Thafalehashe costs R60, and R40 is deducted when she withdraws her money at the shop.

Alexa Lane, regional manager for Black Sash Eastern Cape operations, says “SASSA has not upheld its mandate to deliver the right social grant to the right person at the right place and time”.

“The reality in rural communities is the digitisation move by SASSA has left many vulnerable,” said Lane. She also expressed concern over the closure of pay points without contingency plans.

“It would not be the first incident where a pay point has been closed without communication. It happened recently in Khayelitsha and [if] in an urban area like that, the impact was devastating, in a rural area it must be catastrophic,” said Lane. 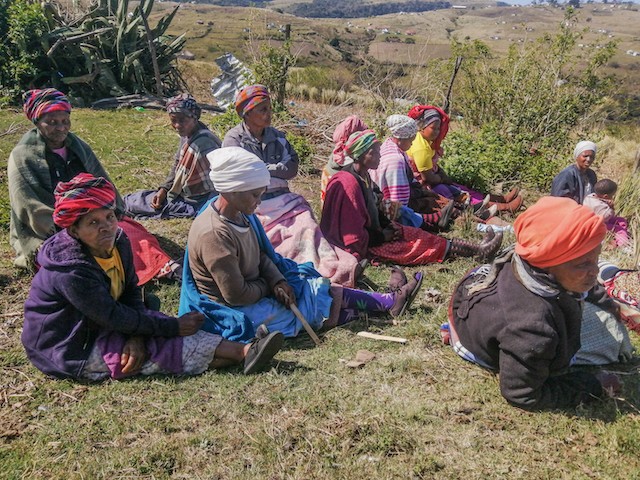 Pensioners from Xhora Mouth pay up to R150 including withdrawal fees to get their grant. Photo: Mkhuseli Sizani

Next:  Zimbabweans trying to leave South Africa turned back at Beitbridge border