“We cannot blame homelessness on the people experiencing it” says academic 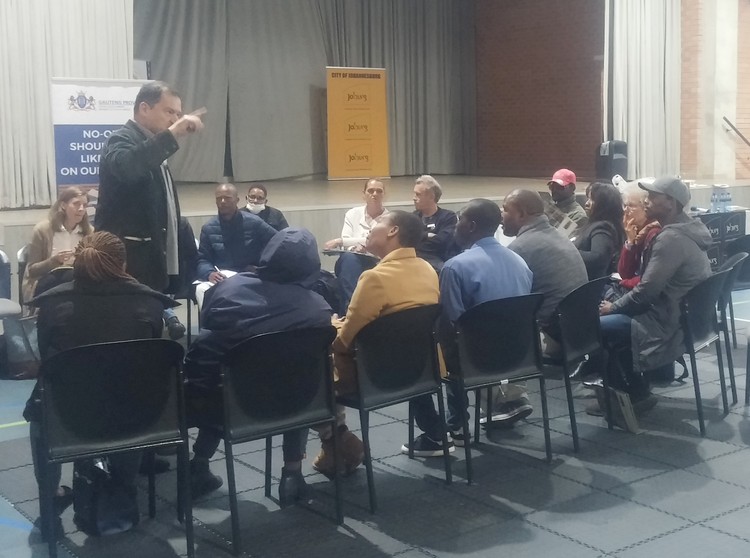 David van Niekerk of the Johannesburg Inner City Partnership addresses a group of delegates at a two-day meeting on homelessness in Brixton. Photo: Chris Gilili

About 200 people met on Thursday at the Brixton Multipurpose Centre for the first day of the National Conversation about Homelessness.

There were representatives from the City of Johannesburg, the Gauteng provincial government and non-governmental organisations. There were also homeless people.

The event is hosted by the Johannesburg Homelessness Network (JHN) and supported by the City. It ends on Friday.

Matome Makgoba of the City of Johannesburg explained that the City “cannot do it alone”. He appealed for support to “assist homeless people to move to the next stage of their lives”.

Gauteng MEC for Social Development Mbali Hlophe told the audience that the problem was that homeless people have always been treated as invisible in society. “No one wants to see homeless people. Even when they approach our cars at the robot, one will close one’s window. We must acknowledge that they exist and we cannot avoid that.”

She spoke about the need to address substance abuse by homeless people. She also said food security is a priority for addressing homelessness. She said the provincial government was trying to introduce work for homeless people in farming and construction.

But some expressed scepticism.

Francus Palm of the Ekurhuleni Homeless Forum raised concerns about the government’s approach. He said there were no performance indicators for dealing with homelessness for any specific department.

“There is no single person to handle homelessness related issues,” said Palm. He singled out Home Affairs for its failure to be available to meet.

Professor Stephan De Beer of the University of Pretoria said that instead of blaming homelessness on the people experiencing it, we should see it as a failure of the state.

Last month, GroundUp reported that the City of Johannesburg estimates that it has about 15,000 homeless people. There are only four government run homeless shelters though.

Chairperson of the National Homelessness Network, Chris Mund, said they have identified unused buildings in Johannesburg which could be used as shelters.

Mayco Member for Health and Social Development, Ronald Harris, appeared to agree. “We need to confront the system that makes it hard for people to access City-owned buildings.”

Harris said that the City will develop plans to better manage homelessness. “As soon as next week, we will be going to the streets of Johannesburg talking to homeless people, asking them how they ended up in the streets, and how we can help them.”

Next:  Water shortage in Kariega has become extremely serious after a pipe burst