“Life is hell on the streets. It’s the survival of the fittest” 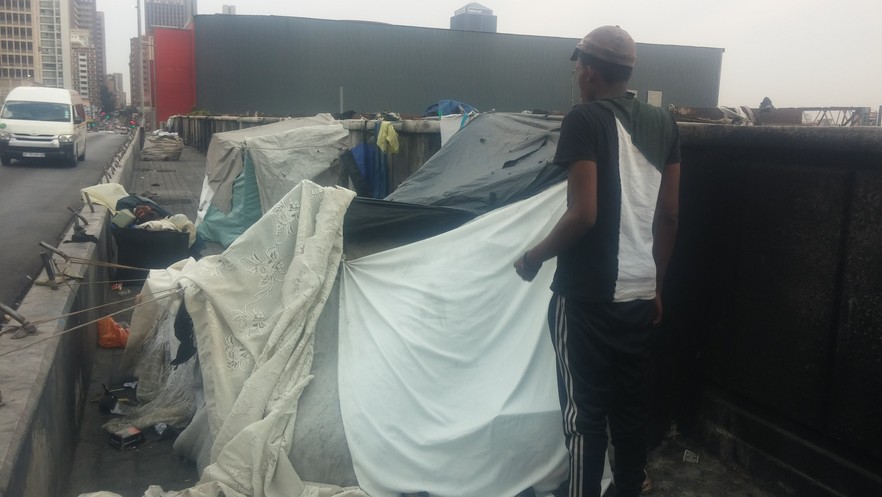 Thabang Moagi lives on the bridge in Harrison Street, Braamfontein. He survives by guarding cars at night and offering to wash people’s cars. Photos: Chris Gilili

With South Africa’s economy staggering, and two in every five adults unemployed, “villages” of homeless people are springing up in South Africa’s cities as increasing numbers of people find themselves on the street. In our series on homelessness, GroundUp looks at how they are managing to get by.

Zamokuhle Sangweni, 31, from KwaZulu-Natal, is part of a group of people who have built shelters against the wall of the Methodist Church building on Rissik Street in Johannesburg city centre. She survives on handouts of food from strangers and would love to find a place in a shelter “so that I can get my life together”.

But the City of Johannesburg, with at least 15,000 homeless people, according to communications officer Ayanda Radebe, runs only three shelters. (The City says it’s not possible to scientifically estimate the number of homeless people, so the 15,000 figure is a rough number.) The biggest are in the city centre, with a combined capacity of 650. There is a fourth shelter funded by the Gauteng government. There are also other places for homeless people run by churches and non-government organisations, but there is undoubtedly an acute shortage of shelter beds.

One of the City shelters is in Kotze Street in Hillbrow, very close to Constitution Hill. Homeless people GroundUp interviewed said the R8 nightly fee was hard to pay.

“I have been on the streets for more than ten years now,” said Sangweni. “I have even developed sicknesses I don’t know about. I have swollen legs and I am taking medication. It is too much, and I don’t know where my next meal will come from.” 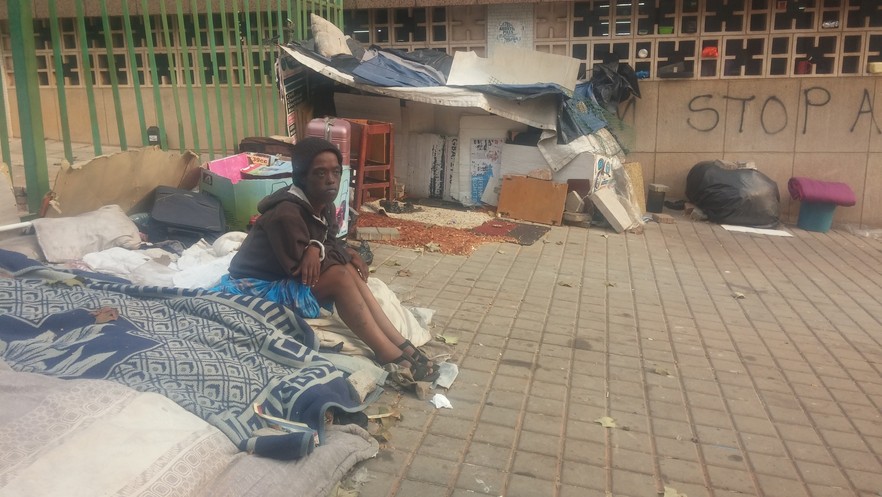 Zamokuhle Sangweni survives on handouts of food from strangers.

She used to rent a place in a shelter in Marshalltown with friends. They used to pay R700 a month. “There were three of us sharing a room. We took odd jobs here and there to pay our way. However life took a turn for the worse, we could not pay anymore, and we got kicked out of the shelter. We ended up sleeping on the streets, ” said Sangweni.

In its response to our questions the City of Johannesburg described a conflict that is happening in cities across the country.

Bongani Fatyi, from the Salvation Army church in Braamfontein, which runs a soup kitchen and offers shelter to vulnerable women and children, said the City should do much more to address homelessness. He said the pandemic had contributed to the rise of homelessness.

Radebe agreed that the pandemic had increased the number of homeless people.

Thandiwe Buthelezi, 35, from Soweto, lives in a small park behind the Bree Street taxi rank in the city centre.

“I initially stayed in Rissik Street, but we were chased away from that spot, because they said they were cleaning up the area and we brought filth. I am the last born and the only girl at home and I grew up among five brothers. My mother was not always there because of work, I was not well treated, and I was even raped by someone close to our family,” says Buthelezi. 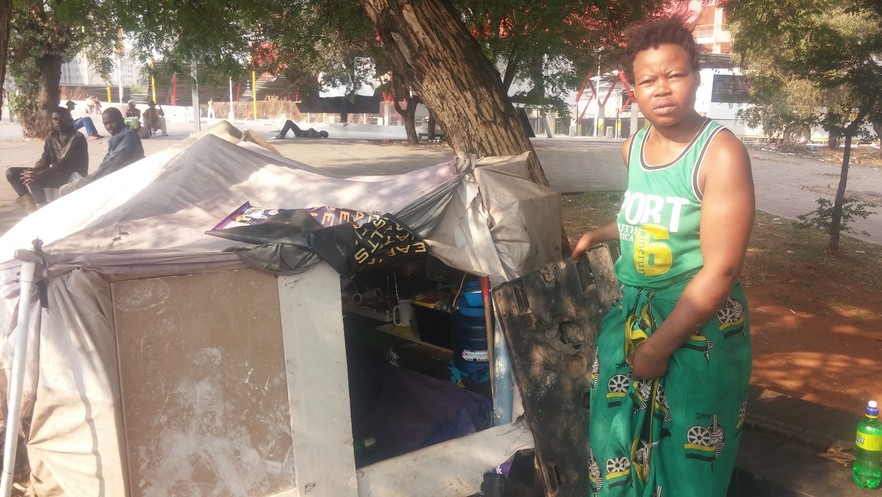 Thandiwe Buthelezi from Soweto lives in a small park behind the Bree Street taxi rank in the city centre. Buthelezi says she has tried to get into a shelter but cannot afford the fee.

She moved to Johannesburg with a friend in 2013.

“Initially we stayed in a small room in Hillbrow that we shared and rented with two others. But as time went on, things got sour for us. We could not make ends meet and that is how we found ourselves living on the streets. It is survival of the fittest out here, ” said Buthelezi.

She has made a shelter from rubble, cloth, plastic and old blankets.

“At least we have not experienced any cold weather recently. In winter, I felt like I would die at any moment. Life is hell here. Last week, a young man died at night, while we watched and could not help him. Even the friend of mine I came with from Soweto passed away in February.”

Buthelezi says she has tried to get into a shelter but cannot afford the fee. She has does sex work to make money. “No one trusts us enough to even give us piece jobs.”

More than anything she would like to be reunited with her family, especially the ten-year-old son she left at home. She weeps when she talks about him. “The fact that I have never been a parent to my son and cannot see him, is eating me away everyday.” 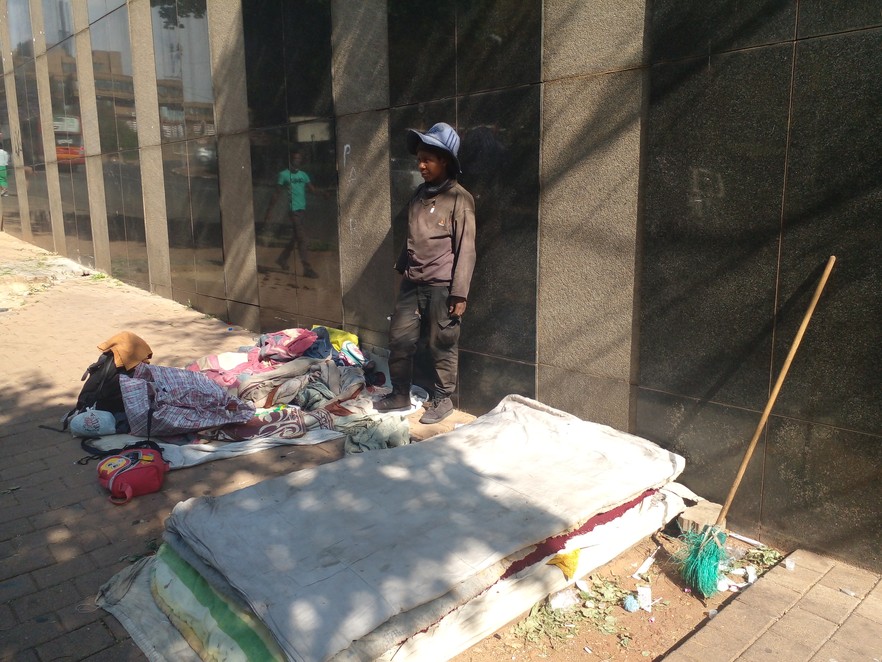 Sipho Mthimkhulu from the Vaal sleeps on the pavement near Cosatu House in Braamfontein. He has been living on the streets of Johannesburg for more than five years.

Thabang Moagi, 25, lives on the bridge in Harrison Street, Braamfontein, in a shelter made from plastic and old sacks which he shares with friends. “I was arrested for a robbery in Pretoria. I spent a year in prison. After prison, I ended up on the streets.”

“We survive by guarding cars at night and also offering to wash people’s cars.”

He wants to go back home but says: “I need to change first”. “Drugs are my challenge,” he says.

Moagi spent six months in rehab but when he left, he fell back into drug use, he says.

“There is also a growing need for shelters for families,” said Leona Pienaar, chief executive of faith-based organisation Mould Empower Serve (MES), which works with the City . “We now often get requests from families living in cars who have lost their homes due to unemployment.”

Next:  “Bring back the money”: picketers shout at suspended SJC activist outside court

Previous:  “Government has forgotten the July unrest. You can’t have millions of people going hungry.”