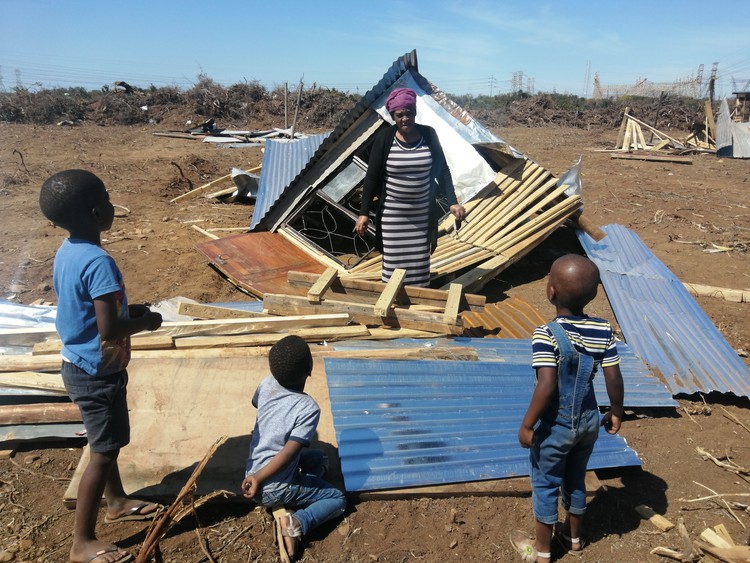 Nokuzola Ngquwe has been left homeless with her grandchildren after their shack which was built on vacant land near the Bayland informal settlement in Port Elizabeth was demolished on Wednesday. Photo: Mkhuseli Sizani

The shacks of about 80 people who occupied land near the Bayland informal settlement in Port Elizabeth were demolished on Wednesday morning by the Nelson Mandela Bay Municipality. The land where the group erected the 20 shacks last week was demarcated for the KwaMagxaki Initiation School.

A heavy police presence that included public order police, metro police and some Land and Invasion officials monitored the area while the homes were dismantled. Some former residents started burning tyres on R75 Uitenhage Road. They believe the municipality’s move to evict them is illegal.

Bayland was started in 2017 by backyard dwellers from townships across Nelson Mandela Bay. In 2018 the former mayor put a ban on evictions in the settlement. The area grew rapidly and currently has over 2,000 shacks.

Resident Nokuzola Ngquwe, 62, had been living in Bayland since 2018. She said she decided to move her shack to the piece of open land on the other side of the road to be closer to the bus stop because she struggles to walk.

Ngquwe said she had been on the housing waiting list since 1996 and that the slow service delivery of RDP houses also prompted her to join the occupation.

“The municipal officials are keeping on telling me to be patient because there is a huge housing backlog. Now my shack is demolished. All these years I have been voting for a better life but nothing is happening,” she said.

“I am a pensioner and I spent about R3,000 on material to build this shack. This means I will die without a place that myself, children and grandchildren can call a home,” she said.

Nomalungelo Stempa, 56, has four children and was renting a shack for R800 in New Brighton before moving to Bayland two years ago. She also moved her home last week.

“This government is only nice to us when they want our votes. But they are cruel when we demand service delivery. They will never get our votes here. They failed to build us RDP houses and now they destroy our shacks,” she said.

Mamela Ndamase, municipal spokesperson, said the City officials’ job is to prevent land occupations and uphold the Unlawful Occupation of Land Act. “This stipulates how illegal invaders should be evicted when they steal land. No one is allowed to take the City’s land unlawfully and we urge residents to refrain from doing such.”