Since a fire in the early hours of Sunday morning destroyed about 120 homes and left 1,400 people homeless in Kosovo informal settlement, Philippi, residents have been rebuilding their shacks.

Akhona Jezile and Thandiswa Ngambu, two engineering students, have not been to college since Monday. “The college is aware that we are busy rebuilding our shack. Though we are short of about six bags of cement for the floor we are building the four walls and roofing will be done by the end of the day [Tuesday],” said Jezile.

Thembakazi Simolasi, who is 29 and unemployed, was helping her neighbours to rebuild. ”I am not sure when I will receive my own material. In the meantime, I decided to assist neighbours so that they in turn help me whenever my material is supplied.”

Simolasi said she was. waiting for the City of Cape Town to supply materials and was relying on the food brought by the South African Social Security Agency (SASSA) daily.

She said SASSA had brought blankets on Tuesday afternoon. 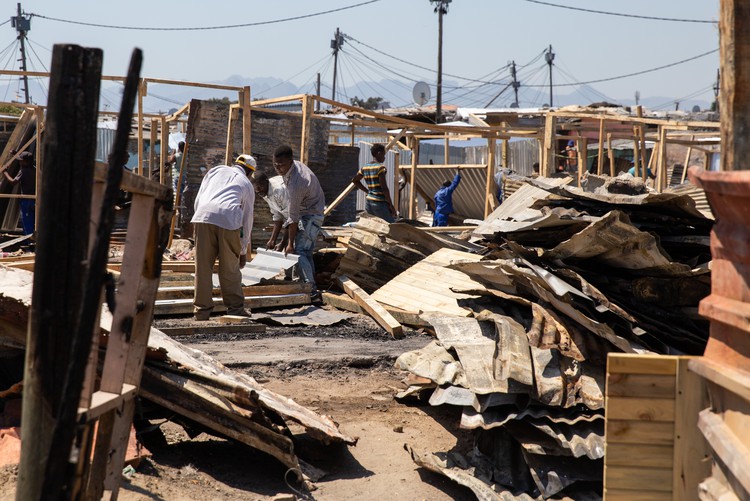 Residents clear debris and rebuild in Kosovo after the fire. Photo: Ashraf Hendricks

Some people are borrowing money from friends and relatives to buy building materials to supplement the kits provided by the City . Many say their shacks had two or three rooms and the material supplied by the City is not sufficient.

“We thank the City for supplying building material, but it is only for one room. Originally, my shack was divided into two rooms and I still want to maintain that size,” said Fezeka Feni.

Her brother lent her R570 to buy 25 planks and two packets of nails.

Feni and her family are currently staying with friends and hope to move back to their home soon.

The City said SASSA was the lead agency for humanitarian assistance.

Shivani Wahab, senior communications manager at SASSA, said, “We have been providing humanitarian relief … from the onset of the disasters over the weekend. Relief is provided in the form of hot meals, dignity packs and mattresses to those who were displaced.”

In a press release the City said “enhanced emergency fire kits are in the process of being issued to all affected”. The kits now “consist of 25 zinc sheets; 14 wooden poles which are fire-treated; three packets of nails; a door; door hinges; a window frame and a window”. It said 90% of the kits had been issued to residents in Kosovo.

“There has been an overwhelming response from residents to calls for donations to assist the fire-affected residents. There is still a need for household items such as blankets, bedding, curtains and clothing,” said Mayoral Committee Member for Area South, Councillor Eddie Andrews.

Donations of money can be made to the Mayoral Relief Fund (GroundUp has no responsibility for this account or how the funds are spent):
Bank: Nedbank
Account: 1158667043
Branch code: 198765
Ref: A009

Next:  R162-million housing project incomplete after over a decade