On Sunday morning over a hundred law enforcement officers took part in an operation on Greenmarket Square to remove the belongings of the refugees who are living outside the Central Methodist Mission, and usher them away from the area. This was an attempt by the City of Cape Town to end a nearly six-month long protest by the refugees, and it follows a court order that gave the City the go-ahead to enforce its bylaws that the protesters have been breaching.

“The City, supported by the South African Police Service and the Central City Improvement District moved into the space this morning in a bid to bring an end to what has been an untenable situation,” said a City statement. “We deployed a large number of Law Enforcement officers to prevent an outbreak of violence.”

When we arrived at the church at about 9:20am, tents, some of which were self made, mattresses, cooler boxes, crates and chairs could be seen strewn on the street alongside and opposite the church. Families and children sat around nervously as law enforcement moved in groups patrolling the area. Many of the officers were wearing blue latex gloves and surgical masks.

At least two trucks, one of which had a crane, were used to remove people’s belongings. There was some arguing, but many people moved off voluntarily. No arrests were made.

“We appeal to the refugees to return to the homes they vacated to join the initial occupation of St Georges Mall,” said the City’s statement.

“Some of the refugees have left Greenmarket Square. Enforcement agencies are monitoring locations to which people are moving and will act on these if necessary. The court order says refugees may not settle elsewhere in the CBD,” said the City. 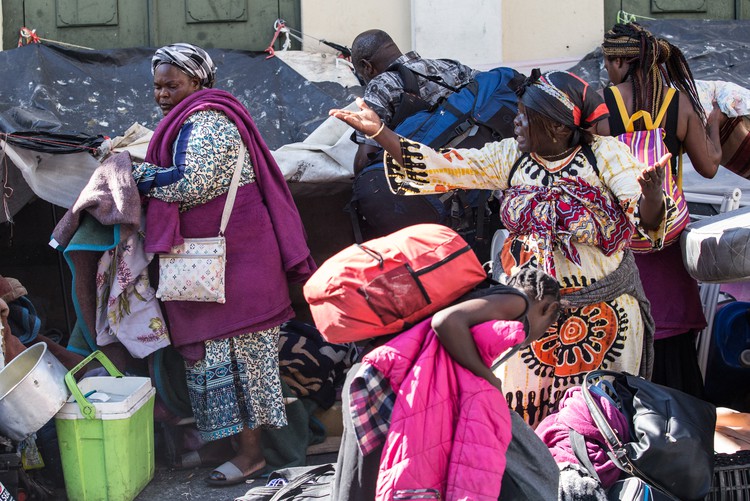 Some of the people who have been living on the square argued a bit with law enforcement but then moved off with their belongings. Photo: Ashraf Hendricks

How it got to this

In October 2018, hundreds of refugees began protesting outside the United Nations High Commissioner for Refugees (UNHCR) offices in St George’s Mall. They demanded to be resettled in a third country (i.e. not the countries they came from, nor South Africa) because of the xenophobic violence in South Africa. Weeks later they were removed in a chaotic operation. Many took refuge in the Central Methodist Mission on Greenmarket Square, but there were too many people to fit in the church, so many began living outside it. The population has fluctuated since then but several hundred people have been living on the square.

In February, the Cape High Court found the refugees to be in breach of the City’s bylaws and gave the City, the applicant in the case, the green light to take action (and in fact criticised the City for not having done so).

As Sunday’s operation proceeded, a number of signs were on tents and tied to fences criticising South Africa, the UNHCR and JP Smith, the Mayco Member responsible for law enforcement.

“You separate [divide] Africa,” said one of the refugees as tension mounted on Sunday morning. “This country is not safe … Where’s your Ubuntu.”

Another refugee said that he would rather go to Pollsmoor prison because it has accommodation.

As law-enforcement moved in to evict people, some resisted, but were quickly calmed and stepped aside.

The City’s statement said that it could not “allow the situation to carry on unchecked, as it has had a major impact on surrounding businesses, including the traders on Greenmarket Square”.

“Furthermore, we are not in a position to provide emergency shelter to the group, given the great need that exists among South Africans, not to mention the precedent that it would set,” said the statement. 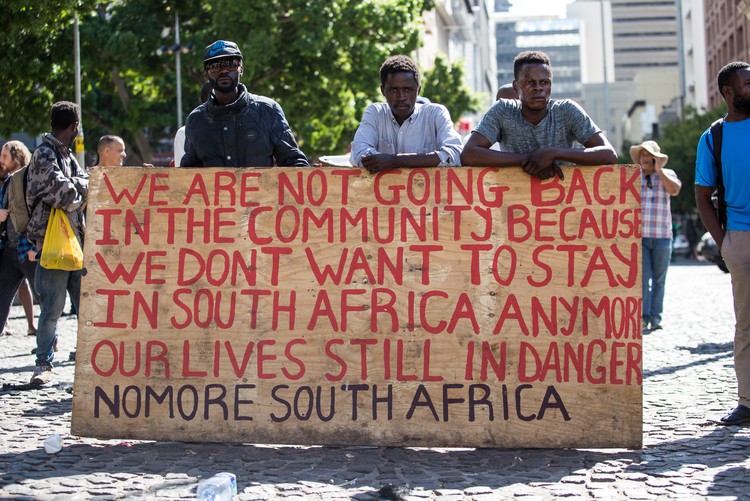 Some continued to protest as the operation proceeded. Photo: Ashraf Hendricks

It is unclear if the people who left today will return. It is also unclear what will happen to the refugees still living in the church

In September 2019 anti-immigrant protests broke out in Johannesburg. Later, five people were killed and a number of shops were looted after a riot broke out in the Alexandra township. Over 180 people were arrested. Melchi Kazadi said his shop was looted. He fled to Cape Town because of xenophobia and took part in the protest. He said he fled the DRC because of war.

“We are jobless. We are homeless. We have nowhere to go,” said Kazadi.

But hotel owners and staff, as well as traders on Greenmarket Square, many of whom are also immigrants, have criticised the protest and the City for not taking action against it. They will be hoping that the protest has ended as it badly affected their livelihoods. 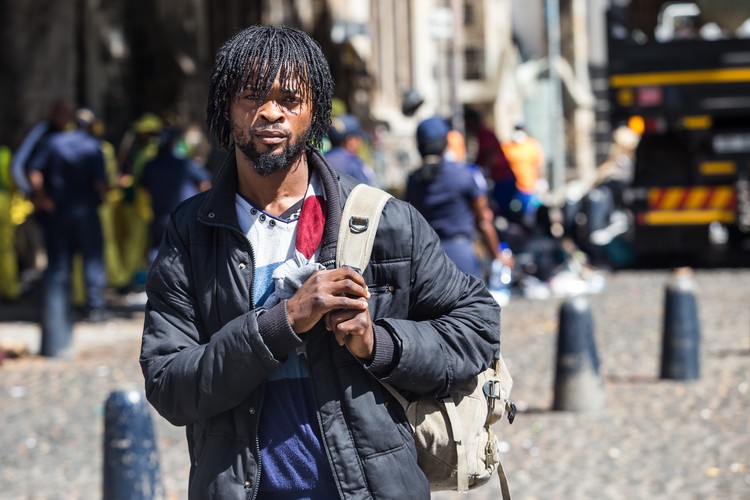 “We are jobless. We are homeless. We have nowhere to go,” said Melchi Kazadi, originally from the DRC. Photo: Ashraf Hendricks

Next:  Not much progress with Ramaphosa’s school sanitation campaign